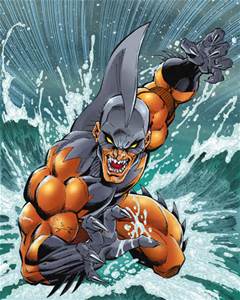 No Hair
Unusual Features
Fin on back extending over the head, fangs, claws, and gills.
Status
Citizenship

Little is known about Tiger Shark's life before his association with the Masters of Evil. It can be assumed to be similar to his mainstream counterpart.

At some point Tiger Shark partnered up with Attuma became an ally of the Masters of Evil. While they let the Masters obtain the Tomb of Asarius, the duo used the mind-control tech they acquired from them to take-over Atlantis. They were soon foiled by the Ultimate Alliance.

2 years later, Tiger Shark was advertised as one of villains the New Warriors would face off against.

Tiger Shark was among the supervillains recruited by the Hood into his crime syndicate. He was defeated alongside Armadillo by Luke Cage, Iron Fist, Cyclops, Iceman, Spider-Man, and the Lizard.

Tiger Shark's vitality is dependent upon regular exposure to water. The longer he is out of the water, most of his superhuman abilities rapidly dwindle. If he is removed from water long enough, it could prove fatal.

Equipment: Tiger Shark's costume is specially designed and contains a built in water system that constantly keeps his body wet. This keeps him in peak physical condition if he's out of the water.
Transportation: None known.
Weapons: None known.

Retrieved from "https://marvelcomicsfanon.fandom.com/wiki/Todd_Arliss_(Earth-6109.2)?oldid=259327"
Community content is available under CC-BY-SA unless otherwise noted.