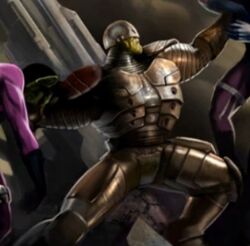 The Kree may have massacred thousands upon thousands of us... but that does not make my people exempt from their sins.

After losing his wife to the Kree-Skrull War, Titannus became dedicated to avenging her memory and gaining powers by any means necessary. This led to him enlisting in the Super-Skrull Program, where he ended up being tortured until his physiology made him indestructible.

Titannus became enraged, and swore revenge against his own people. He quickly became a public menace, tearing down labs and military bases across the planet. Even the Super-Skrull Kl’rt proved incapable of defeating him.

His rage eventually convinced him to send out a beacon that would attract the attention of the World Devourer Galactus. Eventually, his device proved successful, and Galactus arrived on Skrullos. He was enraged when the Earth heroes, the Avengers, tried to intervene and even found himself locked in battle against Captain America and Thor, who pleaded with him to come with them and escape the planet’s destruction. Titannus refused to go with them, and stayed with his planet to watch it crumble and burn until the very end.

Retrieved from "https://marvelcomicsfanon.fandom.com/wiki/Titannus_(Earth-101)?oldid=262773"
Community content is available under CC-BY-SA unless otherwise noted.