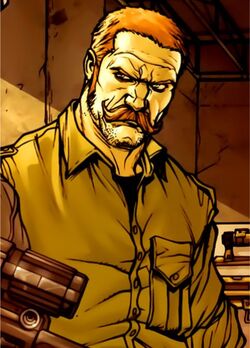 Timothy Aloysius Cadwallader "Dum-Dum" Dugan was born and raised in Boston, Massachusetts. He was born into a poor family of Irish immigrants. To make money, he perversely worked as a circus strongman. He was on tour in England on the lead up to World War II. When Germany invaded Europe and World War II broke out, Dugan willingly signed up for the army and served as an Allied soldier in the 107th along with Bucky Barnes and Gabe Jones, fighting in many battles against the Nazis and Adolf Hitler's science division Hydra, which would constantly invent new high tech weapons, using a mysterious power source, to destroy the Allied defenses.

During an intense battle against German soldiers, Dugan and his unit became pinned down and took cover in a crater, with no way to communicate with reinforcements. Together along with Bucky Barnes and Gabe Jones they fired upon the Germans until a mysterious and huge Hydra tank fired on the Germans. As the Germans retreated, Dugan and the surviving members of the 107th were captured by the tyrant, paramilitary organization.

Having been rescued from a Hydra prison camp with other soldiers by the heroic first super-soldier Captain America only a few days after their capture, he was recruited into the newly formed Howling Commandos and had fought alongside Captain America, Bucky Barnes, and Lieutenant Nick Fury. During their missions, Dugan and the Commandos became key in ending the war, helping to defeat Red Skull as well as Werner Reinhardt, along with convincing Baron Heinrich Zemo to end his dealings with Schmidt, Hydra, & the Nazis and help his nation restore peace and freedom to his motherland, and allowing the Allied forces to finally claim their final victory. Days nearing towards the end of the war, Dugan met a nurse at a US military base named Mary, the very woman whom he started a relationship with, and whom he was going marry someday.

It was also at this time that Dugan and most other Howling Commandos began their annual injections of the Senility Formula, a chemical they develop as an alternative for the Super-Soldier Serum during the war. Unfortunately the last remaining samples of the serums were destroyed after it's ship carrier was sunken into the bottom of the sea, after being targeted by a USSR submarine. Somehow they manage to save last one and injected it on Fury who was volunteering to be injected to serve the war once again, during the Cold War, another conflict the Commandos joined and served in since the Second World War with the CIA. Injections with this chemical was assumed to have greatly slowed his aging process like the original formula, but later on it showed to have the exact opposite effects.

Feeling the ultimately senile effects of the dangerous serum only several days after they were injected with it before everyone else, Dugan was the very first one among the Commandos to have the out of his system even before the serum itself would start festering Dugan's body. Thankfully, Dugan's wise decision had consequently saved his entire live, unlike his fellow Commando and friend General Nick Fury, whose took it long enough to affect him negatively, and was too late to have the serum entirely removed from his body, slowly causing for him to age in an accelerating rate in the process as he continues to exert more strength overtime, all so he could fully completely accomplish the last following missions, which eventually had saved a lot of lives because of his noble bravery and willing sacrifice.

The week since their missions had finally ended during the middle of Cold War, Dugan and some members of the Commandos have decided to finally retire officially, wherein Dugan had made an important decision to live a civilian life, spending more time with his loving and caring wife, Mary as they try and start a family of their own. The remaining Commandos had no other choice but to respect their ultimate decisions to move on, though it would have been an honor if they continue serving the country alongside the team. Before leaving with his wife to live in his old home back in Boston, Dugan and the retired Commandos were given, much to their gratitude of receiving them.

In honor of Steve's memory and the defeat of the Axis powers, the peace-keeping organization S.H.I.E.L.D. was founded by Peggy Carter, Howard Stark, General Chester Phillips, and Fury, who is now a captain general in the U.S. Army. While the first generation of S.H.I.E.L.D. has yet to begin flourishing, Dugan was currently raising his infant child, whom they had named Dan.

At some point in his consistent retired life, Dugan's mentee and young friend Nick Fury, Jr., who was an agent of S.H.I.E.L.D. at the time, came to him and his wife's residence out of the sudden, where Fury invited Dugan to join S.H.I.E.L.D., due to their long history together as good subordinates. Though he was flattered, he politely declined, telling him that he was already contented living with his family, something that Fury had respected. Unbeknownst to Dugan, Fury left a note in his room containing a cryptic message only he and the rest of his former teammates can understand, seconds before he left their house to continue his mission as an agent while Dugan continues to live peacefully with his family instead.

However, when a series of unfortunate and unexpected events came to Dugan's life in a blink of an eye, his entire life was changed for the worst case possible during the day of his wife and child's unexpected death, who was caught in a secret terrorist incident in a uncompleted building, which was planned by an unknown agency, something that was later covered up by the authorities as an deadly and serious case of "occupational hazard."

While heavily mourning for the loss of his family for the next few months, Dugan eventually came to meet Nick Fury after finding the cryptic message he left in his house, angrily confronting him whether the agency had anything to do with the death of his his family. Sympathizing with Dugan and convincing him that sincerely he wanted to help his friend, Fury admitted that S.H.I.E.L.D. had nothing to do with what's happened to his family, although he did tell him that the agency was willing to find out the undiscovered saboteurs who were responsible for their deaths. Because of this confession, Dugan eventually joined and served S.H.I.E.L.D., for the main purpose of finding out who really caused the demise of his loved ones and eventually avenge them in the process by bringing them to justice.

While working in S.H.I.E.L.D. throughout the next several years, Dugan was immediately involved with agent Natasha Romanoff and Steve Rogers when they uncovered a conspiracy following an assassination attempt on then-current director Nick Fury, which had eventually led to them discovering that Hydra had somehow been infiltrating their entire organization since it was poisoned by none other than the former Nazi scientist Arnim Zola.

When Dugan finally found out that former director, current leader of the Security Council and secretly a leader of Hydra, Alexander Pierce was behind the deaths of his family and many other innocent civilians, Dugan lashes out, leading to him turn against "S.H.I.E.L.D." itself after it was mostly overrun by Pierce and Hydra. Despite the efforts of the notoriously dangerous Winter Soldier and of Hydra's operatives to stop them, Dugan still secretly helped Rogers, Fury, and the rest of his fellow teammates to expose one of its known supreme leader, Pierce and the entire evil schemes of Hydra within S.H.I.E.L.D. to the world, which also resulted in all of her own morally dubious history being revealed to the world.

When the Nimrod Invasion was unexpectedly unleashed upon the United States of America as a part of Hydra's endgame after the events of Hydra Uprising, threatening the country into being torn apart by the organization's subsidiary group, the remaining anti-government militia faction of Hydra, which was revealed to be led by the state of Texas' own governor, Drew Daniels, who was also responsible for turning his state into an anti-government independent system. As a response, Dugan, S.H.I.E.L.D., and the Ultimates helped the return of Texas as a state of the United States, apprehending Daniels in the finale of the Battle of Texas, and continues to fight hostile forces across the world in completely ending the Hydra's Nimrod Invasion, once and for all.

On the heroes' first notable actions, they stopped a war between North and South Carolina that lasted for several days. Captain America led the Avengers during the battle for Wyoming against Hydra in which the heroes were triumphant and managed to reunite the shattered country. The chaos and destruction caused by the anti-government forces were eventually prevented further, thanks to the help of the reformation of the Ultimates' efforts on taking down Hydra in the wake of the attempt to tear the entire country apart.

Infinity Formula: Nick Fury's aging had been slowed greatly by the Infinity Formula, a serum that is actually a recreated version of the Super-Soldier Serum created by Dr. Berthold Sternberg. Dugan was first inoculated with the fully-developed serum in when he was in his . Due to its cumulative effect, Dugan no longer needs additional doses to prolong his life span.

Senility Formula (formerly): Even before he was injected by the Infinity Formula, he already volunteered to be injected by a recreated version of the Super-Soldier Serum, which granted him to gain superhuman abilities, same as the original serum. This made his extent at joining and winning several wars for more than a year, until Nick had been experiencing some side effects that he would age a little bit every time he exert his strength. The more he exerted himself, the faster he aged, which is due to his protein in his DNA being ravaged by oxidants and him suffering from oxidated stress. As an immediate response to this discovery, Dugan have the serum out of his system even before the serum itself would start festering Dugan's body, the same way it unfortunately did General Nick Fury's.

Retrieved from "https://marvelcomicsfanon.fandom.com/wiki/Timothy_Dugan_(Earth-61615)?oldid=234935"
Community content is available under CC-BY-SA unless otherwise noted.