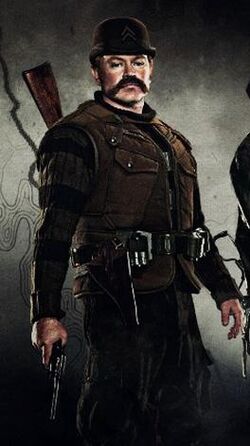 Timothy Dugan was a former circus strong man, working as a US army corporal until being captured by Hydra. He was soon rescued by Captain America, teaming with the Howling Commandos. Dugan participated in an attack on Schmidt's final base, using a Hydra's Tesseract-made shotgun and being helped by James Falsworth to control a HYDRA Tank in order to cause panic in the enemy lines. He is last seen in a radio tower and his fate is currently unknown.

Retrieved from "https://marvelcomicsfanon.fandom.com/wiki/Timothy_Dugan_(Earth-1010)?oldid=100024"
Community content is available under CC-BY-SA unless otherwise noted.