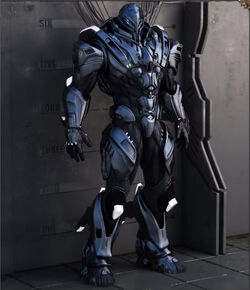 The Time Lords were an advance civilization from the reality of Earth-5680 created by Time and one of the three Chrononian races. During their early existence, they had already started to build their culture, and beliefs and were conducting experimentation of immortality.

In the next 300 years, the Time Lords were already a very advanced civilization with machinery, and advance technological advancements. Soon, they were able to leave the planet, and do travel in their local solar system, Meator System to which they were able to advance.

The Time Lord by the name of Galadon was able to create great technological feats that helps the Time Lords gain a for of immortality. Regeneration Reconstruction was the ability that was added to every Time Lords very DNA creating an triple'helix formation their DNA. It would completely transform them, new body, new face and personality. Galadon only said this can happen only 12 times, and the best part is they age very slowly. Example be that a Time Lord infant is only 300 years old, and would be considered ages 5-7 by Earth's standards. During this period, they were able to also invent interstellar travel, enabling to be able to perform galactic travel.

Due to their development, they found a whole new civilization called the Daleks, but their Diplomatic Fleet was completely eradicated. Due to this development. The Time Lords obviously view this as the declaration of war, and so the Time War began.

During the Time War, the Time Lords had been creating weapons of mass destruction against the Daleks. Each weapon capable of wiping out great quantities of matter. However, the Daleks' shield technology and offensive weaponry was more advance, and could withstand the Low-Tier Destruction Weapons with ease. However, they were unable to withstand the High-Caliber Temporal Charge Cannon which fires compressed time energy, and anything it hits, decays rapidly. The Daleks shield was depleted in seconds. The down side is, the weapon recharge cycle is over 56 hours. And so the High Council and the War Council orders the Technology & Development to organize the construction of a large planet mega-structure that would be called the Citadel that is capable of forming one of the most destructive weapons in the Multiverse. The Nexus rings.

After over 1000 years of fighting, the construction of the Citadel was finished, and that start the construction process of an Nexus ring. However, the Daleks caught on to their plan, and launched a major assault on the Citadel. However, a Time Lord called the Operator was able to create robots, and weapons that defended the Citadel against the assault by the Daleks for over 400 years until the first Nexus ring was finished, and ready for use. The War Council ordered the Operator to take control of the Citadel and go to the Daleks' home planet, Genesis, and and use the Nexus ring you destroy the planet.

When the Operator got to the planet via the Citadel, and released the Nexus ring. He fires the Ring which obliterated the entire planet into nothing. With no planet to go to, the Daleks were going to retreat, but were confronted by the Citadel itself, releasing the Nexus ring, and using against the remaining Daleks. Fully destroying the race.

The Betrayal of the War Hero

After the war ended, they ordered the arrest of the Operator as soon as he landed on the planet. When the CPD arrested and took him to the High Court. He was convicted, and sentence to exile on the planet called Exile and forced an regeneration from him. After that, the CPD takes him to the hunger bay to be escorted to exile.

It was later found out the Operator was able to take out the CPD escorts, and able to land on the Citadel, and kill all of the Time Lords on it. Then the Operator used the planetary mega-structure to created 12 Nexus rings, and was the entire civilization of the Time Lords was obliterated along with the reality of Earth-5680.

Habitat: Same has humans
Gravity: Same as Earth's
Atmosphere: Same has Earth's with tiny but more of carbon
Population: The Operator said it was over 67.5 billion. With children and infants taking up more then half of the population.

Their military is controlled by the War Council who gives orders to the Chrononian Military during the Time War.
Level of Technology: Superior then most species of the Multiverse, with a few exceptions such as the Daleks.
Cultural Traits: Cultural traits unknown.
Representatives: The Operator

Retrieved from "https://marvelcomicsfanon.fandom.com/wiki/Time_Lord_(Earth-5680)?oldid=199368"
Community content is available under CC-BY-SA unless otherwise noted.