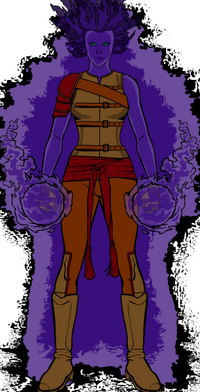 Many people say energy can be found in almost infinite amounts. Even the mind can manipulate an energy few can see and manipulate, now I am the living embodiment of psionic energy.

Tila is the oldest of twins, being a few minutes older then her twin brother, Titan. Born to a father who works as a builder for the city and their mother who serves as a historian and record keeper, the two have had a decent life. Both Tila and Titan have spent their younger years being rather carefree and enjoying the time with Inhumans their age. But of the two, Tila has always proven to be extremely adventurous and usually getting herself, her brother, and their group of friends into some rather troubling situations. More then once Tila has been known to venture out of the village borders,play pranks, and cause mischief.

During her child and pre-teen years not much changed for Tila other then her trying to create a path separate of her parents' expectations. It was mainly during her pre-teen years that between the twins she proved the most vocal, aggressive, and rebellious, forcing her brother to be something of her conscience. His calmer attitude did help to keep her in line but not always. She tended to skip lessons, not listen to the elders or her parents, and tended to continue to do her own thing much of the time.

Eventually though, Tila was able to find an outlet for her constant trouble making in the form of combat training. Almost immediately drawn to a warrior lifestyle, the young Inhuman female found herself right at home in the lessons and it served to be her primary discipline. But, as expected her preferred fighting style became evident in "offense being the best defense" belief and her fighting style proved to be extremely aggressive, quick, and brutal. With cleaning up her act though, Tila did finally become more serious in seeking a real role in life, coming across the subject of geology which captured her interest. Following this, she became a junior geologist training under some of the veterans when she was thirteen.

During those three years, she also began trying to convince her brother to get into training which failed until he finally conceded a year later. Not much to her surprise, Titan proved a quick study in combat but showed reluctance to learn anything above defense maneuvers which Tila respected and did not press for her brother to beyond what he was comfortable with. Likewise, Tila continued down her own path in becoming a geologist while eventually also being given the task of being a city guard following passing the final test in her warrior training.

Upon turning sixteen, Tila and Titan were tested like many others in their generation to be able to undergo their genetic change. After a few weeks of processing, both were found capable of reaching their genetic potential much to the delight of both. Being the handful that could the two were eventually taken away from Orollan's main city to a special chamber in which they were given the Antigen Nectar that allowed them to undergo the necessary process that would unlock that potential.

Unfortunately, there was an irony in the change as Tila didn't receive a rock-based form like she had hoped, instead this particular change going to her brother. But she got an energy-based form of raw psionic energy, causing Orollan scientists to classify her as potentially being a particularly powerful Inhuman.

Equipment: Sometimes equipment for when she is helping Orollan scientists in the field or in the labs.
Transportation: Her own power
Weapons: Her own powers, varies

Retrieved from "https://marvelcomicsfanon.fandom.com/wiki/Tila_(Earth-69112)?oldid=139173"
Community content is available under CC-BY-SA unless otherwise noted.