-Young Avengers, this is your new teammate, David.- Captain America introduced him.

After considering it for a second, the Doctor looked up at the teenagers. -I’ll give him his memory back.-

Dr. Strange walked to Wiccan, his cape flowing behind him. The magician put his hands on the mutant’s temples, as a bright blue glow started coming out of them.

Hulkling put his fist against his mouth, biting his thumb nervously. Kate Bishop put her hand on his shoulder, rubbing it gently.

The Eye of Agamotto hanging on the Sorcerer Supreme’s chest started shaking and glowing green, as the Doctor murmured spells.

-Circle of Renewal… Visibility… Detoxify… Annulment…- The room was bathed in the green light emanating from the amulet on wielded by the magician. -The Light of the All-Seeing Eye of Agamotto!!!-

-Are you sure about this, Locksmith?- Tick Tock asked his partner, who was trying to break into Greer Grant’s house.

-Have I ever failed you, Tick Tock?- The other asked, forcing the lock on her door.

-N-No… But she’s a real superhero… The others we have stole from before are just… Weak.-

-Stop being a coward and help me.-

Putting his hand on his pocket watch, Tick Tock saw a glimpse of the future in which Locksmith was getting kicked by Tigra.

-Please don't make me break a claw on your forehead.- Tigra rolled her eyes at the two burglars. -Don’t even try it.-

Locksmith pulled out a chain, ready to restrain the cat hero. She smirked and leapt forward, kicking his chin.

-Tick Tock, let’s go!- Throwing a smoke grenade to the floor, the two costumed individuals escaped from the model’s house.

-Is it done, Doctor?- Hulkling asked the Sorcerer Supreme.

-I certainly hope so. I have used every annulment spell that is on the Book of the Vishanti.-

-What about the Darkhold?- Prodigy asked.

-How do you know about that book?- Dr. Strange asked sternly.

-I… I absorb knowledge from people around me subconsciously… I… I didn’t mean to do it.-

-At least it means you have more magical knowledge than any of them… Now Clea can’t say I brought you without knowing what you were walking into.-

-What did you need from Billy, Doctor?- Kate asked the magician.

-Dormammu’s creation, Satannish has been appearing to humans and granting them superhuman powers in exchange for their souls. We need to stop him from doing that ever again.-

-Are you sure about this, Locksmith?- Tick Tock asked, as his partner drew a downward-pointing pentagram with goat blood.

-Have I ever failed you, Tick Tock?- The other man smirked, looking back at his partner.

-You dare to summon Satannish?!- Dormammu’s creation appeared before the burglars.

-He did it!- Locksmith pointed at the bald man. -He said he wanted you to give us powers.-

-Is that true?!- Satannish got extremely close to Tick Tock.

-I wonder… Can you truly face the fire?-

-I can.- Locksmith smiled cockily.

-We will see that.- Satannish muttered, as flames engulfed the two burglars.

-Who?- Stature asked, looking at the Sorcerer Supreme.

-I guess the Young Avengers are going to Hollywood.- Speed commented.

-What about Billy?- Hulkling asked.

-He’s staying here.- Kate Bishop looked at him. -The Avengers will take good care of him, but we need you there.-

-She’s right. If this demon is second only to Mephisto, then we need as much help as possible. Clea and Wong are probably there already.- Dr. Strange informed the teenagers. -Gather around, Young Avengers.- As the teenagers got close to him, he teleported them to Los Angeles.

Once the fire dispersed, Locksmith’s body was reduced to ashes. However, Tick Tock now had the power of chronokinesis.

-It turns out you were actually strong enough… However, your partner was a mess. Now you have the power to control time… Do not use it wisely.-

Suddenly, Dr. Strange and the Young Avengers appeared on the street outside of Locksmith’s apartment, where they met up with Clea and Wong.

-Strange…- Satannish muttered. -It is time for you to try your new powers, Tick Tock.-

The mutant nodded and walked outside, holding his pocket-watch on his left hand.

-Move aside.- The Sorcerer Supreme held his hand at the burglar.

-I got no time for you, my boyfriend is injured and I’m not there because of you!- Hulkling flew towards the mutant.

Holding his hand out at the two Young Avengers, Tick Tock sent them to a place out of place and time.

-Teddy!- Kate screamed, firing an arrow at the burglar.

-We need to stop Satannish!- Dr. Strange tried to walk inside the apartment, but hordes of Mindless Ones came out of it. -Dormammu…- Strange muttered.

The remaining Young Avengers, Clea, Wong and the Sorcerer Supreme started battling the Mindless Ones and Tick Tock.

-Where are we?- Hulkling looked around what seemed like never-ending emptiness, as he and David laid on the ground.

-You can just absorb my knowledge and that’s worth nothing.- Teddy pursed his lips.

-I can’t do anything because magic is mainly irrationality. Never been much good at that… But don’t be so hard on yourself… You’re extremely valuable to the team. I can tell.- David put his hand on his teammate’s shoulder.

-It means a lot right now.- Hulkling looked at him and smiled. -Thank you.- After a brief moment of silence, Teddy broke the ice. -So what’s the plan?-

-Now we run. Hide. Hold out until a rescue. This is way outside my zones of expertise. And my zone of expertise is pretty much everything.-

-So the plan is basically “don’t die”. I like it…- Hulkling put his hand on his teammate’s shoulder. -Don’t worry. They won’t leave us.-

-And if worse comes to worst?-

-I wish I could say the same.-

Suddenly, Prodigy leaned in and kissed Teddy, who was taken aback by this.

-Where did you send Teddy and David?- Kate aimed an explosive arrow at Tick Tock.

-It’s out of your reach, Archer Girl.- The mutant chuckled. -I sent them to a realm out of space and time.-

-I… I can try to reach them!- Iron Lad exclaimed, firing repulsor blasts at the Mindless Ones. -I have Kang’s tech in this suit of armor.-

-Is it dangerous?- Stature asked, punching one of Dormammu’s minions.

-Extremely dangerous, if I may interrupt.- Wong replied, kicking one of the henchmen.

-It could trap all of them in that realm forever… Flames of the Faltine!- Clea added, firing a fiery blast at a Mindless One.

-It’s the only way to save them.- Nate replied. -Cover me!- He flew into an ally and started working the interface.

-We need to get in the apartment and close the portal with Satannish on this realm!- Dr. Strange ordered attacking Mindless Ones. -That way we will keep him away from Dormammu’s protection!-

-I got this.- Speed commented, but when he started running towards the apartment his super-speed wasn’t working. Looking at Tick Tock, Tommy saw the burglar holding his hand out at him. -That son of a b—-

-Strange!- Kate yelled. -Take me to the apartment, I’ll take him down.-

-Are you sure?- Clea asked.

-These two messed with MY team and MY friends… I will make them pay.-

Using telekinesis, Dr. Strange moved Kate’s body inside the apartment, which was full of Mindless Ones walking out of the portal opened by Locksmith.

-Do you want superpowers as well?- Satannish smirked.

-No, I’m just a girl with a bow.- Bishop snarked back and fired three explosive arrows at the demon. Then, she aimed at the floor and fired another one at the candles and pentagram, trying to close the portal. However, when the smoke of the explosion was dispersed, Satannish wasn’t there anymore.

-Seriously! Talk! What was that about? I mean, I’m complimented but taken, and… WHAT?!-

-It’s simple. And complicated.- David sighed. -Basically, if we’re going to die here, I had to know what it was like to kiss you. I kinda hope we do die now.-

-You’re gay, though? Since when?- Hulkling asked. -Your wiki page needs an update.- He murmured.

-I’m bi.- Prodigy breathed out. -Never said that out loud. I realized, well, you know how my power works? Picking up everything except powers from people? Well, I got EVERYTHING. Skills, talents… Ad some other stuff. I got EVERYTHING.-

-No. That’s the strange thing. It was like an awakening. It was like realizing something that was always true and I just couldn’t see until now. It was like all the rooms in my head opening.- Prodigy looked down at his hands. -Didn’t matter, though. In the last few years I’ve always been about the work. Mutantkind. Saving the world. Never really left time to… Well, be with anyone. And now? Facing death?- David looked up at Teddy. -You’re so good with Billy. Who wouldn’t want a slice of that? Even for a second? Everyone says how perfect you are together. I don’t think they see it’s only perfect because of you.-

Hulkling looked up and then back down, blushing. -Hah, you know nothing, David Alleyne.- He looked up at his teammate. -We’re a mess. A happy mess, but a mess. Mostly I’m scared to death. He’s a reality warper. I suspect… He could be making me love him. Not deliberately or anything, but…-

-Yeah. I’d hate that.- Prodigy looked up at the shapeshifter. -You know, if I were you? If I got out of here? I’d get some space to see if it clears my head.-

Suddenly, Iron Lad appeared before them.

-This is a realm where space and time don’t work… I could come here using Kang’s technology and it took a lot of energy… I can try to get us three back but there are no guarantees.-

Prodigy and Hulkling looked at each other.

-I have nothing to lose.- David shrugged.

-I do… That’s why I need to take the chance.- Teddy nodded.

The two Young Avengers hugged Kang’s younger self and the three of them disappeared.

Back in Los Angeles, the three Young Avengers reappeared. Kate, who had walked out of the apartment ran towards Hulkling and hugged him, while Stature congratulated Iron Lad.

-What happened here?- Prodigy asked, looking at the Mindless Ones dispersed around them.

-Dormammu.- Strange muttered. -Thanks to Katherine we could stop them, but Satannish escaped.-

-And right after that, Tick Tock froze us all until he was way out of sight.- Clea rolled her eyes.

-Can you take us back to the Mansion?- Teddy looked at the magicians. -I need to talk to Billy.-

Hulkling knocked on the infirmary’s door, where Wiccan was laying awake.

-Come in.- The mage smiled, sitting up.

-I need… We need to talk.- Teddy pursed his lips, looking down slightly.

-I see Billy shatter. I try to work out how I could change into something to protect me, or him. There’s got to be some form I can take that doesn’t hurt anyone. My power is useless here. I just tell him everything. He asks me to stay the night. I say no. I may change my mind. And with a wisdom, fear and strength I didn’t expect…-

-He understands. It makes everything worse.-

Teddy walked out of the infirmary, teary eyed.

That night, William walked out of bed. He walked to the room he shared with Teddy and held his hand one last time. Picking up his costume, he suited up and, as Wiccan, headed off out of the Mansion.

"You dare to summon Satannish?!"

Dr. Strange vs Mindless Ones

Dr. Strange vs Mindless Ones

The Young Avengers, Dr. Strange, Clea and Wong vs Tick Tock and Mindless Ones

(His Wiki page has been updated since then) 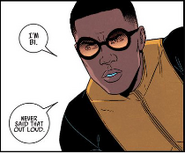 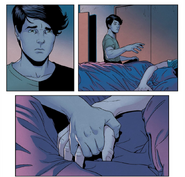 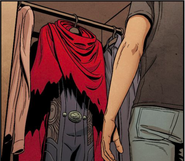 Wiccan leaves the Avengers Mansion
Add a photo to this gallery

Retrieved from "https://marvelcomicsfanon.fandom.com/wiki/Tik_Tok_(YA)?oldid=175380"
Community content is available under CC-BY-SA unless otherwise noted.