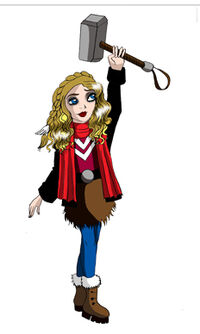 Thrud was born to Thor and Lady Sif in Asgard, and was left in ignorance of Midgard for years even if she knew her parents often fought there. One of this battles could have turned to complete drama: Loki took her mother's body, while Sif herself was stuck in the body of an old dying midgardian woman. Sif finally took her place back, and Thrud was kept safe in Asgard during Dark Age.

Right after it, Thrud insisted to met and comfort May Parker whose father was once victim of a soul exchange too.

She also befriended kids of others Avengers since this period.

She does not know much about Midgard as she only lives there for long since her arrival in Hero High.

-Thor is usually childless in Marvel verse, but had three children in mythology (Magni, Modi, and Thrud) Only Magni appeared in a parallel world, mothered by Amora/Enchanteress instead of the giantess Járnsaxa in myths. Thrud was her daughter and Sif's in mythology, explaining her presence here.

-Thor had a daughter named Torunn, but only in animated movie Next Avengers (2008)

-She was reputed for her sword skills and was a Valkyrie. Thus, Thrud have like them the power to turn into a swan.

-She take inspiration from the heroin known as Valkyrie in appearance, and share her feminist views.

Thrud as she appears in Norse mythology 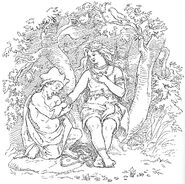 Thrud and Alviss, her Nibelung husband in myths

Torunn in Next Avengers
Add a photo to this gallery
Retrieved from "https://marvelcomicsfanon.fandom.com/wiki/Thrud_(Earth_1-616)?oldid=233669"
Community content is available under CC-BY-SA unless otherwise noted.