See also Avengers (Prime Universe) Member for a complete list of references to distinguish between these closely named or closely related articles. 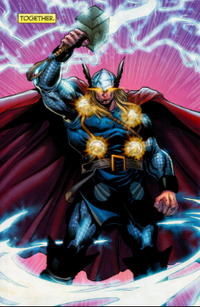 Thor has been considered the most powerful Avenger. He has the most powers out of the entire team and this shows because of how he has to constantly hold back so he doesn't kill anyone. He even holds back more than Spider-Man.

Thorforce: After Ragnarok occurred, Thor's father died and Thor practices Rune Magic, he gained the Odinforce. With these two abilities combined, he named it the Thorforce. He gained many abilities.

Godlike strength: Thor has limitless strength and can power himself even more by charging himself with lightning. He was able to bend Captain America's shield, then bend it back perfectly back to shape. He's the second strongest Avenger. He is the mightiest. He was able to lift a planet, knock Thanos back yards with one punch, hold back the Hulk with one hand, nearly killed the Beyonder with just his brute strength, etc.

Godlike speed: Thor can move beyond warp speed. He is the fastest out of all the Avengers (He's faster than Hulk when Hulk is at his prime). He is able to keep up with the Beyonder, is much more faster than Quicksilver, Speed blitzed Hyperion and Speed Demon, at the same time. Thor is even faster than teleporters and the Silver Surfer even when he's enhanced by more Cosmic energy.

Godlike Durability: Thor is basically indestructible. He was able to take multiple punches from Hulk, got his own energy redirected at him, was crushed by Galactus, but walked all of it off. He's taken the most damage. Thor usually gets knocked down a lot because he knows how powerful he is so he holds back because he likes a good fight. Sometimes he likes the feeling of getting knocked out or feeling in danger.

Godlike Stamina: Thor has learned how to battle for a long time. In a battle with Gorr, they fought for centuries and Thor came out on top. He didn't even feel tired. He had a fight when Thanos that lasted for a long time, and even though it was brought to a stalemate, Thanos was clearly more exhausted than Thor (Thanos was drained of some of his energy though).

Superhuman Dense Tissue: Thor's entire body is nearly indestructible. When US Agent punched Thor, his fist was broken for six weeks. When a car at full speed came at him, it broke on impact. Thor has some of the most Dense Tissue out of the whole team.

Healing Factor: Thor has an extreme healing Factor that works 300 times faster than Wolverine's. He even mysteriously healed from a disintegration beam. His body can heal from the most intense and dangerous amount of damage that could kill Gods.

Electrokinesis: Even without Stormbreaker or Mjolnir he can shoot lightning or produce it from his body. He can even charge his body with electricity. He can enhanced his punches using electricity and can launch himself in the air. He has stronger electric blasts than that of Power Man. He can call large storms of lightning from the sky and can even make it rain lightning. He can shoot lightning bolts and his lightning is more enhanced that Storm's and Dracula's. He can also teleport using lightning.

Earth Manipulation: He can shoot quakes from his hands and can control Earth and rocks. He can create cracks in the Earth and can even enhanced his strength and punches with his quakes and can launch himself in the air.

Super breath: One of his rare abilities is his super breath. He can produce hurricane like winds and can blow away his enemies. It can rival that of Gladiator and Hyperion put together. It can even rival Hulk's yell (That's similar to a sonar scream that blows enemies away)

Flight: Thor has been shown to fly and levitate without his hammer, but he doesn't fly as fast.

Self-Sustenance: Thor can go weeks, months, and even years without food or water. He doesn't need air or sleep. He can even breathe in the vacuum or space and can breathe underwater.

Dimensional Travel: Thor can travel through dimensions with just his bare hands and can even trap people in other dimensions.

Vast Energy Manipulation: With the Odinforce, Thor is able to manipulate multiple energies. He's even able to shoot it from anywhere from his body. Even from his eyes, chest, hands, etc. It's not heat vision it's similar to how The destroyer shoots energy from his mouth. He's been known to even melt beings with just a look.

Nonexistence: An ability Thor rarely uses is the ability to make living people, objects, or anything alive or non alive instantly erased.

Size Alteration: An ability he also uses rarely is the ability to change his size. He's only used this on two occasions. He's used it in space. He grew to view what was going on in the universe as if he was a skyfather. The second time was his battle against Galactus.

Rune Magic: Often a alternative for the Odinforce, he uses Rune Magic often to avoid going into the Thorsleep. His eyes turn blue when he uses Rune magic. It augments everything about him. He even was able to pull off Loki's head without killing him, stop the Juggeranut with one hand. Used enough magic to turn Red Hulk back to General Ross, can break dimensional barriers, can enhance his five senses to the point where he has a form of supervision where he can occupy the Universe itself and even pluck his eyes out and easily regenerate them, able to erase beings from existence, defeat Mangog on multiple occasions, knock out kurse with the flick of his finger, teleports Beta Ray Bill to the other side of the galaxy and is able to communicate with him telepathically, and his most impressive feat: Destroying Yggdrasil and Those Who Sit Above In Shadows, and also ends the cycle of Ragnarok, all in one blast.

Memory Alteration: Thor is able to alternate memories of others. From to making people forget something or an whole different experience all together. Peter calls this, "The Jedi Mind Trick."

Allspeak: Thanks to the Allspeak Thor can communicate in all of the languages of the Nine Realms, Earth's dialects, and various alien languages.

All-Tongue: When Thor speaks with the All-Tongue anyone who hears him will hear him speak their native language in their hearts.

Retrieved from "https://marvelcomicsfanon.fandom.com/wiki/Thor_Odinson_(Prime_Universe)?oldid=232749"
Community content is available under CC-BY-SA unless otherwise noted.