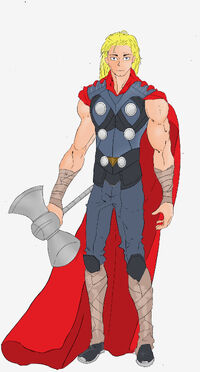 Dating
Occupation
Adventurer, protector of the twelve realms, former prince of Asgard, Physician, surgeon (as Blake); U.S. government super operative, superhero
Education
Tutored by scholars of Asgard, Doctor of Medicine (MD)
Origin
Origin
Asgardian, god to the ancient Germanic people, the Vikings and other Scandinavians, who was forced to learn a lesson in humility by living as a human.
Place of Birth
Asgard
Creators

Thor was a spoiled prince who had never left the confines of the walls of Asgard. He grew up side by side with his younger brother Loki (whom he did not know was adopted). Thor and Loki were brought up by stories told to them by their father, Odin, about the past, especially the last Great War between the Asgardians and the Jotuns. The young Thor seemed especially eager to show his father that he wanted to be a great warrior in the image of Odin when concerning the Frost Giants.

When he got older, Thor led an active, adventurous life in Asgard, doing battle with Frost Giants and other enemies of the twelve realms. Odin watched Thor become more and more arrogant. Over the years, Odin grew increasingly dissatisfied with Thor's headstrong behavior and excessive pride. On one occasion Thor violated a truce between the Asgardians and the Frost Giants after they had infiltrated Asgard to steal the staff of ancient winters, thereby killing their king Ymir and started another war. Finally, while Thor was engaged in a brawl with his fellow Asgardians, Odin summoned him to his presence.

Odin decided that he needed to be taught the meaning of humility, and to accomplish this lesson, Odin had Thor surrender his hammer to him and vanquished Thor onto Earth, releasing him of his royal armor. The latter being placed on the Mjoln'r with a enchantment that could only allow those who it deemed worthy to lift it and give them the power of Thor and he hurled his hammer through the void as well. While on earth, he was found by Doctors Erik Masterson and Jane Foster. When he came to, Thor found himself not remembering what just happened to him.

Ten years later in Oklahoma City, Thor now goes by the name of Donald Blake. He came to care for the sick and dying, first as a medical student, and later as a successful physician. One night, Blake is enjoying a night out at a bar with his girlfriend Doctor Jane Foster, his best friend Erik Masterson, and EMT driver Darcy Lewis. Their night however is cut short when Blake became so drunk that he ended up fighting a dozen of men and with his enhanced strength and durability that was still maintained in him, he was able to defeat all most all of them. Then a strange man entered the bar and began an impossible tale. The man claimed to be Loki, and he has searched for Blake for 10 years. Loki then raised his hand and a spear materialized in it. He then pointed the spear at Dr. Blake, but before he could strike at the doctor; a group of three strangely dressed men intervened and turned the tables on him. Loki then retreated in a cloud of smoke.The three men introduced themselves to Donald Blake as the Warriors Three; Fadrall, Volstagg, and Hogun. The three claimed that Blake was more than a mere mortal, but their master the Norse God Thor and needed his help on reclaiming Asgard from his evil half brother Loki. While in the state of confusion, Blake then passes out from the alcohol.

Back at Donald Blake's penthouse, the Warrior's Three are attempting to convince Blake he is indeed the god of thunder and they suggested him to come with them to Norway to retrieve his hammer. Like any sane person Blake refuses to believe them until Odin planted within Blake's mind to go there.

They arrived at the site to find it covered by a makeshift research facility only to be confronted by Amora, Skurge and a party of Frost Giants, who immediately attacked the Warriors Three. Despite their combined strength, the Warriors Three were no match for Loki's disciples and the Frost Giants and with his protectors disabled, Donald made a run for the hammer. As he picked it up however, Donald was transformed into his true godly form of The Mighty Thor; The Warriors and Thor battered the Frost Giants to oblivion and with his new powers, while Loki's followers quickly vanished back to Asgard. Before he leaves Jane reveals herself to be a SHIELD agent sent undercover to assess him and gives him a communication device in case he is needed again.

Heimdall eventually answered and affected the Asgardians' return. Returning to Asgard, Thor was shocked to discover the city in ruins. Thor flew to Odin's chamber to see Odin still alive. Thor then discovered his treacherous half-brother, Loki and Laufey; the new king of Frost Giants, mobilizing the Frost giants for takeover on Midgard. After being spotted by Loki, who was shocked to see him shared a brief verbal exchange, Loki revealed that he was the one that set everything in motion in that led to Thor's downfall so that he could finally become king and plans to rule all of the nine realms and threatens to kill Thor and Odin to make sure of it. Loki and Thor then got into a heated battle.

After Loki sent Thor flying through the wall of the chamber, Loki headed to the Bifrost where he began plans the process of destroying Midgard and rebuilding it in his image, not until Thor flew after him and confronted him again but was opposed by Laufey, who wanted revenge after Thor killed his father Ymir. The two were able to sustain brutal attacks from each other until Thor was knocked unconscious Odin then awoken freshly from his odinsleep and helped Thor defeat Laufey, they were then joined by Warriors Three, Hercules and the rest of the Asgardian soldiers moments later during the fight. Regaining consciousness just as Skurge was moving in for the kill, Thor's Mjolnir strucked him out as it was calling back to Thor. As Loki led his army of Frost Giants (alongside his followers) in an assault on Oslo Norway, Thor and the heroes followed them and fought bravely. And as this where going on, Jane, Erik and Darcy Lewis began evacuating everyone from the town until the heroes finally managed to beat the villains and save Earth and it's inhabitants. Later, Odin decides to imprison Loki in the limbo dimension, where he can do no harm and as with Skurge and Laufey; they're imprisoned back in Asgard to receive their eternal punishment while Amora is still on the loose in Midgard, walking amongst the humans.

Hercules, the warriors three and the Asgardians celebrated their victory, Thor went to go see his father to promise that he will always be there to protect Asgard if threatened, but Odin tells him that he's still exiled from Asgard and would have to prove himself once more by protecting Earth from threats that mankind couldn't handle on their own, if he wishes to return home. Thor understands and returned to Midgard and Jane shortly thereafter for a lasting stay. At first Thor still had no memory of his past life as an Asgardian god, although as days passed, more of his memories returned.

Over the course of the next year, Thor participated in a multi-realm war without the permission of Odin. Every since Thor's disappearance and Loki's Ragnarok, many of the worlds they protected had descended into chaos. Now with the return of Asgard, The asgardians were once again able to restore order in the nine realms. Earth also played a small part when Thor was briefed on the Skrulls and sent to investigate a suspected Skrull base in Micronesia. Finding the base abandoned and about to explode, they were saved by Iron Man's force field. Once Skrull fleets appeared worldwide, Thor brought the survivors to New York, and alongside Captain America, Ant-Man, Wasp, Black Widow, Hawkeye and Nick Fury, Director of S.H.I.E.L.D. Thor helped Iron Man provide air support against the Skrull spacecraft until the Air Force arrived. Following the battle, Thor became good friends with Tony Stark and Steve Rogers, pledging his support whenever lives were in danger.

Thor vs The God of the Dead

Class 100+; Thor is one of the physically mightiest beings in the universe. He can lift tremendous weights. While the exact amount of weight he can lift isn't known he can easily lift far in excess of a 100 tons. However, as high as his strength may be, it is nowhere near to the superior level of strength his mainstream counterpart has demonstrated

Equipment: None known.
Transportation: Thor is capable of hurling Mjolnir with great force and, by holding onto the leather thong, is capable of flying through the air at tremendous speeds.
Weapons:

With Mjolnir, Thor can project powerful mystical blasts of energy. He can even channel energies for stronger energy attacks. with it, it obeys Thor's commands as it were alive. It will return to Thor whenever he throws it at his opponent. There is also an enchantment on the surrounding Mjolnir, Preventing it from being wielded by anyone who is not worthy of the Mjolnir. By summoning lightning from the sky into Mjolnir, Thor's clothing was transformed into his battle armor.

Retrieved from "https://marvelcomicsfanon.fandom.com/wiki/Thor_Odinson_(Earth-981)?oldid=236699"
Community content is available under CC-BY-SA unless otherwise noted.