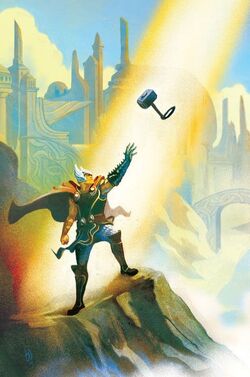 Earth-61616
Base Of Operations
Mobile on Asgard; formerly the Avengers Tower, and Earth
Characteristics
Gender

Widowed
Occupation
Asgardian God of Thunder, guardian deity; formerly the Prince of Asgard and King of Asgard
Origin
Origin
Asgardian, god to the ancient Germanic, Vikings and Scandinavians, who was forced to learn a lesson in humility by living as a human (Son of an Elder God and of an Aesir hybrid)
Place of Birth
Asgard
First appearance
Last appearance
Modern Comics: Dark Age Vol 1 1
Modern Comics: Dark Age's Thor Vol 1 7

By the great power of the All-Fathers, you shall die by my hands, you glutenous behemoth! And as you have caused the great prophecy of Ragnarök, the realm Asgard will fall with my own reign, and so will you...

Before the years of Ultron Revolution, Thor seemed to have the same history with his Earth-61615 counterpart, until Ultron started an all-out war against humanity and those who dares to oppose him and his ideologies. Although at some point in his life (before the Ultron Revolution), Thor finally went back to Asgard to become the new king after his father Odin, along with more than a thousand warriors, ultimately lost their lives at the hands of the fire demon Surtur, after willingly sacrificed themselves to prevent the prophesied Asgardian apocalypse, Ragnarök, from ever coming to a nightmarish reality. Upon gaining the title of Asgard's new ruler, King Thor also gained the new moniker of Lord Odinson.

At some point in time, Thor eventually fell in love with his long-time friend and fellow comrade, Lady Sif, finally reciprocating the love she had been keeping from him for the past several years. Only a few months after their royal marriage, they conceived and raised a bright, courageous, and courageous daughter whom they had named Torunn. Unfortunately, when the Avengers and most of the Earth's mightiest heroes fell against the forces of Ultron, he couldn't participate in the great war that would have lasted for a decade, as much as he hoped to do so, since Thor himself and his kingdom has come face to face with many countless dangers and dilemmas (e.g. the Skrulls, the Kree, the Chitauri, Gorr the God Butcher, Celestials, and several more threats) that could potentially threaten the entire future of Asgard.

During one of those dangers the new king of Asgard had to face, Thor unfortunately lost his mighty weapon Mjolnir after fighting the Frost Giants out of the realm through the Bifrost Bridge, along with his one eye, banishing the hostile invaders back to theirs. Unbeknownst to Thor, the Mjolnir actually makes it way to the same portal located in New Mexico, where it first landed to Earth. Although on a later time concurrent to the Year 1 of the Ultron Revolution, when Asgard was once again under attack by a powerful fleet of the Phalanx Dominion, whose race attempted to invade the realm.

As an instant response, Thor and the armed forces combined all their efforts to defeat the extraterrestrial invaders and defend their planet. During that very day, the Asgardians would have finally faced their ultimate doom, if it weren't for the unexpected arrival of Thor's long lost son with his former lover Jane Foster, Modi, who coincidentally came with the Mjolnir on his possession and is now grown up as an adolescent, same as his half-sister, only slightly older. Little known to Thor, Modi and Heimdall was already in close contact to each other since Jane Foster called to him, several months after Thor's departure from Earth.

In the aftermath of their victory against the Phalanx invaders, the Mjolnir was finally given back to Thor, where it belongs, while in return, his father had promised to give him the ultimate Asgardian weapon (even more powerful than the Mjolnir), dubbed the "Stormbreaker," when it was time for him to be the successor to Asgard's throne. Along with it, Modi explained to his father everything that was going on Midgard, telling him the earlier events of Ultron Revolution and how his mother, Jane, lost her life because of it, much to Thor's despair. King Thor and Queen Sif then gave Modi settlement in Asgard, and pledged to raise Modi with all their care and efforts, loving him the same way he and Sif loves Torunn, to which he delightfully appreciated and was thankful for.

For the next fifteen months, Thor and Sif had been training both his son and daughter side by side, with him telling his children about the lessons, morals, and stories that his father Odin had once taught to him when he first grew up. Upon hearing those teaching from her father, Torunn was so inspired and even took all of it to her heart, since she wanted to become like her parents, a courageous and selfless hero risking her life to protect Asgard, and the entirety of the Nine Realms. On the other hand, however, Modi barely cared about his grandfather's moral ideologies, which made him develop a ruthless, ravenous, stubborn personality, turning him to a more bloodthirsty, barbaric, and competitive warrior whose only motivation was to become Asgard's next rightful heir and to have the Stormbreaker sooner, rather than a good-hearted, righteous, selfless defender. In doing so, Modi even almost killed his own sister in a sparring, all because he wanted to pass all the tests needed for him to become a publicly-recognized warrior of Asgard.

Little known to both of his parents and younger sister, Modi was actually bonding with his adoptive uncle Loki, whom he frequently visits his cell in secret, since he first trained as warrior and king. And as time progresses, Loki also taught his nephew a few sorcerer abilities, along with his own ideologies that conflicted the ones his father taught him, which caused Modi to be manipulated and changed his views towards his father in the first place. When first finds it out from Torunn, he and Sif wasn't fully convinced, seeing Torunn's suspicions as an act of jealousy, rather than a genuine concern towards her brother.

However, when Thor finally finds out the truth the second time, he lashes out in rage, furiously approaching Loki for manipulating his own son in Loki's own schemes and with it, he tried to warn and threaten Loki after entering his cell, only to be revealed that Thor was interacting with his illusion. Without Thor nor any of the Asgardians immediately realizing it, the God Of Mischief was already freed by Modi earlier, and following the escape had the former brutally killed Heimdall inside the Observatory all so they could gain access to the Bifrost Bridge. Once he ultimately knew what the two were up to, Thor tried to catch up, but it was too late since the two have taken Heimdall's sword, the Hofund, and has already made it to Jotunheim, much to Thor's confusion to why.

Additionally, Loki and Modi also used the Odin Vault's Eternal Flame to resurrect the deceased army of the Einherjar into the form of armored skeletons, who were all long buried beneath the vault, right before they proceeded to the Bifrost. In that way, the raging undead would distract Thor and the Einherjar while Loki and Modi proceeded their unrevealed schemes on Jotunheim. Along with it, the resurrected army was also coerced under Modi's spell, turning the undead to unleash chaos throughout the city. The next few hours since the two escaped, what Thor only did was break down in devastation, not because Loki has escaped custody, but because of his unconditional concern for Modi, while Sif was there to comfort and calm him down and Torunn finds a way to reactivate the Bifrost using the Odinsword, to which she proved successful.

As the Bifrost finally opens once more, the portal hauntingly reveals a critically-injured and exhausted Modi, who falls into the arms of his father, mournfully apologizing to him and his family for betraying them. Thor comforted Modi in response, telling him that none of it was ever his fault and he was manipulated by Loki in the first place. Modi also confessed that it was his fault to what happened to his uncle, although he never specified to what exactly happened to him back on Jotunheim. After informing them about Loki's demise, Modi warned his family to close the Bifrost immediately. Torunn tries to remove the Odinsword from the Bifrost, though the latter was already too late, and they could only watch in horror as the threat Modi was warning about comes out of the Bifrost, revealing to be the Devourer of Worlds himself, Galactus. Due to the enormous devourer's immeasurable size, the entirety of the Bifrost subsequently collapses as he recklessly enter the Asgardian realm, forcing Thor and his family to flee the area before warning all the citizens of Asgard to evacuate Asgard itself through the Asgardian spacecrafts, Skiffs.

At this very moment, Thor hauntingly realizes that his was on the verge of destruction, with his people threatened to be on the brink of extinction since Surtur's attack during his father Odin's reign. During the massive evacuation of Asgard, Thor and Sif temporarily remained on Asgard as they distract the Consumer of Worlds in a brief battle, while their children already entered one of the first Skiffs. After all the rest of the Skiffs were successful on launching out of the realm, Thor enters the last craft, reassuring the survival of the Asgardian people, or so everyone thought. When the King and the Queen thought they were going to be reunited with his children once again, Galactus accurately threw a large chunk of earth at his ship, along with several others, when it was already flying outside the atmosphere, critically damaging the whole ship and causing for it to crash land back to the realm before exploding in the process. After witnessing their parents' apparent demise, Modi and Torunn could only cry in pain and despair.

Sadly enough, not all those onboard the ship survived the deadly crash, especially when Queen Sif herself was flushed out of the craft into the vacuum of space, when the ship collided with the debris Galactus had thrown, much to Thor's painful misery, seeing him lose his beloved before his very own eyes. In fact, only the God of Thunder himself was the only survivor of the latter, wherein his reawakening, saw nothing but chaos and destruction throughout Asgard, realizing that it was Galactus who prophesied Ragnarök, not Surtur, without even accepting the fact that his own son was involved in causing it in the first place. Thinking of Modi, he assured to himself that he would keep his ultimate promise to him in another way he could since the Strombreaker was unfortunately destroyed inside Odin's Vault caused by Galactus, before throwing the Mjolnir to the vacuum of space, ultimately enchanting the weapon so it would go straight to Modi, anointing him as the next King of Asgard after he perishes.

In the final moments of Ragnarök, a grieving and raging Thor had unexpectedly unleashed the fullest potential of his powers and clashed Galactus, one last time. In the end, the all-powerful King of Asgard finally uses all his might and strength, launching a series of powerful lightning bolts beneath the earth, reaching down deep to the core of the realm, causing the planet to finally explode and fulfilling the prophecies of Ragnarök at his own hands, killing both Thor and Galactus in the process.

Equipment: Seemingly those to Thor Odinson of Earth-61615.
Transportation:

Weapons: Seemingly those to Thor Odinson of Earth-61615.

Retrieved from "https://marvelcomicsfanon.fandom.com/wiki/Thor_Odinson_(Earth-61616)?oldid=215811"
Community content is available under CC-BY-SA unless otherwise noted.