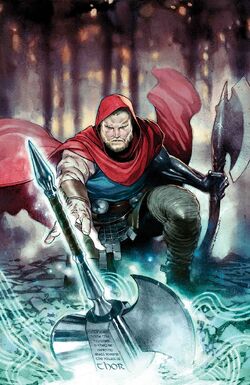 I am Thor Odinson of the Vikings, you big, fat giant... I am not the god of reason and understanding... I am the God of Thunder and Lightning!

Thor Odinson had an idyllic childhood, brought up in Asgard as the treasured son of Odin and his wife Frigga. Though Frigga was though to be his true, biological mother at first, Thor was actually revealed to be the blood-son of Odin, All-Father of the Asgardians, and Jord, who was also known as Gaea, the goddess who was one of the Elder Gods. Odin's wife, the goddess Frigga, acted as Thor's mother from that time onward. Not until many decades later did Thor learn that Jord was his birth mother.

His best friend and playmate was his adopted brother Loki, and though they were rivals for their father's throne, they still remained close companions. Loki was taught magic by their mother, while Thor was taught how to be a warrior by their father. Brought up in the warrior culture of the Asgardians, Thor valued strength, courage, and loyalty above all else. He desired to be exactly like his father, the war hero, and received the powerful hammer, the mighty Mjolnir.

Exiled on Earth and Defeating Loki

When his irresponsible behavior threatened his homeland, he was stripped of his power and banished by his father Odin to Earth. While exiled on Earth, Thor learned humility, found love in Jane Foster, and helped to save his new friends from a destructive threat sent by his jealous adoptive brother Loki. During his brief stay on Earth, Thor also had to pretend and cover himself up under the identity of Jane's ex-boyfriend, Donald Blake, before eventually revealing his true identity and origins to everyone else. In the process, Thor redeemed himself in the eyes of his father and was granted access to his power and worthiness to the Mjolnir once more.

The Avengers and the Chitauri Invasion

After being welcomed back to Asgard as a hero, Thor visited Earth to retrieve Loki after Loki began his attempt to take over the world, under the secret service to the Mad Titan, Thanos. He then joined the Avengers and fought with them against the Chitauri during the Battle of New York.

After he had returned to Asgard he helped the Asgardian armies restore peace to the Nine Realms. He fought against the Dark Elves during the Second Dark Elf Conflict, defeating and almost killing their leader, Malekith, in the process and ending the threat. During these events, he was reunited with Jane Foster after she became host to the Aether, the fluid vessel for the Reality Stone, and became a target of the Dark Elves. Eventually, the Aether was removed from her body and all the Dark Elves were defeated. Thor renounced his claim to the throne and left Asgard for Earth so he could stay with Foster back on Earth.

During his stay on Earth, Thor helped the Avengers once again, this time in their attempts to locate Loki's Scepter, leading to him joining the fight against Hydra. Following Hydra's defeat and the capture of Baron Wolfgang von Strucker, the team had to stop the rogue-turned Ultron, the once heroic-serving A.I. that was inadvertently created by his own ally and friend Hank Pym which now had threatened to wipe out all of humanity by creating a global extinction event and presumably replace it with his own Ultron Sentries.

Once Ultron had been defeated for the first time, Thor promised his Avenger allies that he would return and went back to Asgard to investigate the visions he saw when being manipulated by Scarlet Witch, which showed him the Infinity Stones. In his investigations, Thor realized that Loki still cheated death and started having another secret plan on his own, to which Thor was extremely suspicious about, distracting his Infinity Quest for a little while longer, before continuing his search for the Stones later on, but not after dealing with his return during the Global Superhuman War, when Loki resurfaced with the Movement Alliance.

A few weeks since the Ultron Offensive, the infamous Movement Alliance conducted a series of massive terrorist attacks all over the world destroying the Brooklyn Bridge, Golden Gate Bridge, Eiffel Tower, Taj Mahal, and even the Great Wall of China, killing over 1,500 people on the very first day. Consequently, all the Movement's opposing adversaries, the heroes (including Rhodey), were united into creating their own Ultimate Alliance, in order to stop and prevent the Movement from commencing its schemes upon world domination and unified evil sovereignty, before its too late. In response to the continuous attacks, Thor had no other choice but to delay his search for the Infinity Stones and help the heroes of Earth deal with the worsening situation.

During the growing threats of the invading Movement Alliance, Thor and the Reserves, a S.H.I.E.L.D.-based team of enhanced individuals, joined and helped the European Defense Initiative into fending off the continuous forces throughout the entirety of Europe against the forces of the Movement (which mostly included the godly forces of the Tricksters of Asgard, led by Loki himself, who washed up and caused different kinds of mischief and evil all over Europe) from ever entering the most-populated countries and cities of the continent, doing their very best to keep the cities safe by letting the wreak and havoc settle far away from the populated landscape, as far away as possible.

Asgardian/Elder God Hybrid Physiology: Odin, the All father of Asgard, said to Jord (Gaea the Earthmother of Midgard), "I seek an heir whose powers surpass Asgard." Biologically half-Asgardian on his father's side and half-Elder God on his mother's side; Thor possesses a number of superhuman attributes common among the Asgardian and other gods. However, due to his unique birth, some are considerably more developed than those of the vast majority of his race. Thor's skin, muscle, and bone tissues have several times the density of the same tissues in the body of a human being, contributing to his superhuman weight. He is invulnerable to powerful energy blasts, weighted impacts, falls from great heights, explosions and various other opposing forces. Even without his godly power, Thor is still physically the strongest and most durable of all the Asgardians.

Retrieved from "https://marvelcomicsfanon.fandom.com/wiki/Thor_Odinson_(Earth-61615)?oldid=234019"
Community content is available under CC-BY-SA unless otherwise noted.