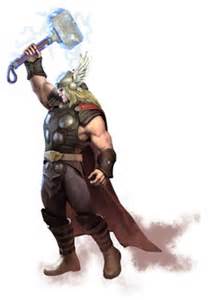 Little is detailed about Thor's life before the great battle against Dr. Doom, however it can be assumed to follow much of the same path as his mainstream counterpart shortly after the Decimation of the Earth's mutant population.

Heeding Nick Fury's distress call to defend the UNN Alpha from the attack of the Masters of Evil, Thor used his powers to bring Wolverine, Captain America and Spider-Man aboard the Helicarrier. Possibly, he brought also all other heroes who received Fury's call, though they seem to have been deployed to other parts of the carrier.

When the Civil War broke out, Thor chose to support the Superhuman Registration Act. However, soon the nanite network for the Thunderbolts gained sentience and started assimilating more of Earth's population. However the network was defeated.

The SRA was modified by Congress so that superhero identities will not be public knwoledge, and won't be forced into mandatory police services. Several months pass & the Wrecking Crew are tearing apart the NYC subway system. Thor, Iron Man, Captain America, and Spider-Man respond. They manage to defeat the supervillain team, but they also came across Skrulls along the way. The incapacitated Skrulls are then sent to be interrogated at the Raft.

The UA receives intelligence on a Maggia operation in downtown Manhatten The intel itself was gathered by symbiote superhero Toxin. However, unlike last time, Toxin has managed to escape and now a UA squad (Thor, Iron Man, Living Laser, Storm) is sent to help. Arriving to the Maggia op's location, the squad fights its way through the Maggia forces. Back up arrives in the form of a New York Police Department patrol lead by Stan Crater & Jean DeWolff. But the Maggia sends in Shockwave & Force are sent in. Fortune smiles when another Sinister Six member stumbles across the fiasco of gunfire, this one being Electro. The battle ends with UA confiscating several of the crates of weapons being loaded onto trucks, the Maggia escape with the rest. What's inside is the twist, the crates contained the weapons in the S.H.I.E.L.D. transports a few weeks back; meaning, of course, the Maggia have been infiltrated by the Skrulls as well (Shockwave & Force were also Skrulls).

Retrieved from "https://marvelcomicsfanon.fandom.com/wiki/Thor_Odinson_(Earth-6109.2)?oldid=199885"
Community content is available under CC-BY-SA unless otherwise noted.