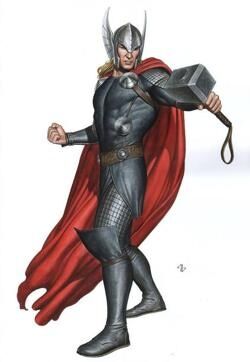 Thor was born to Frigga and Odin in Asgard, Thor and his younger Brother Loki were trained by Odin at hunting and archery. When Thor was 16 he was rewarded Mjölnir as a Coming of Age gift. Thor and Loki went to the home of the Frost Giants and killed some of them but were caught by Odin and banished for threatening to begin war.

On Earth, Loki and Thor bonded as Brother until Loki was captured by S.H.I.E.L.D

Thor is known to possess amazing godly powers and abilities that allow him to do many things that simply can't be done by others.

Equipment: None known.
Transportation: None known.
Weapons: Mjölnir: Although Thor possesses a knowledge of swords, spears, bows and other weapons; his most famous weapon of them all is his mighty hammer named Mjölnir. The hammer is known to channel Thor's atmokinetic powers and he mostly channels lightinig towards his enemies as a long range weapon. The hammer is also known to level mountains with one strike and capable of emitting shockwaves powerful than any earthquake. The hammer is known to only be wielded by Thor and any other person it deems worthy of it's power.