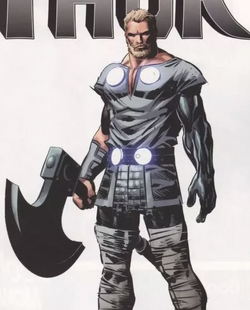 The Thunderer, Prince of Asgard, God of Thunder
Identity

I would extinguish a thousand suns for you... my Empress.

Thor is the first born son of King Odin and Queen Freyja of Asgard. All his life he was groomed to be Asgard's greatest warrior and heir to the throne. However, as he matured he began to grow tired of war. His passion for protecting the Nine Realms grew, which eventually led to him joining the team of Earth heroes called the Avengers.

For almost a decade Thor maintained a balanced career as an Avenger and the Prince of Asgard. However, when the Order of the World Tree launched their attack on Midgard, Thor was one of the first heroes to be defeated. His arm was sliced off by Ares, and his soul was transferred to Niffleheim, where it remained in Hela's custody for the remainder of the war. His body, however, had been taken by Skurge the Executioner, who ferried Thor through the Bifrost to be reunited with Asgard, which was now burning.

Following the subjugation of Earth, Hela allowed Thor's soul to be bartered away to Amora, who sought a replacement for Skurge following his death. Bound by dark magic, Thor's entire existence was rewritten to turn him into Amora's obedient servant, and passionate lover.

Retrieved from "https://marvelcomicsfanon.fandom.com/wiki/Thor_Odinson_(Earth-2001)?oldid=261560"
Community content is available under CC-BY-SA unless otherwise noted.