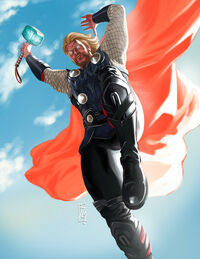 Thor was born in Asgard and was the younger sibling of Loki. Thor received Mjolnir from his father when he turned 160, as it was considered a coming of age for an Asgardian. Thor was eventually arrogant with Mjolnir, leading him and Loki to secretly go out in the night to fight Frost Giants. Odin eventually discovered Thor and Loki's double life and banished them as punishment due to the threat of war.

After a few months of living on Earth, the two brothers had bonded and learned a new value of life. Odin, seeing the boys had learned their lesson, allowed them back into Asgard and relieved them of their punishment. After being granted his powers back, Thor had fallen in love with a woman named Jane Foster and also saw the outlaws on Earth and wanted to make it a better place and so he left Asgard to protect Earth alongside its other heroes.

After a few months on Earth, Thor was contacted by Heimdall and told that Loki had assumed the throne of Asgard and is becoming a Tyrant and needed to be stopped. Thor and Heimdall travelled to Asgard and discovered it has been turned into a ice wasteland and was overrun by Frost Giants. Thor and Heimdall battled the Frost Giants and went to the throne room to discover Odin had been imprisoned, Thor asks why Loki would do this. Loki then explains of his Frost Giant heritage and proceeds to attack Thor. Thor and Loki battle while Heimdall releases Odin from his imprisonment. Thor defeated Loki, Loki swore revenge and teleported away. It took a few weeks to restore Asgard to its former glory but they got there in the end. Odin thanked Thor for helping him and admitted it was most likely time for Thor to be king, but Thor declined stating Midguard needed him more and left.

One day while on patrol, Thor discovered a large green monster rampaging through Manhattan and went to stop it immediately. The two battled and eventually Iron Man arrived, the two still struggled to fight the monster now dubbed "Hulk" and eventually Captain America and two others arrived. The group combined their strengths and defeated the Hulk, the Hulk reverted to a human form and the group discovered it was the scientist known as Bruce Banner.

Odin, the Allfather of Asgard, said to Jord (Gaea the Earthmother of Midgard), "I seek an heir whose powers surpass Asgard."

Besides being the strongest man in creation, and durable enough to withstand a blast from Celestials, Thor also has energy manipulation powers that are on par with the Silver Surfer. He is also armed with Mjolnir, the mystical warhammer that has been shown to be capable of opening passageways through space and time, blocking all sorts of energy blasts, and bending the elements to its master’s will. Thor has been shown to be able to swing Mjolnir at twice the speed of light (and this was never claimed to the fastest that Thor could swing it either). Thor is an Asgardian warrior god, trained and skilled in the arts of battle, and he’s been doing it for countless ages. While Thor has usually been shown to rely solely on his fighting ability, super strength, and well nigh invulnerability, he has so many other options available to him if a fight starts going badly. He has complete mastery over the weather, he can open chasms in the earth, he can drain the life-force out of his opponent's body, and if worst comes to worst, use the dreaded God-blast, an attack that is so powerful that one time Mjolnir shattered from the amount of power Thor channeled. Thor has even broken through the armor of the Celestial Exitar in one blow; the force of it created a shock wave which rocked the planet Pangoria to its foundations, and was about to destroy it entirely if Thor hadn't acted. While on Earth, Thor greatly withholds his power unless fighting someone with similar strength and durability. When facing both the Avengers and the Fantastic Four the Hulk has even stated that Thor with Mjolnir is the only one among them that he considers a threat.

Asgardian/Elder God Hybrid Physiology: Biologically half-Asgardian on his father's side and half-Elder God on his mother's side; Thor possesses a number of superhuman attributes common among the Asgardian and other gods. However, due to his unique birth, some are considerably more developed than those of the vast majority of his race. Thor's skin, muscle, and bone tissues have several times the density of the same tissues in the body of a human being, contributing to his superhuman weight. He is invulnerable to powerful energy blasts, weighted impacts, falls from great heights, explosions and various other opposing forces. Even without his godly power Thor is still physically the strongest and most durable of all the Asgardians.

Life-Force: also known as the God-Force. The godly energies that fuel all of Thor's godlike powers. Thor's immortal life-force is more powerful than the mystical properties of Mjolnir. Thor's Life-force is so strong that the Destroyer using all of its powers could not destroy it. His Life-force allows him to be the most powerful being on the planet and one of the most powerful beings in the universe. Unlike many other deities, Thor's unique Life-force allows him to have full access to all of his powers regardless of what realm he enters. The only being so far that has been shown to affect Thor's God-force is Odin or Odin's raven in the form of Marnot. Thor's God-force is also the key to him using the God-blast.

Despite the fact that he always restrains his nigh-infinite strength in fights against mortals, he has proven capable of several acts of vast physical strength, including stalemating an enraged Hulk in battle for hours without tiring at all (despite the fact that the Hulk was constantly increasing in strength every moment) and knocking out a non-enraged Hulk, knocking out Namor with a single blow (despite Namor being fully hydrated and it was raining), defeating Bi-Beast (whose strength is said to equal the Hulk's), overpowering the Red Hulk, nearly rendering the Juggernaut unconscious (after negating his mystical defenses), and defeating both the Thing and an enraged Hulk at once in unarmed combat with only one arm, and one eye.

Memory Alteration: Thor calls this the 'Gift of Forgetfulness'. He took away Jane Foster's memories of her being kidnapped by Loki and a reporter's experience in Asgard.

All-Tongue: When Thor speaks with the All-Tongue anyone who hears him will hear him speak their native language in their hearts.

Retrieved from "https://marvelcomicsfanon.fandom.com/wiki/Thor_Odinson_(Earth-1315)?oldid=163711"
Community content is available under CC-BY-SA unless otherwise noted.