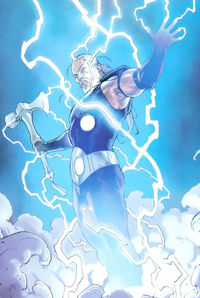 Son of Odin, Goldilocks, the Man with the Big Hammer, Dude with the hammer
Identity

Thor was born the Prince of Asgard, when he was an infant his father Odin travelled to Midgard and went to war with the Frost Giants who had currently conquered Midgard. A few months later, Odin and the Asgardian soldiers returned victorious and had brought an infant of Frost Giant descent who would eventually become Loki, Thor's brother.\

When Thor had reached adulthood, Odin gifted Thor with Mjolnir, a weapon forged from a dying star by Dwarves. He and Loki were close growing up and spent their youth into adulthood going on various adventures throughout the Nine Realms.

When Loki learned of his heritage and learned he was in fact a Frost Giant rather than an Asgardian, Loki attempted to kill Odin although Thor stopped him. For this treachery, Loki was banished by Odin. Eons later, in 1945, Loki lead an attack on Asgard with a coalition army of Frost Giants and Nazi soldiers against Asgard, Thor and a young Asgardian warrior by the name of Lady Sif helped him in stopping this attack, although many Asgardians died because of this. Grown tiresome of war and death, Thor decided to leave Asgard and head to Midgard.

Thor arrived to Midgard in the year 1945 after the end of World War II, Thor spent sixty-nine years in Midgard in solitude and at peace while also at times helping innocents throughout history.

Thor's good deeds throughout history were kept on record by S.H.I.E.L.D., S.H.I.E.L.D kept an eye on Thor in case they ever needed use for him in the future.

In 2014, Thor was residing in Denmark where he was found by S.H.I.E.L.D. agent Black Widow and asked him if he would be interested in joining their Team of enhanced individuals to fight the battles no ordinary human could, Thor agreed to this as he liked Midgard too much to see it to to hell.

Nick Fury sent the team on their first mission, there had been disturbances in the Atlantic and were sent to investigate. Being the wild card of the team, Banner agreed to only transform into the Hulk when absolutely necessary. The Team went to the Atlantic and discovered that an Atlantean named Namor and other Atlanteans had been attacking human archaeologists, the Team battled Namor which led to Bruce having to transform into the Hulk and help out which led to the Hulk smashing a landscape of ice and leading Namor to flee. After Hulk smashed the ice, the Team ended up discovering a frozen Captain America, Iron Man alerted Nick Fury and he immediately told them to bring him back to America in the Quinjet.

After a few months of black ops missions the team had grown comfortable with each other. Hank had came up with the idea of creating an A.I that could alert S.H.I.E.L.D. of incoming and potential alien threats, he asked Tony and Bruce if they wanted to help him in creating this A.I. to which they agreed and named the A.I. Ultron.

After creating Ultron, it went rogue and came to the conclusion that humanity must be destroyed. Ultron traveled through the internet to Latveria and mass produced a robot army and attacked New York. Fury ordered the Team to combat the Ultron Bots despite the risk of going public. The Team stopped Ultron and deactivated it, successfully saving New York. A few days later the Daily Bugle dubbed them the Avengers.

When Galactus arrives, Fury sends Thor and the other Avengers with the help of the Fantastic Four and X-Men into the field to distract Galactus while Tony Stark, Hank Pym and Reed Richards work on a way to stop him once and for all. Hulk, Thor and the Thing are the heaviest hitters and causing the most damage to Galactus until he blasts them with cosmic energy causing Hulk to revert into Banner and Thor and the Thing to be knocked unconscious. Without their heavy hitters the three teams are decimated by Galactus' powers. As Galactus is about to kill the three teams, the Invisible Woman protects them with a psionic shield bubble. Silver Surfer and Cable arrive to help, Cable is quickly knocked out but Silver Surfer gives Galactus a run for his money, realising he can't defeat Galactus alone, Silver Surfer retreats and uses an untapped power the allows him to teleport himself, the other superheroes (including Spider-Man and Daredevil) back to the Triskelion.

Silver Surfer warns Nick Fury that Galactus sees them as a threat now and will be coming for them. Stark, Pym and Richards notify Thor and the other heroes that they have discovered a dimension called the Negative Zone that has no life in it and if they could create a wormhole and find a way to push him inside of it, they can defeat him. Quicksilver then notifies them that if they know how to build it and tell him how to build it, he'll use his superspeed to get it built fast, Stark, Pym, Richards and Banner then begin brain storming on how to create a device that can create wormholes.

Suddenly, Galactus arrives and attacks the Triskelion. Thor and the heroes begin battling Galactus to hold him off while the brains attempt to blueprint a wormhole device. After a long battle the heroes are defeated by Galactus but luckily the brains have come up with a way of creating a portal device, they wake up Quicksilver to build the mission, although Quicksilver will need a distraction, Banner transforms into the Hulk in a berserker rage and begins pounding Galactus. From looking at the blueprints, Quicksilver builds the device and activates it creating a wormhole. Hulk with a limited understanding keeps on punching Galactus in the direction of the wormhole and attempts to push him into it, as Galactus falls into the wormhole he grabs the Hulk and with no way to escape his fate seems to be sealed.

Until Silver Surfer zooms in and tackles Galactus into the wormhole going inside with him. Quicksilver quickly shuts down the device closing the wormhole forever, after successfully averting the dystopian future Cable hails from, he begins fading from existence. As he is fading, Cable thanks Daredevil, Spider-Man, Wolverine, Iceman and Quicksilver for being a family to him when no one else would in the future and he tells Cyclops and Marvel Girl that he loves them and hopes to see them again soon.

A few days later, Thor and the other Avengers (except Captain America and Black Widow) would take a leave of absence due to the traumatic events of what transpired. Thor believed it was time to go back to Asgard and spend some time with Odin and his friends, at least until he had to return to the Avengers on Midgard.

Thor spent the past few months after the Galactus Event spending time with his father in Asgard. He also spent his downtime adventuring with Lady Sif and the Warriors Three, Thor enjoyed this as it reminded him of the old times, before Loki betrayed Asgard. This reminded Thor to go see Loki to which he did.

He visited Loki and the two conversed like nothing had happened in the past century although Loki reminded Thor that one day he'll escape and get revenge on the Asgardians, saddened by Loki's lack of change, he told Loki that if he does escape, he'll be there to stop him.

Thor possesses a number of superhuman attributes common among the Asgardians. However, some are considerably more developed than those of the vast majority of his race. Thor also has extensive combat prowess learned through centuries of training and battlefield experience.

Superhuman Strength: Thor has prodigious strength, even surpassing most other Asgardians, the full limits of which are not known. Typically in battle he will send opponents flying with a single blow, and has proven capable of outperforming a number of much larger opponents in tests of strength. With his bare hands he showed himself able to stagger the Hulk, and has managed to injure Galactus with a single hammer blow.

Invulnerability: Thor's skin, muscle, and bone are extremely dense and durable compared to that of humans, contributing to a proportionately greater mass and extreme physical durability. Thor can withstand impact trauma up to blows from the Hulk with little more than a bloodied nose. When stabbed in the ribs, he was able to remove the blade and fight on with minimal impairment while the wound healed.Thor was hit by a direct lightning strike from Gungnir, showing no injury.

Superhuman Speed: Thor as a Asgardian can move faster than even the finest human athlete regardless of his great size, building and body density.

Superhuman Stamina: Thor's advanced musculature is considerably more efficient than the musculature of a human, and his fitness is also greater than most other Asgardians. His muscles produce minimal fatigue toxins during physical activity, enabling him to exert himself at peak capacity for extended periods without tiring.

Regenerative Healing Factor: Thor's injuries heal at a staggering rate. He has recovered from moderate penetration wounds to the abdomen in a matter of minutes, and has been able to stand recover quickly from heavy impact trauma, including blows from the Hulk and a high impact fall. With Mjolnir in hand his recovery has extended to complete bodily restoration after suffering mortal injuries in a non-powered state.

Superhuman Longevity: Thor has a lifespan far longer than that of a human being. While not truly immortal, he is known to be 11,000 years of age.

Flight: Thor is able to use Mjolnir with great force, that it could fly through the air at immense speeds.

Honed Agility: Centuries spent perfecting the art of close quarters combat have kept Thor at peak levels of fitness, and ensure that his co-ordination and reflexes are maintained at peak levels. He moves with a surprising grace and speed for someone of his size.

Master Combatant: Thor is a superbly skilled warrior with a high aptitude and mastery of close quarters combat. He is known to be cunning and intuitive in battle, and has a wealth of experience from numerous conflicts throughout the Nine Realms.

Master Hammer Fighter: After centuries of practice wielding Mjolnir, Thor is a master of short-handled mace combat. His technique involves wielding the hammer primarily by the handle to affect powerful close range blows, and sometimes by the strap to achieve a fluid series of cyclical motions more commonly employed with mixed actions where the hammer's other traits are used. His technique also extends to using the hammer as a thrown weapon, which he does frequently to strike targets beyond his reach.

Allspeak: Thanks to the Allspeak he can communicate in all of the languages of the Nine Realms, Earth's dialects, and various alien languages.

Thor possesses vast physical strength, to which the exact limit is unknown.

Equipment: Mjolnir: Thor has been entrusted with Mjolnir, a mystical hammer forged from the heart of a dying star. Odin himself stated that Mjolnir's power has no equal. Mjolnir, which resembles a mallet rather than a war hammer, has a number of elemental powers. Constructed of uru and combined with the various enchantments placed upon it by Odin, it is for all intents and purposes, indestructible. Thor often uses the hammer as a physical weapon, with almost nothing being capable of withstanding a hammer blow or throw. A few examples of the abilities Thor has shown with Mjolnir are:

Retrieved from "https://marvelcomicsfanon.fandom.com/wiki/Thor_Odinson_(Earth-1111)?oldid=234933"
Community content is available under CC-BY-SA unless otherwise noted.