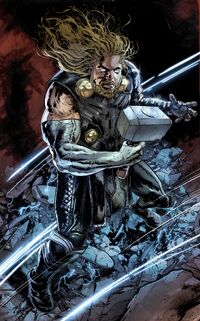 Single
Occupation
Former prince of Asgard; Prince of Svartalfheim
Education
Svartalfheim and Asgard's best teachers
Origin
Origin
Son of Malekith, the Dark Elves' king, Thor was raised by him along with his brother, Algrim, to become their father's warriors. During a fight, Odin found the boy with an amnesia and raised him as his own until Thor realized who he really was and planned to attack Asgard
Place of Birth
Malekith's Fortress, Svartalfheim
Creators

"I could have seen myself. But instead I saw every version of myself in this horrifying "Multiverse"."

-- -Thor, Upon learning of his Law-Breaker powers

Thor was born in Malekith's fortress in Svartalfheim and was raised along with his younger brother, Algrim, that weakness had no place in the battlefield and that now they are the heirs for the crown of Svartalfheim, but that they are worthy to become the kings of all of the nine realms.

During a fight with Asgard, Thor was knocked out and hit his head, making him forget who he was. Odin, the king of Asgard, found the boy on the ground and adopted him.

After many years, Thor met with his brother, now turned into Kurse(Secretly by their father, but this is unknown to the two and they believe Odin is responsible) found out who he really was and was out to kill every Asgardian for what they have done to his Brother.

Eventually though he was exiled from Asgard.

Hammer of the Nature Orb

Thor eventually picked up the Hammer of the Nature Orb and was worthy enough to wield its massive power.

He remembered who he was before the nine realms were rebooted but lost his memories of this new world, and gained massive powers over nature, most notably lightning and thunder storms.

He was defeated by the Defenders who assembled.

They sent him to S.H.I.E.L.D.'s custody, where he was eventually kidnapped by HYDRA and used for the Psuedo-Svartalfheimian Program as a genetic template.

To be added when the time is right.

Besides his enormous physical strength, and being durable enough to survive an attack by the Law-Breakers, Thor also has energy manipulation powers that are on par with the Silver Surfer.

He is also armed with Mjolnir, the hammer that's channeling the Orb of Nature's powers into a form less deadly to the user, yet still allowing him to control Nature.

Thor is trained and skilled in both Svartalfheimian and Asgardian fighting styles.

While Thor has usually been shown to rely solely on his fighting ability, super strength, and nigh invulnerability, he has many other options available to him if a fight starts going badly.

He has complete mastery over the weather, he can open chasms in the Earth and if worst comes to worst, use his Law-Breakers' secret heritage.

Indomitable Will: Thor has shown to have a powerful force of will, so much so that he has defied the will of his father Odin, who is his king and is bound to serve him, on several occasions if he feels the need to do so. He does not back down from any foe, does not give into a fight and is willing to lay down his own life in defense of others.

Knowledge of Magic: A natural ability as he is a Dark Elf.

Multilingual: Thor knows and speaks all of the languages of the Nine Realms, Earth's dialects, and various alien languages.

Skilled Tactician: Malekith tought him everything he could about tactics in order to defeat the other nine realms and Svartalfheim if they go against him.

Leadership: Thor was meant to be the general of the Dark Elves, and is gifted with leadership.

Gifted Intellect: Thor was taught by the greatest minds in Asgard and Svartalfheim.

Uncontrollable Shapeshifting: Thor is slowly shapeshifting into metal or another unknown substance. It is unknown how this has happened.

Retrieved from "https://marvelcomicsfanon.fandom.com/wiki/Thor_Malekithson_(Earth-11425)?oldid=77623"
Community content is available under CC-BY-SA unless otherwise noted.