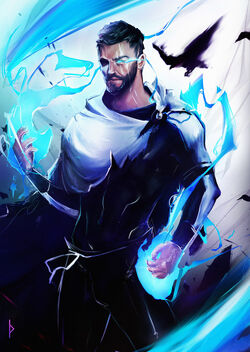 I'm not a God. No matter how much you want me to be.

Thor Bjornberg was born in the town of Vanersborg, Sweden. His birth was difficult, and ended up killing his mother. He was raised by his loving father, Wilhelm, who moved the two of them to Tonsberg, Norway when Thor was little. Wilhelm was a very caring and loving father, but despite all that, Thor grew up to be a deeply troubled man. Always feeling out of place, he fell into alcoholism near the end of High School, and fell out of contact with his father. One day, he ended up getting in a drunk driving accident that claimed the life of a young mother, leaving her child orphaned. Horrified, Thor fled the scene and immigrated into America with nothing to his name. He was quickly found by Potts International, who offered him a chance to change everything. Thor was naive, and didn't quite know everything that entailed, so he accepted the offer.

He was then put through the process of Terrigenesis, and emerged crackling with lightning. He was crafted the identity of Thunderstrike, and renamed "Thor Odinson", to sell the story of him being the Norse God Thor, come to Earth to save humanity. This made him one of the most popular, yet controversial members of the Squadron Supreme.

Thor would eventually come back into contact with his father, who became incredibly disappointed in him for pretending to be a God. This rejection only led Thunderstrike deeper into his alcoholism, resulting in him becoming quite the handful for his boss, Juniper Potts, and his commander, Captain America.

Retrieved from "https://marvelcomicsfanon.fandom.com/wiki/Thor_Bjornberg_(Earth-1515)?oldid=244646"
Community content is available under CC-BY-SA unless otherwise noted.