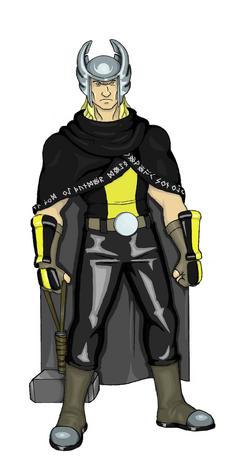 By the power of Mjolnir, and the blessing of the mighty gods of the Pantheon of Asgard, I, Thor, Son of Odin, shall accept to join your mighty team, as long as I follow the example of the greatest warrior I've ever fought alongside, the mighty Steve Rogers.

Thor is the worldwide known God of Thunder of the Scandinavian Legends, worshiped amongst the mortal vikings, which was the thing Thor enjoyed the most, but his arrogance and snobbish attitude was becoming an upset amongst his fellow Asgardians, including his father Odin, who wanted to have his son to become a true warrior who defends the realm of Asgard and protect its people so he decided to embark his son to a test to prove if he's worthy of carrying on to the throne of Asgard, to which Thor readily accepts

Odin imposed a challenge to his son Thor, that he commands Asgard's most powerful battleship, the Einherjar, towards Midgard to confront the Ice Giants unleashed by Ice Lord Laufey but the conditions were that not a single Midgardian be harmed and that he must ensure his crew respects him. The challenge went rough at the start, where Thor kept harassing his crew members with constant pressure to accomplish the goal, fueled by his ambitions of becoming King of Asgard, however, he suddenly headed into a major snowstorm, forcing his crew to head towards Midgard. Once they hit land, however, it turns out the storm was caused by Laufey, but he was being mind controlled by an even higher force. When Thor confronted and almost killed him, he broke the trance and saw Laufey's fear in his eyes when he said that "Another one was going to assault him". Thor realized that this was a trick made by an Asgardian but the shock came when it turned out to be his own brother

Loki, Thor's younger brother managed to control Laufey in order to trick Odin into sending Thor, who he considered a major threat in his plans to take over the throne of Asgard. Thor was hesitant to fight his own brother but Loki was determined to defeat him, so he launched a powerful blast that sent Thor right to the ice cold ocean where he accidentally got separated from his enchanted mace Mjolnir and kept him frozen in ice in the years to come

A thousand years after the battle, Thor's body was found by agents from the European Unified Council, an elite European organization (considered as Europe's answer to S.H.I.E.L.D.) and successfully unfrozen, surprised to find him still alive, thanks to his godlike metabolism, however, once he wakes up, he assaults the team, until he comes to his senses when the shock of modern times hits him. The Council catches him up to date and asks him to cooperate for a special project, which requires a sample from his blood to develop their own version of a cancelled American project called "Super Soldier", but Thor refused to comply and even threatened them to another assault if he doesn't receive his freedom. The Council accepts, but dares him to find a way to adapt to the modern world by himself. Unbeknownst to everyone, someone else found out about Thor's emergence

Two sides of good and evil found out about Thor. One was S.H.I.E.L.D., thanks to a few contacts Phil Coulson has inside and told Steve Rogers about him. Meanwhile, a E.U.C. spy revealed the intel to his master, a criminal underlord called Ikol, a modern day reincarnation of Loki who now wants to finish what his ancestor started, since even though he got rid of Thor, he failed to conquer Asgard. Thor wandered in the streets of Tonsberg, Norway for days, visiting pubs and interacting with the people, wondering how come they're not worshiping him like before. During a visit to a museum, he discovers that the Gods became nothing but a myth

Once he set out to discover how that happened, he was surrounded by a gang of Ice Giants led by Ikol, who introduced himself to Thor as "his worst nightmare come true". Thor stated to fight the giants, but he found it difficult after being outnumbered. Ikol even reveals to Thor that the reason why the Asgardians are a myth were because his predecessor caused the Ragnarok after failing to usurp the Throne. Thor managed to defeat a few of the giants, but the numbers were too high, that was until Captain America arrived in the nick of time to assist the God of Thunder and managed to defeat the group, however, Thor didn't let Steve speak, screaming at him for his interference, claiming that he had it under control, even though that was a lie.

After that battle, he went out to reflect on his fate in a modern world, until he met a little boy called Ole, who is a fan of Asgardian mythology and was happy to finally meet a God. Thor somehow got happy that someone recognized him and later the boy invited him to his house, where Thor met Ole's mother Jeanna, a half-Norwegian, half-British resident who works as a doctor for the village. Thor got to know their lives and how they love the Asgardian Mythology, but he also learned to appreciate the little things in life that other take for granted, making him start to realize the error of his attitude

Three days after living with the Fosters, they were suddenly attacked by a swarm of Ice Giants who were attacking the village looking for Thor. He managed to fight against the Ice Giants alone again, until Rogers once again emerged to assist. Thor still was adamant of relying on Steve's help, but after seeing him helping the other civilians escape during the battle, made him see his worthiness. Thor and Steve still had a hard time until Coulson arrived with a special weapon they found days earlier. Once they drop it, Thor smiles and jumps towards it and once he takes it, a major thunderstorm unleashes destroying most of the Ice Giants, revealing it to be Thor's greatest weapon: Mjolnir. Turns out, Odin placed a special spell on the Mace that Thor would reach his full power if he was worthy enough of being a true warrior who cares about people. Now with his full godlike power, Thor defeats the ice Giants and issues a warning to Ikol that if he ever dares to mess with Midgard again, he will feel the full wrath of the God of Thunder.

Thor congratulates Steve and thanks him for his help, which Steve replies likewise and later proposes Thor to join the Avengers, which he accepts on the condition that S.H.I.E.L.D. helps Jeanna and Ole. The E.U.C. interferes telling them that she cannot leave the country due to her dual citizenship, but Coulson replies that the entire paperwork has been done, so Jeanna can relocate with her son to America and assist S.H.I.E.L.D. as Chief of Medical Staff, but allowed the E.U.C. to keep an eye on the Avengers since he knows that they're working on a similar project and is willing to accept cooperation.

Asgardian/Elder God Hybrid Physiology: Biologically being Godlike, Thor possesses a number of superhuman attributes common among the Asgardian and other gods. However, due to his unique birth, some are considerably more developed than those of the vast majority of his race. Thor's skin, muscle, and bone tissues have several times the density of the same tissues in the body of a human being, contributing to his superhuman weight. He is invulnerable to powerful energy blasts, weighted impacts, falls from great heights, explosions and various other opposing forces. Even without his godly power Thor is still physically the strongest and most durable of all the Asgardians.

Superhuman Strength: In addition to being the God of Thunder, Thor is also the Asgardian God of Strength, as such he is physically the strongest of the Asgardian gods and one of the most powerful beings in the Universe. Thor is also capable of entering into a state of Berserker Rage known as Warrior's Madness, which will temporarily increase his strength and stamina tenfold but will only do so in desperate situations because it threatens his sanity. He always restrains and holds back his infinite strength against mortals to avoid inflicting major damage

Godlike Invulnerability: Being a god whose heritage is half-Asgardian & half-Elder God affords Thor absolute invulnerability and immunity to such human ailments as diseases, toxins, poisons, corrosives, fire, electrocution, asphyxiation, lead, and radiation poisoning. Thor can drink mead all day long and not get drunk.

Superhuman Speed: Thor can move at extreme speeds. Thor can fly to the sun in a matter of minutes and also swing Mjolnir at TWICE the speed of light with his powers reduced in half.

Superhuman Stamina: Thor's advanced musculature is considerably more efficient than that of a human and most other Asgardians. His muscles produce no fatigue toxins during physical activity compared to those of humans and most other members of his race. His virtually inexhaustible stamina enables him to hold his breath for an undefined period of time and exert himself at peak capacity for months without tiring at all.

Superhuman Senses: Thor's superhuman sense's allow him to effortlessly see objects as far out as the edge of the Solar System, allow him to track objects traveling faster than light, and hears cries from the other side of the planet.

Super Breath: Thor can use his breath to create hurricane force winds.

Self Sustenance: He is capable of surviving in the vacuum of space unaided and does not need air, food, water, or sleep.

Regenerative Healing Factor: Despite his astounding resistance to injury, it is possible to injure Thor. In the rare instances that he is injured, his body is capable of repairing damaged tissue with much greater speed and efficiency than the body of a human being and all other Asgardians.

Superhuman Longevity: Thor, like all other Asgardians, isn't immortal in the same sense of some other god pantheons. Thor ages at a pace far, far slower than a human being as he is countless eons old; mortals' life spans are comparable to nothing more than a blink of his immortal eyes.

Indomitable Will: Thor has shown to have a powerful force of will, so much so that he has defied the will of his father Odin, who is his king and is bound to serve him, on several occasions if he feels the need to do so. He does not back down from any foe, does not give into a fight and is willing to lay down his own life in defense of others.

Mind Resistance: Thor has the ability to resist the mental influence of powerful beings.

Master Tactician: For over countless millenia, he has lead Asgard into battle against overwhelming forces with great leadership and employing strategies and tactics.

Leadership: Thor serves as the as the first choice to defend Asgard from it's enemies. He has earned the trust of his fellow Asgardians to follow him into battle.

Retrieved from "https://marvelcomicsfanon.fandom.com/wiki/Thor_(Earth-120986)?oldid=199883"
Community content is available under CC-BY-SA unless otherwise noted.