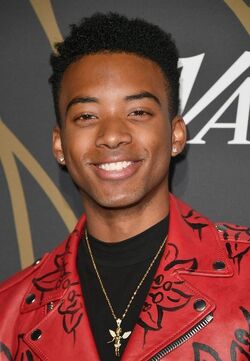 You know what happens to an octopus who gets struck by lightning? The same thing happens to everything else.

Tommy Orlando Wilson was born in San Diego, California to Darlene and Jefferson Wilson. He is the youngest of four children, one of his older siblings being Sam Wilson who would eventually become Falcon in the later years. Tommy was known as the mischievous of the family, loving to get on his siblings nerves and isn't afraid to check anyone whenever things get out of hand. Tommy is shown to be very spoiled when he was a child, but he was rightfully disciplined, learning about respect, boundaries, and responsibility.

Once Tommy reached his teen years, the Wilson family moved to New York City where they stayed in the diverse neighborhood of Forest Hills and when he hit high school, he met his best friends Justina Escavado and Dutch Hoffman, not to mention his first love, Celia Powers.

In his senior year of high school, Tommy was on a tour at Empire State University as part of the college tours and suddenly, the university was attacked by the Sinister Six of H.Y.D.R.A. led by Doctor Octopus where he was attacked by the ruthless villain before the Avengers showed up. As Tommy was held against a wall by Octopus, Tommy's eyes began to turn white and lightning bolts began surging around his body. Soon, a large bolt of lightning shot down from the sky and struck Octopus, knocking him backwards and freeing Tommy from his grip. The other villains saw what had happened and lunged at Tommy, but the youngest Wilson shoots lightning bolts out of his hands, electrocuting them non-fatally. This left Tommy shocked from what had happened and after the students were left off early, he quickly ran up to his mother's job where she is a scientist and tells her what had happened. Once he showed her his newly formed powers, Darlene was left in complete shock and she quickly examined him. Once the results came out, she revealed to Tommy that he had the X-Gene that had the abilities develop at a late stage, in other words-- he is a mutant.

After the reveal of his origin, Tommy was still reeling the fact that he had powers, not wondering what he could be either amazed or scared for he knew about the mutants and how they were ostracized by the outside the world like how the X-Men were. He began to talk to Justina and Dutch about it and even showed them his powers. They soon remind him that he had told them about Sam joining the Avengers and how much he wanted to be a hero. Tommy started to think about and he knew that he looked up to Sam as well as the Avengers and he always wanted to protect people. After practicing and experimenting with his new abilities, Tommy is given a suit designed by Justina and names himself Thunderbird, a name derived from a Native American mythological bird that creates storms -- mainly thunder and lightning. Like Spider-Man, Tommy made his debut as a vigilante, stopping everyday criminals that bring trouble to New York right before facing some superpowered villains such as Mysterio as well as Doctor Octopus.

His budding career soon caught the attention of the Avengers as well as the X-Men and soon Tommy would occasionally team up with them to fight the greater supervillains such as Magneto and even Thanos.

After his breakup with Celia who moves away to Australia with her parents, Tommy was brought to Asgard with the Avengers to help guide Thor's father Odin in battling an unknown enemy threatening to destroy the kingdom. During his visit, Tommy meets Loki Laufeyson, the God of Mischief and the adoptive brother of Thor. While Tommy thought of Loki as immature at first, Loki fell head over heels for Tommy and after the fight, Loki would sneak out of Asgard to accompany Tommy. Tommy distanced himself from the Asgardian due to his coping with the breakup with Celia and when Loki was told this by Sam, he began to take his feelings seriously and Tommy began to open up to Loki, starting off as friends. Soon, Tommy began to grow feelings for Loki as well and the two became lovers, thus Odin declaring Tommy as Loki's betrothed -- in other words: Tommy is now Loki's fiancé.

Equipment: His Thunderbird suit
Transportation: None
Weapons: No Weapons

Retrieved from "https://marvelcomicsfanon.fandom.com/wiki/Thomas_Wilson_(Earth-7090)?oldid=273562"
Community content is available under CC-BY-SA unless otherwise noted.