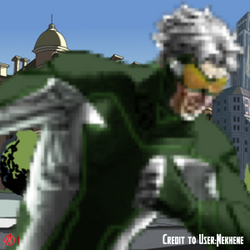 Thomas "Tommy" Shepherd was born and raised in Springfield, New Jersey. He is only son of Frank and Mary Shepherd, who divorced when he was still young. Tommy was in and out of juvenile halls for most of his life. It was in one of the detention centres that Tommy first met Lisa. The two seemed to have had some kind of romantic or physical relationship during this time.

Because Tommy "accidentally" vaporized his high school using his powers, he was imprisoned under court order in a high-powered facility equipped with advanced offensive and defensive technology such as robotic suits and power dampening containment cells. Before the Young Avengers freed him, Tommy had been locked up for months, and was being tested and experimented on with the goal to make him into a living weapon.

In order to find the reincarnated sons of the Scarlet Witch and himself, the Vision recommended using the Young Avengers Program

The team was able to locate him in a high security detention facility for superpowered juvenile offenders. They release him from his cell, and Stature almost immediately noted that Tommy and Billy could be twins. The breakout did not go unnoticed, and as the team ran into the armed officers of the facility. Tommy cynically and cruelly began attacking the officers and fleeing doctors, but was stopped by Kate Bishop and Patriot.

Tommy officially joined the team and adopted the codename "Speed".

Speed is a mutant with an enhanced physiology design for supersonic speed, including:

Despite possessing some level of superhuman durability, things such as bullets and energy blasts can injure him the same way they injure a regular person.