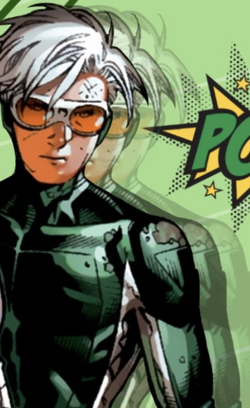 When the Scarlet Witch suffered from a mental breakdown and created her own pocket dimension, she mystically manifested her own twin sons, Tommy and Billy. However, after intervention from Doctor Strange and the Avengers, Wanda came to realize they were not real and restored reality.

However, Tommy had been reborn into the real world as the first son of Jack and Melinda Shepherd. Jack was a police officer and Melinda was a nurse. Their jobs kept them busy, leaving little time to care for their only child.

Tommy eventually turned to petty crime simply to entertain himself and force attention from his parents. But his father was just disappointed. Things got more complicated when Tommy's super speed manifested.

He simply believed he was a mutant, but didn't tell anybody, and instead just used his speed to get away with more and more crimes. Eventually, his father caught up with him and turned him in, where he was tried as an adult and imprisoned in a secret facility designed to hold underage metahumans. Tommy was eventually freed by a group called the Young Avengers, and he discovered that one of them, Wiccan, looked exactly like him.

Tommy was curious, and went with the Young Avengers after they made their escape. He and Billy felt an instant connection to each other, and went on to discover they were the reincarnations of Scarlet Witch's sons. Tommy realized that while Billy was more of a manifestation of their mother, he was much more similar to their mother's twin brother, Quicksilver, and named himself Speed.

Retrieved from "https://marvelcomicsfanon.fandom.com/wiki/Thomas_Shepherd_(Earth-101)?oldid=250009"
Community content is available under CC-BY-SA unless otherwise noted.