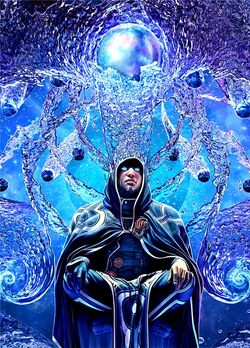 As you are the light that illuminates this earth... I will be the darkness that consumes it, for I am this planet's very Black Sun...

Thomas Joseph Lightner was a mad scientist, formerly known for running his ancestors' scientific research organization which was the dismantled Lightner Laboratories, consistently desperate for harnessing the undiscovered and unknown particles (dark matter, dark energy, anti-matter), who successfully constructed a weaponized device capable of harnessing the power of more than a thousand stars and galaxies within the great cosmos.

The device he built using his former company's particle accelerator, would eventually be known as the "Skycannon." Thomas even tried to introduce the newly-invented weapon to the local military, only for his proposition to be rejected by the representatives of United States Government, deeming that his invention was too unethical and too dangerous to be used by anyone.

The Skycannon's energy mutated Thomas and gave him the "power" of a black hole. In the immediate aftermath of his unexpected transformation, Thomas has been feeling the natural urge to consume every single heavy-charged particle that he started sensing around him, according to his newly-gained "cosmic sense."

As a panicked response to Thomas' worsening condition on causing chaos and destruction throughout Atomic City, the United States Government had no other choice but to call for an outside help since their forces couldn't deal with the growing threat, leading them to contact the beloved heroic team known as the Squadron Supreme. The Squadron couldn't immediately stop him during their confrontation due of his vast astral cosmic powers.

In an act of a desperation to prevent Lightner's devastating unstable powers from destroying Atomic City, and possibly even the Earth itself, Hyperion flew Lightner out of the planet towards the depths of space. As the main energy of the Sun was finally being absorbed into his body, the process (that causes the Sun to turn gradually turn dark since the star's light being slowly absorbed) accidentally releases a large of solar flare heading directly to Earth, Hyperion could only stare in horror since he couldn't do anything else but be pressured to choose between the decision of stopping a powerful Thomas and preventing the solar flare from destroying the entire planet's atmosphere.

Hyperion seemingly chose the latter option, much to Lightner's delight for leaving his destructive goal completely undisturbed, although he actually returned to the same place almost the speed of light, landing a fatal blow to take down the cosmically-empowered Lightner, finally ending his cosmic threatening assault on the Earth and the rest of the Solar System.

Hyperion's last second strategy was proven to be miraculously successful, seeing Lightner suddenly vanish into the cosmic oblivion, consequently saving the fate of their reality from Lightner's cosmic clutches. Unbeknownst to everyone else within his native reality, Lightner didn't perish at all. In reality, Hyperion's strike had unexpectedly tear the fabric of reality, transporting Thomas across the known multiverse, finding himself in an unknown reality, revealing to be in fact, the prime universe.

Seemingly catatonic at first, Thomas slowly closes his eyes, ultimately feeling the cosmic hunger worsening his condition, as he conveniently senses and sees a nearby supergiant star in an unknown system located in the edge of the Andromeda galaxy. Using the ability of flight, he goes into the great core of the star itself, wherein he subsequently absorbs the latter without hesitation and considering the fact that his actions had forced most of the system's benevolent planets into destruction and extinction due to Thomas consuming the entire star. After this, he immediately felt more power and energy inside of him than he could have ever imagined, to which he simply smirked, proclaiming that he would be craving for more. With his hunger empowering his weakened state, he then sense the neighboring galaxy next to Andromeda, the Milky Way.

After receiving a distress call from H.A.M.M.E.R. after one of its satellites' detecting a strange and menacing presence approaching the Earth's orbit, Norman Osborn led the Dark Avengers on their first ever cosmic-related and first serious mission, to save the Earth and the Solar System itself from a legion of cosmic constructs created and led by Mysterium. While the Dark Avengers appeared to immediately win the battle after Sentry shredded Mysterium's body into pieces when they first arrived, he was temporarily depowered as Mysterium returned with more power on his system.

As more and more of the Avengers fell, Osborn reluctantly asked the only associate he could trust, the Man-Thing, to have him and his Avengers give them access to the Nexus of All Realities, but at the cost of having their minds eventually wiped by Man-Thing himself after dealing with Mysterium. In the chaotic finality, Norman, Sentry, and Moonstone were able to travel across the Nexus of All Realities and defeated Mysterium in countless realities wherein Lightner's powers began to diminish. Thanks to the combined might of Sentry (possessed by the more powerful Void) and Moonstone, they were able to weaken Lightner into his human state, whom the latter was mercilessly killed by Osborn out of rage using the Destroyer Armor Prototype Gun, seeing Mysterium's existence as a major factor in almost destroying his public reputation on Earth and fearing that sparing him might cause the exposure of his true motives.

Despite leaving a brief historical mark on his home reality, Lightner's actions as Mysterium has actually put a massive and significant scar on Atomic City, the last battleground he had stood on Earth against the heroic Squadron Supreme. Mostly blamed for the tragedy by the biased media and conflicted public, the Squadron were heavily stricken with guilt, with some of them even would eventually experience major cases of depression, due to massive loss of civilian lives in the well-beloved city, forcing themselves to disband, going their separate ways to deal with the heartbreaking grief and the acceptance of the fact that they've failed to instill hope and trust to the people across the world, one last time.

For the first time in a decade of the Squadron Supreme's journey, Mysterium was the only powerful force among the Squadron's rogues gallery effective enough to break the heroes' undying oath to protect the Earth no matter the cost, despite not having to know it after being accidentally thrown by Hyperion across the multiverse. However, the long-term effects of Mysterium's infamous legacy would soon come to an end after the next four and a half years and it occurred when a far more threatening cosmic entity had made its way onto Earth after the latter had sensed a powerful energy source on the blue planet, a threat so enormous and so unstoppable that it has subsequently destined for the reformation of the Squadron Supreme in order to prevent the entity from consuming the Earth and the their universe altogether.

Powers from the Dark Forces

After the death of Mysterium on the prime reality, it was later revealed that his still glowing corpse was confiscated by the agents of S.H.I.E.L.D. and taken to the H.A.M.M.E.R. Headquarters in New York City, the Triskelion. Despite having their mind wipes as a part of the Man-Thing's agreement, Norman was able to restore his recent memories thanks to his Iron Patriot suit being upgraded with a systematic resistance against psionic attacks, blasphemously breaking his contract with the cosmic creature without the latter's awareness. Only two and a half months after the battle on the Nexus, H.A.M.M.E.R. scientists successfully stabilize the energy within his corpse and subsequently convert it with the rest of the energy in the process. A weapon which could shoot energy blasts similar to those of the energy that Mysterium emits was soon made, albeit it was still a prototype. Still unsatisfied by this achievement, Norman ordered his top scientists to convert the already impressive gun instead into a miniature particle accelerator which could grant anyone who uses it countless powers, though not as much powerful as Mysterium had previously harnessed.

The scientists did what they were ordered, only for the latter themselves to end up getting coldly executed at the hands of Norman's guards, since Norman wanted the credit and access to the machine all by himself and keep its existence classified as possible. Later on, Mysterium's stored essence was eventually used by Osborn and the Dark Avengers, using it to imbued themselves with godly powers as they planned their assault on Asgard, in an attempt to restore their might and power on the realm of gods, since they were finally exposed by the Ultimates on Earth.

Unique Cosmic Physiology: As the primordial Black Sun, he could absorb all heat and light, and possessed a powerful gravity well, much like a black hole. As the Nth Man, he served as a living space warp, "a sentient singularity, drawing matter and energy into the nigh-infinite dimensions" of his own form. He could absorb all forms of matter and energy, growing larger and more powerful as he did so. There was no limit to this, and he would continue to enlarge until he absorbed an entire universe, at which point he would break through the dimensional barriers into another universe, and start the process all over again. However, Mysterium's powers would begin to decrease depending where reality he is in besides Earth-61712, his home universe.