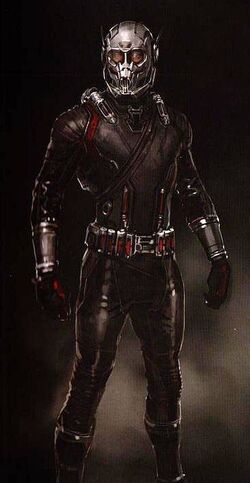 I'm doing this for a reason, you know, for him... I'm doing something, not even these costumed clowns could have done, since they're all busy fighting each other like lousy, pathetic little kids...

Thomas "Tom" Foster was the nephew of Bill Foster. Just like his late uncle, he had a brilliant mind and was qualified into attending M.I.T. (Massachusetts Institute of Technology) out of his passion and persistence to follow his footsteps, although the slight difference was that he decided to become a forensic scientist, something that his parents had once been encouraging him to pursue since his father had the same career and occupation before he died heroically during the tragic events of the Oklahoma City bombings in the late 1990s, the day he was also supposed to be proposing to his mother. What was even unfortunate for Tom, was the fact that he never got the chance to be raised, meet his father in person, or even know that he was dedicating most of his works and accomplishments for him and his mother just as well until present day. Despite this tragedy, Tom's uncle Bill still willingly served somewhat as the closest father figure could ever have throughout his still growing life.

All Hope is Lost

While his uncle Bill currently being imprisoned for helping the Secret Avengers by the last second, Bill had no regrets for any of it whatsoever, now that the anti-Registration Group were successful into influencing the pro-Registration Act into signing a mutual peaceful treaty after having able to finally defeating and apprehending the true mastermind of the Great Superhuman Civil War, which was revealed to be Helmut Zemo, ending the conflict and eventually, the Superhuman Registration Act, after the events of the Secret Invasion, once and for all. In the midst of chaos, the young Tom and his mother endlessly participated in a series of rants and protests which supported the idea to abolish the Superhuman Registration Act from becoming a permanent law throughout the entire globe since the law itself had already gotten Bill in jeopardy, all because he did what was right and just for the greater good.

As the heroic representatives of the registration act, with Tony Stark being one of them, came to sorrowfully informed Tom and the activists that they believed the act would most certainly work if they would just comply with the accords and even subsequently threatened the latter that they'll be reluctantly sent into prison if they kept on protesting, Tom's mother had her hopes on freeing her own brother get slowly diminished, while Tom's view himself towards the heroic went darker as time goes by, taking the strong and somewhat delusional conviction into his heart that he and his loved ones could no longer trust nor rely on them since the days of the registration act has been officially implemented by the very authorities he also seemed to have trusted once.

While Tom was still a current student at M.I.T. just like his uncle did, he informed the Black Panther and Everett Ross and asked them for a secretive assistance in using enough and right specific scientific tools and equipment, that he intended to follow in his uncle's footsteps by cracking the Pym Particle formula and becoming a hero in order to revive the mantle of becoming the Goliath himself. Agreeing with Tom's righteous and selfless decision and motivation, the Black Panther and Ross promised to help him achieve his goal, to which he was able to fully help and support him in Tom's training and improvement into finally becoming the all-new Goliath of New York City, and possibly even beyond the city that never sleeps.

Upon hearing this in his long-term sentence to imprisonment, Bill couldn't be more proud and honored to what his nephew had eventually become, keeping the flame of his heroic legacy burning as he could, while Tom and his allies would still find more ways to get his uncle and others who were also imprisoned for nobly joining the anti-registration forces out of prison and break the registration act as soon as possible and restore peace and freedom once more to the heroic community, in his own unpredictable and most likely extreme terms, which was unbeknownst to his own mother and uncle. As the shrinking and growing Goliath, Tom became a ruthless but still a merciful at the same time in when it comes to his methods in dealing with criminals and rogue superhumans, believing that they still have the chance to abandon their selfish and chaotic ways and start life anew, but not without his way of literally beating some sense into his adversaries as he confronts them.

Size Manipulation: Due to his infusion with Pym Particles after deciphering the formula, Goliath possesses the ability to increase his size, to a maximum safe limit of approximately 25 feet in height. Persons infused with the particles who are able to increase their sizes do so by means of acquirement of mass from an unknown, presumably extra-dimensional, source and expand their own molecular structures at the same time; as they are so expanding their molecular structures, they add this mass to them. Almost the same as his uncle's superhuman achievement, Tom himself generally attained a stature of 15 feet for the majority of his crime-fighting activities. At 15 feet, which is 2.5 times his normal height of 6 feet, Foster's weight increased by a factor of 15.625, the cube of the factor of 2.5, from his normal weight of 200 pounds to a weight at 15 feet of 3125 pounds.

Retrieved from "https://marvelcomicsfanon.fandom.com/wiki/Thomas_Foster_(Earth-61615)?oldid=254578"
Community content is available under CC-BY-SA unless otherwise noted.