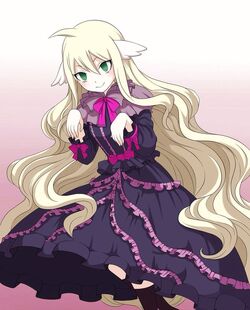 -- Delos to the Doctor

After being badly wounded by the Black Widow in the reality of Earth-616. He was teleported back to the Citadel with the Healing Dankebot Units doing everything to heal him, however it was too late as he started to glow golden of Regeneration Energy, and soon morphed into a rather small girl child with blonde hair and green eyes. At first, the Operator was confused, then changed to that of regret. Regretting what she has done. To make up for those mistakes, she orders all Operation's Units to return to the Citadel so they can depart Earth-616, and enter the reality of Earth-160 during the Magic Era where would stay on a island. She would then stay at a Magic Guild with "two parents parents" she created she was able to join the guild.

Mavis world work for the Atomic Vatican magic guild where she would clean the guild's floor, clothing, dishes, and other things the guild members wouldn't do. But when the two parents required money, and borrowed from the guild. They treated her much more harshly, but not much as the parents did pay some of the debt in a fortnight. However, one day the parents died by S-Class wizards during a quest. Due to this, the guild then treated her much more harshly to do work to pay off the debt. Despite always been mistreated, and pushed around, she was happy. Because she's not alone like she always was on the Citadel. And hopes she could last before returning.

Retrieved from "https://marvelcomicsfanon.fandom.com/wiki/Third_Operator?oldid=179533"
Community content is available under CC-BY-SA unless otherwise noted.