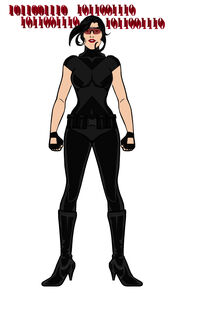 Sage is skilled in the martial arts, and is a formidable hand-to-hand combatant thanks to her having complete conscious control over her own body. Sage is also self-taught in a wide range of firearms, which she can use with considerable skill and accuracy. She is also exceedingly smart. Her computer mind makes it easy for her to learn new talents.

She has no inherent "weakness".

Retrieved from "https://marvelcomicsfanon.fandom.com/wiki/Theresa_Saglam_(Earth-515)?oldid=171336"
Community content is available under CC-BY-SA unless otherwise noted.