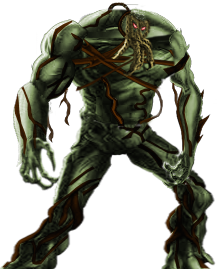 No Hair, (though hair-like green strands of vegetable matter cover much of his body)
Skin
Green
Unusual Features
Man-Thing is made of plant matter that simulates a humanoid form.
Status
Citizenship

First appearance
Creatures of the Night

Allegedly, before Earth was formed, a creator being from before time spawned the Fallen Stars, each an embodiment of one of its thoughts. On Earth, the creator made a woman, Cleito, representing the nature of reality. Cleito spawned Adam K'ad-Mon, the first Man of Lineage, and their birth site became the Nexus of Reality. Descendants of K'ad-Mon served as Nexus guardians, but over time the Men of Lineage became less concerned with this mission until eventually one man abandoned it completely: Ted Sallis.

Dr. Ted Sallis, a biochemistry professor at Empire State University, the sheltered Sallis had no knowledge of his destiny and preferred books to people. The United States Army recruited him into "Project Sulfur," which sought a means to survive bio-chemical warfare. Sallis developed "Serum SO-2," which granted immunity to all known toxic biochemicals, but its mutagenic effects would have transformed people into monsters.

Ted's friend, the free-spirited girl Sainte-Cloud, convinced him to denounce the Project, shutting it down before any serum was produced. Ted proposed to Sainte-Cloud, but she refused due to their many differences.

Returning to teaching, Sallis fell in love with one of his students, Ellen Brandt, a naïve and impassioned girl of nineteen. The two eloped following a secret affair. After their honeymoon, they visited the fortune teller Madame Swabada, who foretold a catastrophic change. Sallis was then reassigned to "Project Gladiator," a S.H.I.E.L.D. research program based in the Florida Everglades and aimed at re-creating the lost Super Soldier Serum that had created Captain America.

Working separately from his colleagues, including Dr. Wilma Calvin and Dr. Barbara Morse, Sallis modified his SO-2 formula as the basis for a new Super-Soldier Serum. The subversive organization AIM wanted the serum and conspired with a bitter Ellen, whom Ted had neglected since their honeymoon.

Upon completing his new serum, Ted committed its formula to memory and burnt his records. When Ellen led Ted into an AIM ambush, he fled and injected the only existing sample of the serum into himself just before his car crashed into the swamp. He should have died, but the magical energies of the swamp combined with the serum to transform him into the hideous creature later known as the Man-Thing. His intelligence rapidly fading, he slew the AIM agents and horribly burned half of Ellen's face. Unknown to Sallis, Ellen had been pregnant.

Recovered by Project Gladiator agents, she underwent surgery that repaired her face, but it proved temporary. After giving birth, she gave her son up for adoption and began punishing herself for her crimes by surrendering to alcohol, drugs, carnal indulgence and eventually joined Aldrich Killian's Extremis project.

After wandering through the swamp for a time he stumbled onto the Writer's Mansion and Man-Thing and Sallis appeared to be separated and Sallis was looked after by the family that lived there. However, this turned out to be an illusion conjured by The Writer]] who was using Sallis to finish his book by bringing the characers to life.

AIM again tried to obtain Sallis' formula, but was foiled by the Man-Thing and Ka-Zar. Man-Thing made the swamps his home and became the guardian of the Nexus of All Realities. Its magic made the swamps a focal point of bizarre activity, attracting super-beings such as Wundarr, who thought Man-Thing was his mother, and the Molecule Man.

The Man-Thing in some sense befriended Richard Rory, Ezekiel Tork and his pet Dawg, and fought Franklin Armstrong Schist and Professor Slaughter; the religious zealot Foolkiller; the Critics, afterlife agents seeking to judge the fate of suicide victim and clown Darrel Daniel; the natives of La Hacienda, home of the Fountain of Youth, whose waters nearly cured the Man-Thing and horribly mutated Schist before his death; the Glob, Yagzan, and the Cult of Entropy and the Si-Fan, as well as many other adventures with some Avengers, Dr. Strange, Howard the Duck and Ghost Rider, among others.

Man-Thing was handpicked by Blade to join S.H.I.E.L.D.'s Howling Commandos.

Ted Sallis was a noted biochemist. His new form also allows him to speak X'Zelzi'Ohr, a language that anyone can understand as if it were their native tongue.

Able to lift at least 2000 pounds but has fought foes as powerful as the Hulk so at times his strength may be able to increase past this.

Equipment: None.
Transportation: Tends to wander using own feet.
Weapons: Uses claws to slash at opponents or uses acid secretions triggered by fear.