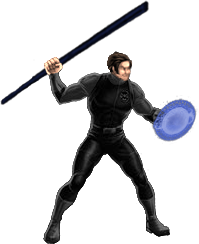 Earth-0503
Base Of Operations
Manhattan SHIELD Base, occasionally The Playground
Characteristics
Gender

Bobbi, Hunter my brother is the reason behind the energy wave.

Born and Raised on Afterlife for 18 years, Theodore Johnson was raised by his mother Jiaying and fellow Inhumans. Living on Afterlife for most of his life he formed bonds with the Inhuman members of the Young Alliance and Lincoln Campbell. He was unaware that Daisy was his sister until she was brought to Afterlife by Gordon, which is when his mother introduced him to Daisy when he was 17.

When the Inhumans were going to war with SHIELD, Jiaying made Gordon take Theo to an apartment that was being rented for him in Manhattan which is where he stayed after he found out his mother had died for the wrong cause. Daisy contacted him after the storm on SHIELD by the Inhumans to ensure he was safe and told him about his mother’s death.

Unaffected by his mother’s death Theo lived just under a year in Manhattan until his skills with technology were noted by the ATCU, at which point was HYDRA, and he was recruited into the ATCU on the same day Bobbi and Lance went to find out what they were doing with the Inhumans at the base.

After being forced to take the contaminated fish oil pill Theo was thrown into Terrigenesis, as he emerged his magical powers were revealed as he lost control which took out the ATCU agents that were with him at the time. After Daisy found out Theo was in there she informed Bobbi and Lance who went to where the disturbance was coming from.

Still unable to control his powers, Lance Hunter used the best option and shot an Icer round into Theo’s leg making Theo’s powers stop as Theo falls unconscious. Waking up in the inhuman adapted room at the Playground, Daisy informed Theo that he will be trained by Doctor Strange at the Sanctum Sanctorum.

Once his training was completed a few months later, Theo was enlisted in SHIELD and made the leader of a new team called the Young Alliance.

Retrieved from "https://marvelcomicsfanon.fandom.com/wiki/Theodore_Johnson_(Earth-0503)?oldid=138709"
Community content is available under CC-BY-SA unless otherwise noted.