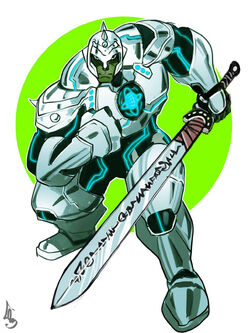 People signify me as some great unifier. Truth is? I'm simply me. Just a humble guy with a not so humble upbringing looking to angle peoples, all peoples of all cultures closer together.

Prince Dorrek VIII was born to the Kree Hero and galactic protector known as Captain Mar-Vell. Who, while on his many travels across the stars, met and fell in love with the Skrull principality belonging to the house of Dorrek; Princess Anelle. The two grew close for a time and eventually entered a passionate relationship which would begat the heir to a unified coalition brought about by their union. During the fateful Infinity Gauntlet, Anelle was one of many casualties when the Mad Titan's sycophantic outbursts with the Infinity Gauntlet led to the destruction of Tarnax IV. With the royal line cut down in it's infancy, the Skrull Empire was doomed to crumble and fall.

But the seed born of both races legacy from their union would live on in the form of a young child. One who is of both and neither cultures whom would come of age while on Earth.

Techorg Augmented Kree/Skrull Hybrid Physiology: Due to a very colorful gene pool derived from his familial background. Being the offspring of a decorated, vastly augmented war hero and empirical royalty with noble blood carrying the latent X-Gene. Theodore possesses vast power potential greater than all of the Captain Marvel's who proceeded him thus far. On top of having his natural abilities born of both races, King Dorrek has undergone extensive Technical and Biological upgrades throughout his career as a superhero and a leader of a vast interstellar front.

Equipment:
Kree Battle Uniform: A specially made battle armor crafted for the liegelord of the Kree-Skrull empire by his friend, young avenger teammate and all around trusted military commander Noh-Varr. Normally held in resverve within his superior iteration Nega Bands. Theo's suit was designed using technological implements comprising of multiple cultures gleaned across the multiverse, Noh's reality included, Theodore's high-tech exomantel operates much like a klyntar does both in semblance and abilities. While incorporating the advanced biotechnology of the Kree and the science mysticism of the Skrull's to make it's wielder all the more powerful as well as imposing.

Transportation: Flight under his own power.
The Supreme: His personalized reality hopping warp ship, crafted from the Symbiont Mod's of his kree warwear and powered by a Bifrost Bridge fragment fused to an M'Kraan Crystal shard taken from the Tallus of the Exiles and a Cosmic Egg Shell obtained over Captain Marvel's many travels. Supreme is a sentient barge that can adjust it's interior or exterior according to Theodore's wishes, from extrapolating mechanics of Noh-Varr's Pocket Battle Field onto his powered armor nodes. Dorrek VIII can utilize the physics bending properties of which for Spatial Modulation Zoning, making the interior bigger on the inside than on the out. As well as Chronal Dilation Bubbles which can accelerate, slow or even decouple sections of the ship from the regular passage of time. Systematically run by the Empirical Xenophage Transitional Reality Exploratory Manifest Interactive Transport Argonaut System; otherwise known as E.X.T.R.E.M.I.T.A.S; a subsidiary of the of the We-Plex Intelligence operating software of King Marvel's exo-suit.

Weapons:
Star Sword Excelsior: The sacred sword belonging to the first founder of the Knights of the Infinite. A magical blade comprising from two infamous war heroes belonging to the once warring galactic super powers. The mighty sword of Dorrek Supreme boasts powerful quantum magic in it's own right. It's edge further modified with Kree technology enabling it to channel and harness cosmic, quantum and totallic force from across realities and back in order to strengthen it's users might and natural powers.

Nega Bands: Having received a pair of Nega Bands from the Plex Extreme Intelligence from Noh-Varr's native home reality as a gift. Theodore now has access to the virtually limitless level of ergo-tech at the fingertips of the alien Kree society. Combining the engineering of various sciences belonging to Kree, Skrull and Shi'ar among other bits of racial ingenuity. King Hulks new & improved Nega-Bands have been outfitted with vast cosmological ornamentation born of various godly entities as well. Elements which went into their creation include rare jewelry from the Lifestone Tree, mineral shavings cut from a piece of Celestial Tech known as the Mandalay Gem with the amorphous crystal metallic substance the bracers themselves are made of being sliced with Primagen. The very Prima-Meteria used by the Proginator's to create the Inhuman Race.