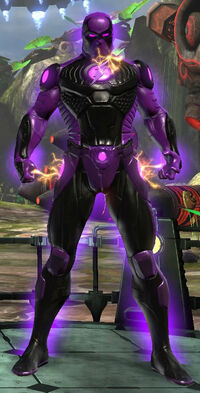 Theo "Nightrous" Thompson is a mutant from Cleveland, Ohio, who went on to become a full member of the X-Men, and a founding member of the Shadow Warriors, with Malcolm Durbridge, and Riley O'Rourke.

Speed Energy Connection: After his X-gene kicked in Theo was able to gain a connection to the Speed Energy.

Theo possesses slightly superhuman strength in his upper body. His lower body is much stronger, as part of his body's adaptations for running. With his upper body he can lift (press) approximately 1000 pounds. He can leg press approximately one ton under optimal conditions

Theo can die just like any other normal Human.

Retrieved from "https://marvelcomicsfanon.fandom.com/wiki/Theo_Thompson_(Earth-2210)?oldid=231687"
Community content is available under CC-BY-SA unless otherwise noted.