"The Wolverine" is the eighteenth episode of Assemble!'s Season Two and the fourtieth episode overall.

-Hulk... Smash... Puny God!!! - Hulk punched recklessly around, still enraged from the battle in Asgard, where Loki teleported him away to an unknown location. In one of the absent minded, enraged punches he punched a mysterious man in brown-and-tan.

-You just didn't do that, bub. - The man gave the Gamma monster a killer look, extending his claws.

-Hulk smash cat-dude! - Hulk said, punching Wolverine away. The green giant jumped next to Wolverine and punched his face against the ground.

From a safe distance, Viper got a gun out of her belt and shot a tranquilizer gun at both Hulk and Wolverine, stunning them. Hulk turned into Banner immediately, making it easy for the woman to drag them to her base.

After imprisoning Banner in a cell where the Hulk's strength could not break through, she went to give Logan a visit.

-Hello, Logan. - Viper smiled, running a hand through her hair.

-Who the h*ll are you? - Wolverine spat, looking up at the green haired woman.

-Ophelia Sarkissian... Nice to meet you. -

-Same place you last remember yourself in. Japan. - Sarkissian smiled at the man.

Viper walked to him, sitting on his waist and stroking his face.

When Logan woke up again, he was hanging against a wall without his outfit. The chains were made of pure adamantium.

-I heard you, Lo-Lo! - Someone said in the darkness.

-Who's there? - Logan extended his claws to no use.

-Don't you remember your old teammate? - Deadpool showed up. -And watch your vocabulary, it's not allowed to say that kind of stuff in front of our viewers. -

-Now I wish she would have killed me. - James whispered.

-Then what would we be supposed to do this whole episode? I mean, it's called after you!!! -

-Hey! Vocabulary! And well, just to keep this chapter going. This is all for the fans! - Deadpool said, opening Logan's cuffs with a key.

-This is curious, you know? Just one chapter ago you were in New York and now you're in Japan! - Deadpool shook his head. -The magic of cameo characters. They can be anywhere... I wish I could teleport like that too... Hey, I would like being a cameo sometime! -

-I'm getting outta here. - Logan said, getting dressed and walking out of his cell.

-Shhhh, don't shout or Viper will wake up. - Wilson whispered.

-Before we continue we need to save Doctor Banner. It's in the script. -

-That green guy is actually a doctor. If he gets angry he goes green. If you did that, you'd be green all day. - Deadpool chuckled softly.

Deadpool got a katana out and cut Dr. Banner's cell lock, freeing him.

Logan looked at Banner and then at Wilson.

-Were you serious, Wilson? Is this the green guy? -

-I'm Bruce Banner, and sorry for everything that happened before getting locked here. - Banner held his hand at Logan for him to shake it.

-This is called tension! - Deadpool exclaimed.

-Shut the f**k up, you'll wake the green haired gal up. - Wolverine ordered.

-If we wake her up I got my gun. - Wade said, taking his gun out, which was sliced by Logan's claws.

-If we face her, you can talk to her till death, but let's try not to commit collective suicide. - James looked at Deadpool.

-I would just get angry and attack you all. - Banner said, scratching his head.

-Did you hear that, Wilson? - Logan asked.

-But I'm better than you! I can beat the Hulk! - Deadpool shouted, but when Wolverine tried to shut him up it was too late. Viper was already standing in front of them.

-Too late. Okay, new plan. We will use all of us in here. - Logan looked at Deadpool and Doctor Banner. -Wilson, just annoy the f**k out of Banner until he's green. Banner, when you are angry enough, just destroy your way out. I'll handle the gal. -

-He would rather call it smash... Ya know... Instead of destroy... - Deadpool corrected Wolverine.

Once Banner was Hulked up thanks to Deadpool...

-Hey! Hey hey hey! You just cut off my whole dialogue! What kind of trickery is this?! You don't include me in the card title, that's a huge letdown, and I'll try to get myself in. But at least let me talk as much as I want. Don't you want your story to be successful? Just leave it all to me! Like iCarly's song but better. And sang by me. - Deadpool complained, before being punched out of the base by Hulk.

Logan and Hulk followed Wade out of the base, where an Avengers Quinjet was waiting for Hulk, before taking it back to Avengers Mansion.

-If you are wondering why is there a Quinjet here it's because the prison guard Stan has contacts between the Avengers, so it's not out of nowhere. If you want to know what will happen to Wolvie and I in the next chapters, just keep on watching. I am aiming for a card title, and I will get it, even if I have to destroy this whole reality. But we won't appear again till Season 3, at least not officially. Bad bad marketing. Anywho, just stay tuned until I appear again. Because I'm better than the best there is. So I'm the best. Ciao!!! - 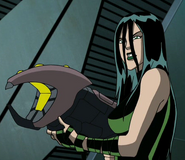 "Yes, yes me! Everyone's favorite Marvel character! The Merc with a Mouth! Deadpool!!!"

Retrieved from "https://marvelcomicsfanon.fandom.com/wiki/The_Wolverine_(A!)?oldid=55752"
Community content is available under CC-BY-SA unless otherwise noted.