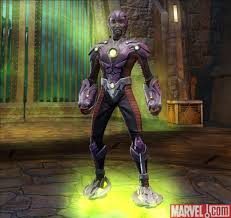 Little is known about the Wizard's life before the Secret War. It can be assumed to be similar to his mainstream counterpart.

Wizard was one of the supervillains who tech was supplied by the Tinkerer, who was provided funding from Latverian Prime Minister Lucia von Bardas. He was stationed at the gates at Castle Doom with Scorcher, with his gauntlets redesigned to open said gates as a failsafe. He later participated in the Latverian siege on New York along with Scorcher, the Shocker, and Diamondback.

His powers are derived from the weapons and inventions incorporated into his battle-suit. The suit is slightly armored and can generate a force-field of considerable strength.

He is a genius-level inventor specializing in physics, sub-atomic particles and other dimensions.

Retrieved from "https://marvelcomicsfanon.fandom.com/wiki/The_Wizard_(Earth-6109.2)?oldid=160665"
Community content is available under CC-BY-SA unless otherwise noted.