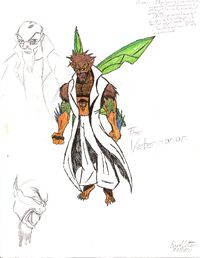 The Vet, the Mad Vet, the Animal Man
Identity

Former leader and creator of the Animal Men, frequent partnership with the Poacher; former member of the Anti-Animal Society
Relatives
None known
Universe

Bradley A. Dotson
First appearance
The Zoologist, King of the Animals #5

A former professor and teacher of both the Zoologist's and the Botanist's alter egos (Dr. Alan Douglas and Prof. Phineas P. Pines, respectfully), Dr. Alexander von Zolos turned to a life of attempting world domination after learning of his former pupil Alan's transformation into the Zoologist. Obsessed with creating an army of animal men from the Zoologist's DNA. After creating and losing his first clone, which would become the PsuedoZoologist, he continued his attempts to perfect the process and soon created six perfect specimens, whom he called his Animal Men. Later transformed into an Animal Man himself by the Botanist in a bid to coerce him into joining the Botanist's Anti-Animal Alliance. However, he rejected him after learning of his plans to destroy all animalkind. Sided with the Zoologist's Pack and subsequently sacrificed himself for the good of all life. Former member of the Botanist's Anti-Animal Alliance. Also creator of the PsuedoZoologist and the Animal Men, and former benefactor of the Poacher and his Trophy Hunters.

Born towards the end of the 19th Century, Alexander von Zolos dreamed of being free. The son of a former physics professor driven insane and an alcoholic mother, Alexander did not have a lovely childhood. Enraptured in his love for the biological sciences, he quickly excelled in his studies and soon left his home in Europe to travel to America in order to study in some of the finest academies America had to offer. Many years later, he was offered a teaching position at Yale University, where he taught the biological sciences, specializing in veterinary sciences.

During the course of his entire career, Dr. Zolos found no greater bond between himself and his students than during the 1930s when he taught freshmen Alan Douglas, Allison Dawson, and Phineas Pines. Extremely fond of all three, especially young Alan, he was overwhelmed by the love he possessed towards animals, reminding the doctor of himself as a young man. After the three graduated, he offered all three full-time jobs as his teaching and lab assistants. However, that all changed after the fateful trip that seemingly "killed" all three students, leaving the good doctor bitter and alone.

Slowly losing interest in teaching over the next few decades, losing interest in life in fact, Dr. Zolos constantly contemplated on the thought of suicide, having seemingly lost the only people who ever truly mattered to him. But, things changed in an entirely different direction when Dr. Zolos learned of an "Animal Man" who seemingly possessed the power of the entire animal kingdom at his disposal. His thoughts soon became obsessed with the idea of a man who could become any animal, use the power of the entire animal kingdom at will, control the very beasts that roamed the Earth, and Dr. Zolos soon became wrapped around the idea of creating an army of animal men, and over the next several years, began building laboratories and testing labs all across the jungles and forests of the world in a bid to learn everything he could. It was sometime around this era that Dr. Zolos shunned his name, now calling himself simply the Veterinarian.

When he learned of poacher Ryan McCatcher's encounter with the Animal Man many years before, Dr. Zolos made a plan to concoct a serum which would restore his vitality and grant him superhuman senses in exchange for loyal servitude. Eagerly accepting after being given the serum, Ryan McCatcher renamed himself the Poacher and soon set out to capture the "Animal Man". However, the Veterinarian was soon shocked by several things when he utilized a special device that could let him see whatever the Poacher was seeing. First, he was shocked by the Animal Man's power. Second, he was shocked that their was an "Animal Woman", whom he correctly presumed to be his mate. And finally, and most shockingly, he quickly realized that the Animal Man was none other than his prized pupil, Alan Douglas!

While the Veterinarian was a criminal mastermind bent on world domination, Dr. Zolos neither despised or hated the animal kingdom or Dr. Douglas. In fact, Dr. Zolos had always thought of Alan as the son he never had. He treated his minions with respect and understood the animal kingdom well enough to not abuse it's power.

Formerly the Veterinarian possessed no true superhuman abilities, relying solely on his scientific genius, intuitive skill in veterinary sciences and medicine, genetic splicing, invention, and a keen criminal intellect. However, after he allied himself with his former student, Professor Phineas P. Pines, now the megalomaniacal Botanist, he genetically spliced his body with a strand of the Zoologist's DNA, and was transformed into an Animal Man similar to the Zoologist.

The Veterinarian was one of the most intelligent and influential scientists on the planet, specializing in the fields of veterinary sciences, zoology, and genetic engineering, and possessed an intuitive genius for invention. As one of the top minds in the fields of veterinary medicine and science, the Veterinarian specialized in all aspects of the veterinary practices, including all aspects of animal anatomy, anesthesiology, behavior, dermatology, emergency and critical care, epidermalogy, internal medicine, cardiology, oncology, ophthalmology, neurology, radiology, surgery, and zoological medicine. He also possessed a high aptitude for genetic manipulation, having created many clones and spliced the genes of both animals and humans.

Equipment: None known.
Transportation: None known.
Weapons: The Veterinarian used a variety of medical and surgical appliances as weapons, including suringes filled with a variety of mutative compounds capable of altering DNA, as well as drugs, hallucinogens, toxins, serums, and muscle relaxants, scapels that he can use and throw with surprising proficiency and accuracy for a man of his age, anesthetic gases, saws, and buzzsaws.

The Veterinarian was inspired by comic book characters The Jackal and the High Evolutionary, both of whom were from Marvel Comics, as well as the supervillain Hush from DC Comics.

Retrieved from "https://marvelcomicsfanon.fandom.com/wiki/The_Veterinarian?oldid=258386"
Community content is available under CC-BY-SA unless otherwise noted.