The Stranger in Black 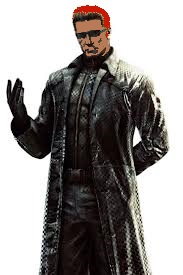 The Stranger in Black
Aliases

What do you want?

-- The Stranger in Black

In the beginning, God created the universe. When the earth was as yet unformed and desolate, with the surface of the ocean depths shrouded in darkness, and while the Spirit of God was hovering over the surface of the waters, God said, “Let there be light!” So there was light.

In the darkness, they waited for their return. For they would rule over all.

The Stranger in Black serves as the spokesman on behalf of The Association(Earth-928.2) , an ancient and incredibly powerful group whom he refers to as his "associates." Although outwardly polite and gracious, he represents a dangerous hidden agenda. When pushed, he drops any pretense of friendliness, openly threatening anyone who presents any difficulty to his associates.

Equipment: His cloth is armored, providing better protection than a normal clothes or heavy armor. Shades and gloves.
Transportation: Teleporation
Weapons: None known.

Albert Wesker (Resident Evil), The Silent (Doctor Who), Slender Man and Shadow (Babylon 5) were the inspiration for this character.

He very rarely engage in hand-to-hand combat to accomplish The Association(Earth-928.2) goals, relying instead on invisibility, behind-the-scenes maneuvering and their technology.

Retrieved from "https://marvelcomicsfanon.fandom.com/wiki/The_Stranger_in_Black_(Earth-928.2)?oldid=169785"
Community content is available under CC-BY-SA unless otherwise noted.