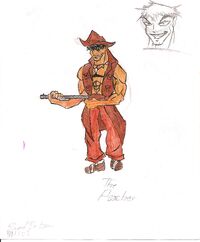 Known to the Australian and American governments
Alignment

Leader of the Trophy Hunters; member of the Negaknights, the Anti-Animal Alliance, the Silver Bullets, and the Hide n’ Seekers
Relatives
Unnamed father, unnamed mother
Universe

Citizen of Australia with a criminal record
Marital Status

Bradley A. Dotson
First appearance
The Maximums #3 (in flashback); The Zoologist, King of the Animals, # 5

Ryan McCatcher began his love for hunting and his hatred for animals at a young age. When he was five years old, he was chased by a vicious rottweiler after he shot it with a Beebe gun. Escaping it after jumping over a fence, he began to realize that animals were stupid, but powerful. Reading books about dangerous animals, like crocodiles, bears, and lions, made Ryan realize that he wanted to be the top of the food chain. Dedicating his life to become the greatest hunter in the world, he began practicing with his father’s rifles and learning all he could about hunting.


At the age of twelve, during a hunting expedition in Africa with his father, Ryan was attacked from behind by a wild leopard. Shocked, he attempted to shoot it, but the leopard swiped the rifle out his hands. Ryan was completely stunned before he took up the courage to attempt to wrestle the beast to the ground. Struggling with the beast, he grabbed a long vine and attempted to strangle the leopard, and eventually succeeded. But, with his victory came a powerful lesson: Ryan learned that even the greatest of hunters can become the hunted if they are unaware of what’s around the corner. From that day after, Ryan vowed that he would never become the hunted again.


A few years later, after dropping out of high school, Ryan McCatcher began his search for a way to become the most powerful hunter in the world. Going across the world, he began his quest to hunt and kill the most dangerous creatures on every continent. Befriending several fellow hunters, Ryan began his quest in Africa, where he shot and killed a mother martial eagle while showing off to his companions. However, little did McCatcher realize that he had earned the spurn of a mysterious Animal Man. After finding a campsite, McCatcher rested with his companions until one of his friends went off to get some wood. The two then heard the man scream and Ryan went searching for him. When he returned to the campsite, however, he found both men eaten alive by killer ants. Trying to escape, he was confronted by the Animal Man and subsequently beaten to submission. He was then left alive for the authorities and was remanded to several prison hospitals over the next several decades.


Obsessed with his encounter of the Animal Man, McCatcher laid in hospital beds for decades, slowly succumbing to the injuries he had received that faithful night. He knew that he would never get his chance to get revenge on the creature and slowly began to give up on life. However, that changed when he was approached by a Dr. Alexander von Zolos, who offered him a chance for restored power and revenge on the Animal Man in exchange for his services. Hesitant, he took the serum and his health and youth was restored, as well as so much more. His physiology was enhanced to superhuman levels, but even more so was his senses, which were heightened to incredibly superhuman levels.


Calling himself the Poacher, he began his career as the greatest hunter in the universe. Gathering several hunters and poachers, the Poacher began his quest to hunt and kill the deadliest creatures in the world. Beginning in the heart of Africa, he killed lions, leopards, crocodiles, rhinos, elephants, pythons...… and werecheetahs. During his stay in Africa, the Poacher heard tales of half-human, half-cheetah beings called werecheetahs. Journeying to the Cheetah Valley in Nigeria, he quickly learned the rumors were true.


Sending his gang of poachers to slaughter them all, he watched the “wonderful bloodfest”, before stopping one of the poachers from killing one of the babies. Telling the poachers to bring it back to Australia so they could place it in a freakshow, the Poacher had high hopes for the little kitten. However, before they began their journey back to Australia, they were caught by an American anthropologist couple, who contacted the police. The couple stopped the Poacher from stealing the baby. The Poacher, however, managed to escape.


Returning to Australia, the Poacher hunted kangaroos, Tasmanian devils, dingoes, ostriches, saltwater crocodiles, great white sharks, and boa constrictors. Then he traveled to Asia, where he hunted game for a few more years, hunting mainly tigers. Every five years he would travel to a different continent, hunting and killing the most dangerous animals in those lands, ending this pattern with landing in North America. A little while before, during his travels, he realized that he hardly aged a day since he was genetically altered. It turned out his experiment almost completely halted his aging process. During his stay in the United States, the Poacher learned of the superheroine known as Cheetari, who had just recently joined the superhuman team, the Maximums. Shocked by this news, the Poacher quickly realized that it was the "kitten" he kept alive all those years before.


Now knowing that a threat to him was alive and well, the Poacher quickly began making plans to hunt Cheetari. Tracking down her foster parents, whose smell still lingered in his mind after their encounter years earlier, the Poacher easily captured them and brought them back to his base on Ayers Rock. Somehow finding a way to contact Cheetari, he challenged her to meet him at Ayers Rock for a “little game” for the lives of her parents. Confused, Cheetari left the Hero Hood and flew to Australia, where she found his hideout.


The Poacher introduced himself as the man who made the entire werecheetah species extinct….. almost. Realizing that this man killed her biological family, Cheetari attempted to attack him, but quickly learned that he was easily matched, dodging her attacks effortlessly. Then, he brought out a shotgun and attempted to shoot her, but quickly realized that she was also easily matched, effortlessly dodging his gunshots at point blank. Ending his fire, he submitted a challenge: a hunt. If Cheetari could find him before he found her, he would let her parents go. But, if vice versa occurred, he would kill both her and her parents.


As the hunt for each other began, Cheetari attempted to find him instantly, but instead the Poacher decided to play along. The search lasted all night long. He then decided to “cheat” a little bit by listening for her and then unleashing illusions on her to confuse her. However, although easily becoming confused, Cheetari resisted the illusions with all of her might and ended up finding the Poacher himself and slashing him into unconsciousness. Cheetari freed her parents, handed him over to the Australian federal authorities, and returned back to America.


This was only the beginning, however, as the Poacher escaped federal custody when he caused the police officers to hallucinate from his illusions. Determined to make Alayna suffer, he journeyed back to America and created the illusionary disguise of Jerome Penswick, a down-on-his-luck butler who wished to serve the Maximums. The Maximums, however, already had a butler, in the form of Lego Lad’s creation, Thomas the Living Locomotive Man. Finding a way to short-circuit Thomas, the Poacher locked him up in a warehouse where no one would be able to find him. Then, under the guise of Jerome Penswick, offered his services to the Maximums. This time, they reluctantly agreed.


“Working” for the Maximums for several days, the Poacher constantly kept his eye on Cheetari, waiting for the right opportunity to strike. Then, during the middle of the night, the Poacher entered Cheetari’s base, and tranquilized her, then took off into the night. The next morning, Alayna woke up to find that she was not in her bed anymore. Finding herself in the middle of a jungle, she then heard the voice of Jerome, who was projecting his voice to her. Learning that Jerome was none other than the Poacher, Alayna quickly sought to hunt him down. However, she quickly learned that she was the hunted. The jungle she was in was on an island the Poacher rigged with hundreds of booby traps.

The Poacher is the single greatest hunter in the universe. Granted virtually every sensory, detection, and perception-based power through enhanced mystical serums and scientific formulas and experiments, the Poacher will always find those he preys on.

McCatcher recently obtained several psionic senses, which, although of a minor level, make him much more powerful. He has developed precognition, clairvoyance, and psychometry.

The Poacher is able to lift up to a maximum of ten tons under optimum conditions.

The Poacher, possessing a superhuman sense of touch, has a low threshold for pain. Even a mild smack on the back of the head can cause him severe pain. He can also be overwhelmed by any sudden, loud, or distracting noises, scents, sights, or tastes that overcome him before he can drown them out. His sense of smell can be irritated by any extremely foul odors or stinks, such as the spray of a skunk. He is also extremely cocky and overconfident, which often leads to his downfall. He can also be over-obsessive, going mad when he fails to capture, kill, or defeat his intended quarry.

Equipment: None known.
Transportation: The Poacher drives a camouflaged off-road H3 Hummer specially designed and outfitted with specialized weapons, including a bolo-launcher, gatling gun, and a gigantic net attachment.
Weapons: The Poacher possesses a variety of weapons that he constantly carries on his person. Originally, he merely had standard weapons, such as his elephant gun and pistols with standard ammunition, along with knifes, a whip, bolos, and standard boomerangs. After teaming with the Veterinarian, and later the Creature Collector, his weapons were greatly upgraded and equipped with highly advanced technology.

Retrieved from "https://marvelcomicsfanon.fandom.com/wiki/The_Poacher?oldid=200390"
Community content is available under CC-BY-SA unless otherwise noted.