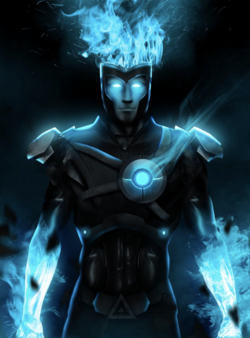 Multiverse
Base Of Operations
The Outside
Characteristics
Gender

The Multiverse is a very beautiful, yet extremely fragile thing. I was born out of the cracks that have been forming since the dawn of time. It is my purpose to repair these cracks, so that a being such as myself has no need to exist. And now... it is your purpose too.

The Outsider is an near God-like, powerful creature who was born out of extradimensional energy that leaked into a place beyond the multiverse known as The Outside. Looking across the multiverse and taking note of the countless fractured realities, the Outsider came to the conclusion that it was too much for him to handle on his own.

He then spent a good amount of time searching through some of the most damaged worlds and selecting his champions, recruiting two teams dubbed "The Outsiders" and "The Renegades". The Outsiders would be his A-Team, traveling to the worlds that required heroes willing to make the ultimate sacrifice. While the Renegades would be simply that, renegades who travel to the worlds that require more extreme solutions to solve.

Retrieved from "https://marvelcomicsfanon.fandom.com/wiki/The_Outsider_(Multiversal_Being)?oldid=253640"
Community content is available under CC-BY-SA unless otherwise noted.