The New Adventures of the X-Men 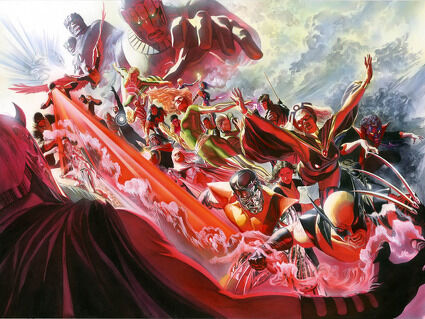 "The New Adventures of the X-Men" is a retelling of the popular "X-Men" comic books series, written by Seth Graystone.

Major antagonist for most of the series, they later become allies to help stop Apocalypse and X-Calibur.

A group of deformed mutants, they hide in the sewers. They are antagonists of Season One, but becomes allies of the X-Men in Season Three.

X-Calibur is a team led by Gambit, they loyally follow "Apocalypse", and all were recruited as "Horsemen of the Apocalypse". They are the main antagonists of Season Three.

Cyclops also joins the team as its new leader, Polyphemus, when his eyesight is recovered.

Order of the Black Phoenix

The "Order of the Black Phoenix" is a secret cult of sorts led by Mr. Sinister. In order to gain ultimate power from harnessing the Phoenix Force. They serve as major antagonists.

A group of powerless humans who are against mutant-kind, they captured Leech and forced him to make a "Mutant Vaccine".

Season One: The Beginning

Logan Howlett is ambushed by Magneto and joins the X-Men as Wolverine.

A demon is spotted in Bayview, and the X-Men encounter Kurt Wagner, the mysterious Nightcrawler.

Kitty Pryde's mutant abilities awaken, and she is targeted by the Brotherhood. Jean saves her, and Kitty (now known as "Shadowcat") joins the X-Men.

A new mutant joins the Brotherhood, and is told to use his earthquakes to destroy the home of Senator Kelly. Nightcrawler and Cyclops defeat Avalanche, whom vows to destroy the X-Men.

Wolverine abandons the X-Men face a figure from his past, while the X-Men try to convince a new young mutant to join them.

A group of underground mutants named the "Morlocks" arise and try to kill all non-mutants in Bayview. Rogue has to master her powers to defeat the Morlocks.

Rogue uses her powers on Callisto, and soon becomes obsessed with destroying the humans.

The X-Men face off with Rogue, the newest leader of the Morlocks, and a mental showdown between Xavier and Rogue ensues.

After defeating Rogue and the Morlocks, Xavier falls into a coma, thinking back to his past. Meanwhile, the Brotherhood plans their final mission.

The Brotherhood attacks the Xavier Institute, with help from Sabretooth and even the Morlocks. Wolverine and Sabretooth battle in the front yard, while Nightcrawler and Toad clash through the nearby forest. Magneto prepares to kill Xavier.

Cyclops fights Blob in the front hall, while Sunder fights Rogue. Caliban tries to keep Jean from saving Xavier, but the two girls defeat their enemies. Magneto faces Rogue and Jean, while Sabretooth falls off of a cliff. Rogue drains Magneto of his powers, but is stuck in his memories.

Rogue learns of Magneto's past and what he did to his children and kills him, while the Brotherhood and Morlocks flee. Rogue leaves the X-Men, and Wolverine leaves in search of Sabretooth.

With Magneto's apparent death, the X-Men unofficially disbanded. Wolverine is chasing down Sabretooth in the Canadian wilderness, Rogue has vanished, and the rest are leading normal lives. Until Mystique and the Brotherhood attacks.

Mystique kidnaps Xavier, and Cyclops leaves in search of Wolverine, whom is busy battling the demonic Wendigo.

Cyclops and Wolverine team-up to fight a cursed archaeologist (Paul Cartier), whom has become the cursed Wendigo. The two trap Wendigo in a cave-in, but the beast, with help from Sabretooth, breaks free.

When Toad and Blob try to take over the Brotherhood with the disappearance of Mystique, a short battle ensues while Cyclops and Wolverine are recovering from Wendigo.

When the Institute seems to burn to the ground, the X-Men are led into a trap formed by Mastermind. When they learn of his powers, will they be able to combat the Master of Illusions?

Jean Grey uses Cerebro and combats with Mastermind on a psychic level. With his defeat, however, the X-Men are swiftly defeated by two new figures.

Scarlet Witch and Quicksilver join the Brotherhood and help them combat the X-Men, and also reveal their master plan: To kill Rogue!

Scarlet Witch and Quicksilver defeat the members of the Brotherhood and almost kill Mastermind, and the powerless but alive Magneto returns as leader of the Brotherhood. They also start their plan: To drain Rogue's powers, which were stolen from Magneto in "End Game, Part 3", and kill her! The X-Men lead an assault on the Brotherhood's base to save Rogue.

Mastermind, beaten and near death, helps Rogue by allowing her to drain his powers, but he dies in the midst of it. She tricks Blob and escapes, while the X-Men battle the Brotherhood. The Scarlet Witch battles Jean Grey, while Wolverine fights Sabretooth (Now part of the Brotherhood alongside Wendigo). Cyclops encounters Wendigo, while Storm fights Mystique.

After Mystique torments Storm with images of the past, she is seemingly killed with a blast of lightning. Sabretooth defeats Wolverine in battle finally and steals his signature dog tags, while Scott defeats Wendigo and seemingly breaks the curse. Nightcrawler saves Rogue from being attacked by Toad and defeats him, but Quicksilver appears to challenge him. Magneto completes his machine, when Rogue challenges him to a fight.

After defeating their enemies, the X-Men charge Magneto, but he starts to drain Rogue's powers. The X-Men scramble to save Rogue, when a young mutant held prisoner by Magneto appears and destroys the machine. However, Magneto had already stolen his original powers from Rogue, as well as the powers of Mastermind, and flees with his children. This young mutant reveals himself as Havok, Cyclops' little brother.

Havok joins the X-Men, while Wolverine decides to track down Sabretooth, and rescue Xavier, on his own. Rogue rejoins the team, and the new group moves out to find and recruit two young mutants. However, the ambitions of a con man lead to a failure in the field.

John, now calling himself Pyro, partners up with Gambit to take on the X-Men. Iceman joins the team, and together, Gambit and Pyro are beaten. However, Havok is recruited as a new member of "X-Calibur", leaving Scott shocked at his brother's betrayal.

A young mutant called "Angel" aides the X-Men in saving lives, but refuses to join them. Meanwhile, X-Calibur attempts to recruit him.

Kidnapped by X-Calibur, Angel is told he will "Become the first Omega-Human. He who would survive when It came.". He is injected with a mysterious virus and turns into the emotionless "Archangel".

An odd mutant named Legion appears, and reveals he has kidnapped Xavier after stealing him from Mystique. With his ability to adopt multiple identities with different powers, he is almost impossible to locate. But when Wolverine returns, Legion's time is up.

Xavier's step-brother Cain Marko appears as the Juggernaut, and almost kills him, but after his helmet is shattered, Jean assaults his mind. Xavier finally wakes up, and reveals bad news: Apocalypse is coming.

The final battle begins, and a duel between Cyclops and Havok ensues in the streets, while Jean and Storm fight off Apocalypse's demon soldiers. When Apocalypse defeats Callisto, Xavier, and Magneto, he appears before Cyclops and grants him control over his powers. Now with Cyclops (Now Polyphemus) leading the Horsemen of Apocalypse. Meanwhile, Colossus starts to have a change of heart.

Colossus leaves X-Calibur and helps the X-Men fight Polyphemus, but is killed by Death. Rogue absorbs his powers and beats Death half to death. With help from her teammates, Rogue defeats Death, who turns back into Remy LeBeau. Sabretooth arrives and helps Wolverine fight Archangel, whom is shot down by Scarlet Witch. With only Havok, Polyphemus, and Pyro left to protect Apocalypse, how could the X-Men lose?

Jean enters the mind of Polyphemus and sees what's been told to X-Calibur. Using a power deep inside her, she combats the piece of Apocalypse in his mind. Scott is freed, and a final battle happens between the Summers brothers. Havok is defeated and knocked out, while Iceman finally freezes Pyro solid, defeating him. The X-Men, Brotherhood, and Morlocks all gather together to combat Apocalypse.

Apocalypse prepares to destroy the world in order to rebuild it in his own image, and the united mutants all attack him. Jean uses Cerebro to fight on even ground with Apocalypse, while Blob, Colossus, and Sunder focus on beating him. When the spirit of Death appears offering power to beat Apocalypse, Wolverine accepts and becomes the new Incarnation of Death. Using his newfound powers, he gravely injures Apocalypse, but is defeated and sent to another dimension. Using her powers, Jean defeats Apocalypse, and he is shot into another dimension, like Wolverine. In the aftermath, the mutants look for their dead and wounded, while Wolverine travels through a damaged, destroyed world.

Season Four: The Morlocks, the Vaccine, and the White Queen

With Gambit, Colossus, and Wolverine dead, three of the strongest mutants have died, and the X-Men are severely wounded. Withe Brotherhood and X-Men uniting, the Morlocks have gone into hiding again. Sabretooth, robbed of his final fight with Wolverine, wanders off to die in the wilderness of his homeland. However, a new mutant named Cable has appeared, with a warning of the future.

Cable reveals part of his past, while many new mutants' powers awaken, including those of Emma Frost, now the "White Queen".

Cable warns the team of Mr. Sinister, and sets out to fight him one-on-one. However, the X-Men save him, and he joins the team.

It is revealed that Senator Kelly and his new right-hand man, Graydon Creed, have found a "vaccine" to the mutant race. Using the powers of the young captive "Jimmy" (Now called "Leech" by Creed), they play an endless loop of the vaccine painfully curing a young mutant that had runaway from home. The X-Men/Brotherhood splits in two as hey fight over what to do.

With Callisto captured by the MRD, she is cured and thrown onto the streets, hunted down by her former comrades. Hiding out with Storm, they are forced to face the Morlocks in a battle, deadlier than ever. Meanwhile, Wolverine finds a familiar figure in the Land of the Dead: The White Ghost.

Sabretooth, still in the wild, remembers his past when seeing Graydon Creed on a TV at a bar. Now knowing of what his son has done, he has tasked himself with killing Graydon.

The X-Men learn that the newly reformed Brotherhood is planning to kill Leech using their newest members, Legion and Juggernaut. As Graydon and Kelly arrive at the Mutant Prison, Sabretooth prepares to kill his son. Meanwhile, Cable tells the X-Men of what could happen if all goes wrong.

Now knowing the stakes, the X-Men all unite and fight the Brotherhood and Morlocks. Using their combined powers, Emma and Jean open a portal and free Wolverine, now Death, back to their world. Wolverine and Sabretooth battle, but Graydon is fatally injured in the crossfire. Sabretooth lunges for the kill, and Wolverine prepares for the end.

With Graydon now dead, Sabretooth and Wolverine fight to the death, and neither will stop until the other is dismembered and nothing but a shell. Emma betrays Jean and the two engage in a psychic battle, while Xavier battles Magneto.