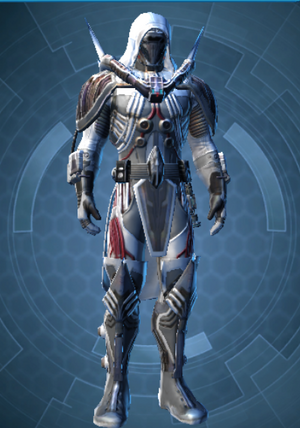 The Infinity Suit is a suit of armor that is used by Dark Reign. the suit was made from nuggets of raw Uru and can withstand the same pressure as Thors Hammer.

Once powered by the Infinity Stones. the suit will give its owner the power of all the stones.

Infinity Stones: When the Infinity Suit is complete, each stone grants it the following abilities:

Time Stone: Total control over all aspects of time including time travel, stopping time, slowing down or speed up flow of time and to accelerate or slow down aging. Space Stone: Limitless manipulation of space, allowing for teleportation, dimensional manipulation, creation of wormholes, etc. Soul Stone: Limitless manipulation of souls both alive and dead also has shown to be able to evolve or devolve a beings physical self as well as their mental capacities. Reality Stone: Locally or universally alters the natural laws of the universe to the wielders will. Power Stone: Controls all of the power in the universe. It can be used to augment or inhibit any force. Mind Stone: Taps the user into the universal consciousness, allowing for unlimited manipulation of psionic powers including telepathy and telekinesis.

Retrieved from "https://marvelcomicsfanon.fandom.com/wiki/The_Infinity_Suit?oldid=250490"
Community content is available under CC-BY-SA unless otherwise noted.