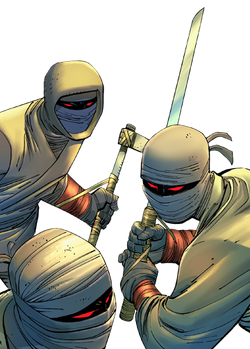 Free from the fear of death, these pieces of shit step up, kill their master, take over, and paint the shores of the Far East with the blood of anybody who stands in their way. They grow in size, power, wealth spread across Asia and finally give themselves a name. Yami no te. It means, "The Hand.""
"And did they have a goal?"
"Weapons. It's always weapons.

According to the legends, centuries ago, in East Asia, a vicious group of warlords and their gangs ruled over the land. One day, they encountered the power of immortality. Now, fearless of death, the group, expanded their control over Asia. Only after they became a powerful empire, the group called itself "Yami no te" or the "Hand", with the goal to activate the human weapon known as Black Sky.

However, the Hand made many enemies. As they massacred a village, one boy managed to kill some of their greatest warriors. The Hand named the boy the "Chaste", who over the years recruited warriors to fight the Hand. The Order of the Crane Mother faced the threat of the Hand as well, training their warriors and the Iron Fist to destroy the group.

Soon after they founded Rand Enterprises, Wendell Rand and Harold Meachum were approached by Madame Gao, one of the oldest Hand leaders, for a deal. Despite Rand's disapproval, Meachum agreed to work with her. Meachum opened laboratories for manufacturing heroin in China for distribution in New York City. As Rand suspected it, he flew to China with his family to expose the affair. Meachum poisoned the pilots with a poison given by Gao. The plane crashed in the Himalayas, killing Rand, his wife and seemingly his son.

However, Meachum was diagnosed with cancer. Gao offered him to be resurrected in exchange for using Rand Enterprises for the Hand's plans. Over a decade, the Hand gave Meachum the orders for the company, which led Gao to become one of the biggest drug dealers in New York City.

Remember your promise to me and those I speak for.

After the Battle of New York, Wilson Fisk, a man who thought he could fix and save his neighborhood of Hell's Kitchen, started a criminal organization consisting of himself, human traffickers Russian siblings Vladimir and Anatoly Ranskahov, and financial accountant Leland Owlsley. The Hand themselves joined this cooperation with Nobu Yoshioka through the Japanese gang the Yakuza and Madame Gao. While being part of the organization, Nobu's group never seemed to contribute to the group, something that Fisk's assistant James Wesley noticed.

You have three limbs left, and other appendages no man wants to lose. Where is Black Sky?

Stick, a member of the Chaste, an ancient organization sworn to fight and defeat the Hand, found Aito and ordered him to tell him where the Black Sky was. Aito, fearing for his life, swore upon his family that the Black Sky was on a ship heading to New York City. Stick killed Aito, telling him his family was better off without him.

I am bound by certain requirements, even I have those I must answer to. After the setback at the docks, I can afford no further disruptions; do what you must, but do it quickly.

Yoshioka and his men waited at Pier 81 for a shipment to arrive. The shipment contained the Black Sky, who appeared to be a prepubescent boy. Stick and a man in a black mask attacked his men, but the Black Sky was transported away in a truck. However, Stick eventually caught up with the truck and shot the boy through the heart with an arrow.

You are a worthy opponent. It is an honor to claim your life.

--Nobu Yoshioka to the masked man

Seeking to kill the Masked Man, Nobu Yoshioka hid from the shadows and slowed down his heartbeat and lowered his body temperature. Yoshioka noted that Stick taught the man their ways, though the man tried to tell him that he was not associated with Stick or his war. Yoshioka, however, pointed out that he still aided him and, regardless of his allegiance, was still a warrior deserving an honorable death. The man told Yoshioka that he came searching for Wilson Fisk, as Fisk had murdered Elena Cardenas to bring him into their trap, but the man decided that he would have to settle for defeating Yoshioka.

Yoshioka insisted that the man show him respect as he just did; the man replied that he had to earn it. The battle began and Yoshioka quickly proved himself the superior fighter, first throwing Bo Shuriken at him while countering and dodging the man's blows with ease. He then proceeded to take out his Kyoketsu-shoge and cut the man numerous times across his body. Although the man used his batons to deflect several blows, Yoshioka's skill continued to best him and he was stabbed in the side with the blade and dragged across the floor, causing the man incredible pain and slowly killing him.

Despite this, the man managed to continue fighting, impressing Yoshioka, who told him that he is an honorable opponent. The man managed to kick Yoshioka into an oil tank, spilling gasoline over him. Yoshioka went to kill his opponent but the man managed to grab one of his eskrima sticks, and deflect Yoshioka's blade, accidentally causing it to hit a light post. The sparks landed on Yoshioka, lighting the gasoline and causing him to be engulfed in flames. Despite this, Yoshioka still proceeded to attack Murdock before succumbing to his wounds and dying while his body continued to burn.

And the man in the mask, you have found his body?"
"No."
"Yet Nobu's clan prepares for what is to come."
"They are distracted."
"But their memories and their knives are forever sharp.

The Hand was able to resurrect Yoshioka, who once again assumed leadership of the organization. Since Wilson Fisk's entire organization had crumbled upon his imprisonment, The Hand operated quietly, secretly infiltrating the Japanese branch of the Roxxon Corporation.

The Hand kidnapped Roxxon accountant Stan Gibson's son Daniel to ensure his cooperation. Daniel, along with other young people, were used as hosts to incubate organic particles in their blood. Then their blood was slowly and consistently drained to be used in a ritual involving a stone sarcophagus. Meanwhile, other Hand workers began digging an enormous hole in Midland Circle.

The Black Sky is not a myth, we have wanted you since you were a child, you were taken from us but now you have returned."
"What the hell are you talking about?"
"It's you Elektra, you are the Black Sky, our greatest living weapon.

Nobu Yoshioka realized that Elektra Natchios, who was a child when she was first recognized as a Black Sky, had returned to New York City. He sent Hand ninjas to kidnap Stick so that he could be tortured and coerced into giving up Natchios's location. Although Stick never betrayed her location, she went looking for Stick to kill him, and was confronted by Yoshioka, who told her of her destiny as the Black Sky. She was tempted to join The Hand, but Daredevil convinced her not to.

After Natchios fled with Stick and Daredevil, Yoshioka realized that Daredevil had an enormous influence on her, and set an elaborate trap to lure him out and eliminate him. He ordered Tyler to abduct twenty people whom Daredevil had either saved or put away, knowing that Daredevil would appear to save them.

When both Daredevil and Natchios did just that, Yoshioka and the Hand ninjas engaged them in a brutal fight in which the Hand overwhelmingly outnumbered the two. In an attempt to kill Daredevil, Yoshioka accidentally killed Natchios.

Furious at losing the Black Sky, Yoshioka ordered his ninjas to finish off Daredevil, but the Punisher, having heard about the fight on a police radio, shot several Hand ninjas from a nearby roof. Daredevil fought and vanquished Yoshioka, using his billy club to throw him from the roof.

Hand ninjas secretly dug up Natchios's grave and exhumed her body. They placed it into the stone sarcophagus and as they lowered the lid respectfully, a heartbeat was faintly heard.

Dealings with Other Heroes

The Hand has also crossed swords with Wolverine, Spider-Man, the Avengers, and the X-Men. More than anyone else (excepting Elektra), however, they have interacted with Psylocke.

Members of the Hand are practitioners of powerful occult magic and can murder a person and bring that person back to life as a servant of the Hand. Only Elektra, Psylocke, Northstar and Wolverine are known to have reversed this programming.

Recently, Kingpin took the leadership of The Hand as the link between all factions, much to Gao, Nobu, Sowande, Bakuto and Murakami's dismay.

Retrieved from "https://marvelcomicsfanon.fandom.com/wiki/The_Hand_(Earth-1010)?oldid=198867"
Community content is available under CC-BY-SA unless otherwise noted.