"The Frozen King" is the tenth episode of Assemble!'s Season Two and the thirty-second episode overall.

-Thor… - Sif told the God of Thunder after she had gone to Midgard to warn him. –We will need thou in Asgard… Loki has taken over the throne after the All-father has fallen into his Odinsleep. –

-Yes, Thor. And we need you to go. The Frost Giants are in Asgard too as Loki’s guards. Every rebel has been killed, and even the Enchantress and the Executioner have important ranks inside the royalty. –

-That is really wrong… -

-I have come here since my brother has committed treason while opening the Bifrost. –

-Your actions will not be in vain, Lady Sif. –

-Well, considering the situation in Asgard is worrying, you can leave Avenger’s duty and go help your world. – Captain America said.

-Heimdall, we are ready. – Sif said looking at the sky, and the Asgardians were taken to their Realm.

-Thor… - The Valkyrie exclaimed as the God of Thunder walked into his home Realm.

-Thou are not getting out. – One of them said.

-You do not know who you are fooling with. – Sif replied bitterly.

-We are not scared. – Another of the Jotuns murmured and ran to slash Sif with his axe but was stopped by Thor’s Mjolnir.

-Royal Guards or not… Do not get your axes near my sister. – Heimdall said and slashed his Hofund at one of the Jotuns.

-TREASON!!! – One of the Frost Giants shouted.

Meanwhile, at the Throne Room, King Loki was being confronted by the Warriors Three: Fandral, Hogun and Volstagg.

-Do you actually think you can defeat Loki?! Bow before your King!!! – Loki ordered.

-We do not consider you King, Loki. – Volstagg said firmly.

-Then I have no choice but to show no mercy with you. – Loki replied and created Mirror Images of himself.

The Warriors Three attacked every one of the Loki’s, until only the real one was standing.

-You are now enemies of Asgard, fools! – Loki exclaimed and five Jotuns pushed the Warriors out of the Throne Room.

Amora and Skurge were waiting Thor, Sif and Valkyrie in the yards of the Palace.

-I was not talking to you! – Amora yelled at the formidable Lady.

After some minutes of fighting they were joined by the Warriors Three in the fight, but they were overpowered by Enchantress, Executioner and some Jotuns.

-I am really grateful for your work, Guards. – Loki said walking to the yards. –O Brother, were were thou?! – The Jotun laughed wickedly.

-Enchantress, Executioner, take Sif, the Valkyrie and the Warriors Three to the Cells. – Loki ordered. –While Thor and Heimdall will be thrown down the Bifrost. –

Loki, a Chieftain Jotun and an Ice-Smith took Heimdall and Thor to the edge of the Bifrost.

Thor lifted up his hand calling the Mjolnir and yelled: “FOR ASGARD!!!”

Heimdall joined him in the attack getting his Hofund out. Thor threw the Mjolnir at Loki and his Jotuns.

-Okay, Odinson! – Heimdall replied and ran away as Thor flew away.

-What do we do now, Lady Sif? – Fandral asked the female warrior at the cells.

-We find Thor and my brother. That is for sure. – Sif answered firmly. 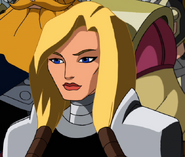 "Thou are not getting out."

"I was not talking to you!"

After some minutes of fighting they were joined by the Warriors Three in the fight, but they were overpowered by Enchantress, Executioner and some Jotuns.

Loki, a Chieftain Jotun and an Ice-Smith took Heimdall and Thor to the edge of the Bifrost.

"We find Thor and my brother. That is for sure."
Add a photo to this gallery

Retrieved from "https://marvelcomicsfanon.fandom.com/wiki/The_Frozen_King_(A!)?oldid=55742"
Community content is available under CC-BY-SA unless otherwise noted.