The Fantastic Four and the Paradox of the Mole People

The Fantastic Four and the Paradox of the Mole People is a Marvelette Cinematic Universe film, fast-tracked into production following Disney's purchase of 20th Century Fox. It was released on May 6, 2022, following Black Panther: Realm of Kings and preceding Captain Marvel: Galactic Storm. The film is directed by Denis Villeneuve.

As the Fantastic Four begin to finish up their exploration across the galaxy, culminating in a wedding ceremony between Mister Fantastic and Invisible Woman, all of reality is thrust into chaos upon their return to Earth. As Reed and Sue's daughter from the future, Valeria, battles Kang the Conqueror across time, everything that can prevent the fabric of time from collapsing in on itself is... the Mole Man?

Concept art of Krasinski and Blunt as Reed and Sue

Concept art of the FF 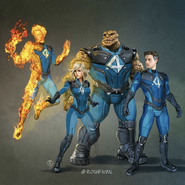 More concept art of the FF 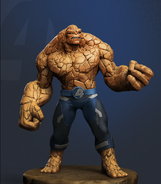 Joe Keery on set, filming a scene as Johnny Storm 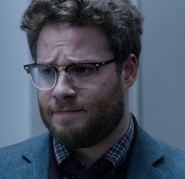 A still of Seth Rogen as Ben Grimm

Screencap of Oscar Isaac filming a flashback of Victor Domashev 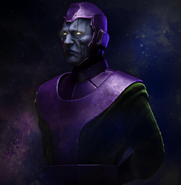 Concept art of Kang the Conqueror 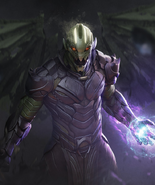 Concept art of Annihilus, who was eventually cut from the main story and relegated to a post-credits scene
Add a photo to this gallery
Retrieved from "https://marvelcomicsfanon.fandom.com/wiki/The_Fantastic_Four_and_the_Paradox_of_the_Mole_People_(Marvelette_film)?oldid=244638"
Community content is available under CC-BY-SA unless otherwise noted.