The Avengers VS Zombies 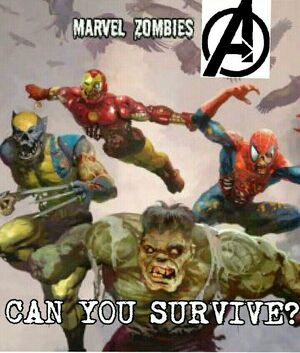 Title
The Avengers VS Zombies

Can The Avengers Survive The Apocalypse?

After Loki gains the throne of Asgard, he makes an attempt to invade earth again but by forcing the Earth's Mightiest Heroes to fight what they protect: Mankind. Loki causes a zombie outbreak on Earth, people are eating each other, can The Avengers survive along with the remaining humans? Can they save Earth before it's too late? The movie starts with Loki planning to start the outbreak, the first zombies are created. The police handles them but the infection spreads, Nick Fury calls for The Avengers help along with two newcomers: Wolverine and Spiderman! Thor easily beats zombies but Loki predicted this and upgraded the zombies to withstand lightning from mjolnir. The infection spreads globally, Captain America comes up with a plan to bring civilians to the Avengers tower. But soon after, the super soldier was bitten by a zombie and infected. His serum made him a durable zombie and a tough fight for our heroes. Ironman began working on a new suit to combat zombies. Loki makes his zombies smarter. Spiderman gets bitten by a civilian who hid his bite, he used his powers to fight the Avengers and Wolverine forcing them to abandon the Avengers tower. The Avengers go to a crashed Helicarrier and hide there but a nearby hoard of zombies attacks. The group leaves but Banner sacrifices himself by transforming into the Hulk and fighting off the zombies while the group escapes. He gets bitten enough times to infect him making him a zombie. Thor, Ironman, Wolverine and a few surviving civilians find themselves struggling to survive, Wolverine slashes apart zombies, Stark works on his new suit and Thor tries to find the cause of the zombies. Ironman finishes his new zombie murdering suit: The Iron Zombie Slayer. Him and Wolverine protect the humans as Thor realised that the zombies being immune to mjolnir had a connection with their origin. He went to Asgard and found Loki, he battled him to find the cure, he won the battle eventually then returned to Earth to save mankind.

This is a non-canon movie made as a "what if" movie.

Stan Lee was the first zombie who bit Captain America

Retrieved from "https://marvelcomicsfanon.fandom.com/wiki/The_Avengers_VS_Zombies_(Movie)?oldid=91037"
Community content is available under CC-BY-SA unless otherwise noted.