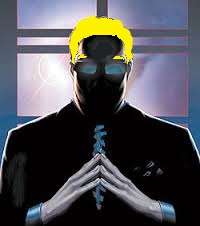 Clone from different cells of mutants from the 21 century by The Association take from old Weapon x programs after the fall of the America goverenment. The Weapon a.k.a Weapon XL was activated when Herod fall.

He has been Enhanced to levels unobtainable by normal human beings.

1.Telescopic vision: The Weapon's visual acuity is considerably beyond that of a normal human. He can see objects at much greater distances, with perfect clarity, relative to an ordinary human. He is able to see the flicker-fusion horizon(the speed at which some objects appear as a blur) in his eyes is superior to other people. what appears as a blur to most people, he can see perfectly.
2.Super hearing: is the ability to hear sounds, frequencies, and pitches that not normal humans can not.
3.Super Smell: is the ability to smell things at greater distances and with greater accuracy than normal Humans.
4.Super Taste: is the ability to experiences the sense of taste with far greater intensity than average.
5.Super Touch: The Weapon has this ability to Wallcrawling like Spiderman.

At his peak, he possesses sufficient superhuman strength to lift up to 1 ton.

Equipment: None known.
Transportation: Teleporting
Weapons: Any object in The Weapon's hands is a potential weapon. He has two adamantium katana-style blades; formerly twin katanas and a pistol.

Retrieved from "https://marvelcomicsfanon.fandom.com/wiki/TheWeapon(Earth-928.2)?oldid=148290"
Community content is available under CC-BY-SA unless otherwise noted.