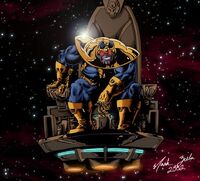 Exile and the Quest for the Infinity Gems

Despite the benevolent demeanor of his father, the wayward Prince Thanos was cruel and proud. He believed that he deserved to rule and not his "weak-willed" father. He rebelled against his father (king of Titan) but failed to rally support and was defeated and exiled. Promising to return one day and claim his rightful rule, Thanos went out into galaxy seeking greater power. He lived a life of conquest, his insatiable thirst for power driving him to battle after battle. After many years, rumors of the Infinity Gems reached Thanos' ears. It was said that the wearer of the Infinity Gems would possess supreme power. Intrigued, Thanos embarked on a quest to obtain the gems.

Eventually succeeding in his quest, Thanos held the gems within his Infinity Gauntlet, adding all their power to his own. Truly, Thanos would now be unstoppable. To test the strength of the gems before challenging his father, Thanos decided to test the gems against Earth's heroes.

A Change of Heart

Thanos arrived in New York, eager to test the strength of the Infinity Gauntlet. Almost immediately after his arrival, a group of Avengers (Captain America, Iron Man, Thor, Spider-Man, Hawkeye, and Hulk) challenged him. Using the gems, Thanos surprised the heroes and quickly dispatched Iron Man, Captain America, and Hawkeye. Spider-Man leaped about, attempting to outmaneuver the Mad Titan. Thanos proved to be faster and caught Spider Man with a punch to the stomach, rendering him unconscious.

The Hulk attacked next, hoping to overpower Thanos, though he too was unable to match Thanos. The colossal Hulk was knocked unconscious in one blow. Thanos was caught by surprise and knocked to the ground by Thor, though he remained virtually unharmed. After a quick battle, Thanos stood victorious over the "God of Thunder". "Earth's Mightiest Heroes" had fallen.

Though after such a display they knew they stood little chance of victory, the X-Men arrived shortly after. After a long battle in which Thanos was injured greater than he had expected to be, Thanos unleashed a psionic attack the incapacitated the remaining X-Men. It was then, in the wake of the battle, that Thanos' eyes fell on Elizabeth Braddock, a.k.a. Psylocke, who was among the X-Men who lay defeated. He was taken aback by her beauty and immediately his dreams of conquest fell by the wayside.

Thanos brought the defeated X-Men back to their headquarters and when they recovered he apologized for his attack, pleading forgiveness. For good reason, the X-Men were wary of Thanos' sudden change of heart. Over time, he proves his good intentions and grew close to the X-Men, especially Psylocke. Thanos grew very fond of the Earth and the humans who lived on it. He began to see another way of life, living among the humans and using his strength to protect them.

Eventually, Thanos officially joined the X-Men. Even the most wary of the X-Men were convinced of his change of heart when he defeated Apocalypse, who had been on the verge of victory, effectively saving the Earth. This gained Thanos the respect of the other super heroes and the love of people around the world. His father also heard of his achievements and pardoned his rebellion. Thanos visited his family on Titan, bringing with him Elizabeth, whom he was now engaged to.

When he returned to Earth, Thanos and Elizabeth were invited to a banquet by Prime Minister Doom of Latveria. There, Thanos and Victor von Doom found in each other kindred souls. Over the next few months they came to consider each other closer than their own kin and swore an oath of brotherhood.

At his marriage ceremony to Elizabeth the next year, Victor was the best man. Because Thanos had no last name, he took on Elizabeth's, becoming Thanos Braddock.

Death (a cosmic entity and Thanos' ex-girlfriend) saw Thanos' happiness at being wed to Psylocke and was overcome with jealousy. Scheming over how to get back at Thanos, she decided to strike Elizabeth with a terminal illness. Thanos, sensing the illness had come from his ex-girlfriend, traveled into her domain to save his wife.

Thanos approached Death, demanding she remove the curse from Elizabeth, a demand Death abruptly refused. Driven into a blind fury, Thanos launched himself at Death. She was too quick for his attack, however, and easily evaded it. She told him that the only way she would cure Elizabeth was if he gave up his new life and came to live with her. Thanos nearly accepted, but the thought of being separated from Elizabeth was too much to bear. Channeling all of his power through the Infinity Gauntlet, Thanos struck Death with a wave of energy that nearly sent her into her own realm.

Taken aback at Thanos' anger, determination, and love for Elizabeth, she told him that he could go home to his wife and not worry because she was already cured. Thanos thanked her and departed from her domain, returning home to Earth.

The next year, Elizabeth (who had indeed been cured) gave birth to twins, one a boy and one a girl. The children bore their father's purple skin, but retained their mother's more human eyes. Thanos and Elizabeth decided to name the girl Athena and the boy Brent.

Retrieved from "https://marvelcomicsfanon.fandom.com/wiki/Thanos_Braddock_(Earth-3082)?oldid=231605"
Community content is available under CC-BY-SA unless otherwise noted.