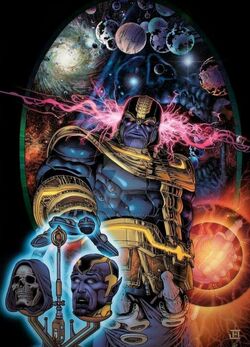 Earth-61712.73
Base Of Operations
The Sanctuary and Sanctuary II, The Black Quadrant
Characteristics
Gender

Well, what do you know? The more, the merrier...

-- Thanos upon discovering the past timeline

Thanos was the youngest and the most menacing and the most sadistic son of A'Lars, progenitor of the second generation colony of Eternals on Titan, and Sui-San, the last survivor of the original generation settlement of Eternals on Titan. Born with grey, hide-like skin and a massive body due to being born with the Deviant Syndrome, Thanos was a morose child who became obsessed with the concept of death, with his own main objective growing up was to bring stability to the universe, as he believed its massive population would inevitably use up the universe's entire supply of resources and condemn it.

During his conquest as a mad and delinquent Titan, both Thanos and his secret armies of darkness invaded multiple planets and slaughtered millions to gain power and influence under his command, something that would go on for years to come before most peace-keeping organization would notice the catastrophic effects that had been caused by his actions. This quest even forced Thanos to sacrifice his parents, King A'Lars and Sui-San, during a rebellious assault on Titan's solar system in order to keep his identity as the perpetrator of the Supreme War from being exposed across the civilized cosmos. With Thanos also having his own older brother Eros in exile weeks before the war began, this previous action made Thanos as the succeeding ruler of Titan by default, as he secretly planned to happen.

However, despite facing off against the powerfully combined opposition and the wrath of Hyperion, Thanos still ultimately triumphed and successfully lured his strongest of enemies into a inescapable trap by having them deal with more personal situations, using it to his advantage and slaying his way into victory, leading to his eventual success of not just ruling his royal Titanian throne, but also ruling most of the civilization across the cosmos. At some point in an alternate future, most of the beings across the universe who continuously fought the now-adult Thanos would be killed due to his gradual rise to power & influence, and his massive insurmountably intergalactic fleet, with the mighty Squadron Supreme having been unable to prevent it for decades. Consumed with hatred and confusion, Hyperion and other weakened higher form of beings were left susceptible to Thanos' modified version of the Tesseract and allied themselves with the forces of Titan becoming a dark, tyrannical ruler of the planet.

Most of the planets across the civilized galaxies conquered and decimated by Thanos, including Earth, were successfully terraformed by the God Machines and the influential Global Directorate was founded by Thanos' allies to aid the completely corrupted Hyperion in his totalitarian rule on Earth, mercilessly killing and enslaving anybody who opposes his cruel rule. The surviving Nighthawk promptly founded the Exiles in order to combat this longing threat, thus beginning a longer conflict, although his unending efforts would eventually prove futile and short-lived. Realizing that all of their hopes would be permanently lost unless they'll prevent the worsening of the infamous Supreme War and the victory of Thanos in his youth to begin with, the Blur, Nighthawk, and other core members of the Exiles finally traveled back to the past, appearing through a vortex of energy that was the Power Primordial as they seek to warn and help the past versions of the Squadron Supreme change their future, even though it is impossible to change their own.

However, this future version of Thanos himself was alerted to the secretive actions of the Exiles through his spies and sleeper agents scattered across the galaxy, resulting in him and his forces traveling into the past through the same method the Exiles had used and laying siege on that past reality, as he had just decided to instead wipe out most of and conquer the multiverse and do it out of revenge for the heroes' unending efforts to stop his younger self from succeeding in the past, starting by traveling to all of the possible alternate timelines in his reality and ruling them before moving on to parallel universes, something that he finds rather more interesting than any discovery and breakthrough that he has previously made in his lifetime. With his new quest of a lifetime, Thanos would start to please Death once more, along the way as he now aims to conquer the multiverse and slay most of its life for his own morbid entertainment, pleasure, and sense of fulfillment.

Along with it, Thanos also began his search for the Tesseract, a godly cosmic energy source imbued in a being only known as the Everywhere Man, giving him the powers to combine and share the strength of an infinite number of his alternate-dimensional counterparts. As Thanos and his starfleet finally kidnapped him in his secretive base of operations and had him put into synthetically-induced catatonia, Thanos and his genius subordinates now finds a way to reverse engineer the Tesseract once he gets it out of the Everywhere Man, with Thanos wishing to fragment himself across every reality throughout the multiverse to ease his main objective of conquest, envisioning a future where every reality has a Thanos that his him and him alone, and is not even hesitant to slay his own "inferior" counterparts if necessary.

Seemingly those to Thanos of Earth-61712, only far more experienced and powerful than his younger self.

Seemingly those to Thanos of Earth-61712, only far more experienced than his younger self.

Seemingly those to Thanos of Earth-61712, only far less than his younger self, including his juvenile physiology.

Equipment: Seemingly those to Thanos of Earth-61712, only has far more access than his younger self.

Transportation: Seemingly those to Thanos of Earth-61712, only has far more access than his younger self.
Weapons:

Retrieved from "https://marvelcomicsfanon.fandom.com/wiki/Thanos_(Earth-61712.73)?oldid=234932"
Community content is available under CC-BY-SA unless otherwise noted.