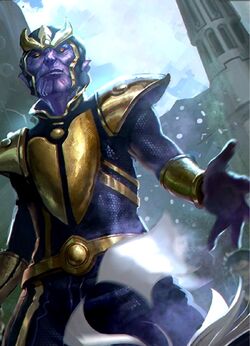 Earth-61712
Base Of Operations
Negative Zone; formerly the Sanctuary, Sanctuary II, The Black Quadrant, and the Kyln
Characteristics
Gender

Alright... So how do you think we'll be able to deal with little Joffrey here? Do we just kill him or what?

Thanos was the youngest and the most menacing and the most sadistic son of A'Lars, progenitor of the second generation colony of Eternals on Titan, and Sui-San, the last survivor of the original generation settlement of Eternals on Titan. Born with grey, hide-like skin and a massive body due to being born with the Deviant Syndrome, Thanos was a morose child who became obsessed with the concept of death (thanks to the secretive influence of his older adoptive brother Loki), with his own main objective growing up was to bring stability to the universe, as he believed its massive population would inevitably use up the universe's entire supply of resources and condemn it.

As a result of this growing and festering obsession within him, he would go to great lengths where he started studying and was first thought to be deluded into worshiping the entity that is Death behind his own parents' back, despite encouraging him to abandon his nihilistic views for he was still a young child, after confirming that he wasn't just simply hallucinating the sacred entity. Through several bionic implementations caused by orders of his strict and authoritative father A'Lars and long hours of meditation and thorough study about his race's nature, Thanos painfully but courageously augmented his Eternal strengths and powers so that his abilities surpassed those of all other Titanian Eternals.

Upon growing up in his early adolescent years, Thanos, who also now known as the Dark Lord by his loyal servants and the Mad Titan by the galactic communities, is a powerful, cosmic warlord who rules over a distant region of space and commands two massive armies, known as the Chitauri and the Outriders. Originally, the Chitauri were the only known massive force the Titan had since the Titanian Empire's first conquests, but because of the unruly and oversimplified nature of the Chitauri hive mind, Thanos desired a more controllable, autonomous and more aggressive fighting force and began experimenting on his own genetic creations. Using his recently deceased uncle, Zuras' essence of DNA as well as that of the Chitauri, the Dark Lord and his clandestine science council engineered a new race of creatures that he then dubbed the Outriders, whose sole purpose was to serve their master until they die.

With most of the people in Titan still believing he was a mere innocent child who was abused by his "careless" parents. Despite his unusual appearance and introvert nature, however, Thanos was well accepted by his peers, albeit his friends and acquaintances were mostly adults in his society, while most of his fellow neighboring children still reject him to join them, believing that Thanos was "too bizarre" to "exist as a child." Nevertheless, Thanos never much cared about the continuous discrimination he was facing in his youth, since he was a mild-mannered intellectual after, who dreamed of becoming a scientist like his neglectful father. However, signs of his true, dark nature started to creep up early on in his delinquency as he secret grew up being influenced by the philosophical teachings of the darkest minds in the history of the universe, most notably Death herself, his secret cosmic mentor.

Eventually, Thanos came up to a deluded but cleverly convincing realization that he was not like most of his people, that he was different from other Titanian children, who his forefathers believed were the "future of the planet." Remembering the old saying, Thanos now believes that he is the future of their planet. As a result of his new perspective in his young life, Thanos used his facade of innocence to his advantage to formulate a series of plans to overthrow his family throne, to which he started by triggering a series of events that would change the course of history across the universe forever. Thanks to his mind and power of influence, the young Thanos sparked the ultimately chaotic and unstoppable Supreme War, a conflict that first began as a simple disagreement with Titan's intergalactic affairs with other planetary communities, only to grow rapidly in the form of the greatest pangalactic war in the history of this universe, since the Dark & Forgotten Invasion of the Builders.

During his conquest as a mad and delinquent Titan, both Thanos and his secret armies of darkness invaded multiple planets and slaughtered millions to gain power and influence under his command, something that would go on for years to come before most peace-keeping organization would notice the catastrophic effects that had been caused by his actions. This quest even forced Thanos to sacrifice his parents, King A'Lars and Sui-San, during a rebellious assault on Titan's solar system in order to keep his identity as the perpetrator of the Supreme War from being exposed across the civilized cosmos. With Thanos also having his own older brother Eros in exile weeks before the war began, this previous action made Thanos as the succeeding ruler of Titan by default, as he secretly planned to happen.

Fall of a Young King

The young and genius Thanos, however, would soon found himself and his plans' challenged by a mutual alliance comprising the universes' greatest superhero teams, which included the Squadron Supreme, Spectrum Society, the Nova Corps, and other peace-keeping organizations as they aim to end the worsening Supreme War, as well as finding out the true individual responsible for igniting the war from occurring and being him into justice for his crimes against the universe, Thanos himself. With the help of their own future counterparts along with other future visitors such as the former villain Perses, they were able to figure out earlier that a young Thanos was the true perpetrator of the Supreme War since the beginning, giving them the advantage to make a better plan to apprehend the young universal threat. In the final confrontation of the heroes against Thanos, the once mysterious Perses, who revealed himself to be an unhinged and broken future version of Eros (Thanos' older brother), willingly sacrificed his own life to save Thanos from those who were willing to kill him, believing in the optimistic belief that his younger brother could still change and killing him wouldn't do anything good but harm, making the Squadron Supreme realize that the former villain was right all along.

Powerless without his influences, his most powerful inventions and him being almost completely weakened from the final battle, the alliance of heroes was able to use their opportunity to knock out Thanos and restrain him, where he was later handed over and arrested by the Galactic Council, with Thanos offering no resistance as he was taken into custody. Thanos was then ultimately jailed and as a universe-class threat for his exposed numerous unspeakable crimes, first in the intergalactic prison Kyln, and then in an interstellar prison and asylum located at the dark regions of the Negative Zone, in hopes that he could still be rehabilitated in his state as a minor being. Despite being imprisoned for, the heroes were still unaware of who the culprit that demonized the mind of Thanos at such a young age, who was none other than his suspicious older adoptive brother Loki. The only reason Thanos couldn't tell everyone anything about Loki's involvement was due to the actions of the latter gas-lighting his little brother with different types of sorcery, cursing Thanos with a spell that could only be broken once he either dies or another sorcerer gets to figure out how to unlock Loki's complex magic.

However, despite facing off against the powerfully combined opposition and the wrath of Hyperion, Thanos still ultimately triumphed and successfully lured his strongest of enemies into a inescapable trap by having them deal with more personal situations, using it to his advantage and slaying his way into victory, leading to his eventual success of not just ruling his royal Titanian throne, but also ruling most of the civilization across the cosmos. At some point in an alternate future, most of the beings across the universe who continuously fought the now-adult Thanos would be killed due to his gradual rise to power & influence, and his massive insurmountably intergalactic fleet, with the mighty Squadron Supreme having been unable to prevent it for decades. Consumed with hatred and confusion, Hyperion and other weakened higher form of beings were left susceptible to Thanos' modified version of the Tesseract and allied themselves with the forces of Titan becoming a dark, tyrannical ruler of the planet.

Most of the planets across the civilized galaxies conquered and decimated by Thanos, including Earth, were successfully terraformed by the God Machines and the influential Global Directorate was founded by Thanos' allies to aid the completely corrupted Hyperion in his totalitarian rule on Earth, mercilessly killing and enslaving anybody who opposes his cruel rule. The surviving Nighthawk promptly founded the Exiles in order to combat this longing threat, thus beginning a longer conflict, although his unending efforts would eventually prove futile and short-lived. Realizing that all of their hopes would be permanently lost unless they'll prevent the worsening of the infamous Supreme War and the victory of Thanos in his youth to begin with, the Blur, Nighthawk, and other core members of the Exiles finally traveled back to the past, appearing through a vortex of energy that was the Power Primordial as they seek to warn and help the past versions of the Squadron Supreme change their future, even though it is impossible to change their own.

Following the end of Supreme War, Thanos then ensured his actions could never be counteracted by destroying most of the planets he had encountered with the explosive device he had his forces implanted on every single one of the planets' core, the Squadron Supreme was finally able to him down on Titan to confront him for what he has done, before then being furiously assassinated by the unhesitant Nighthawk, mercilessly killing the mad child in his own bedroom. At some point in an alternate future, this powerful and unbelievable action of the Squadron Supreme would've sparked a far worse conflict than what Thanos had already triggered. Much to the grief and outrage of Thanos' brother Eros, the latter (who was also slowly manipulated by Death herself just as she manipulated his brother) declared a "war against the entire universe" to avenge his little brother.

Mutant Titanian Physiology: By far potentially the strongest and most powerful Titanian Eternal there is, Thanos is a superhuman mutant whose massive, heavy-bodied form was born with the capacity to synthesize cosmic energy for certain personal uses. Thanos has increased his powers through bionic amplification, mystical enhancement, and as a result of being resurrected by Death itself.

Even as a delinquent Titanian, he was already deemed a Category 1 Life Ender by the official classification of the Spectrum Society, to have an "universal" threat level and to have been a one-time Reality Ender, and was seemingly a Cosmic-level threat, being sent by the Shi'ar Imperial Guard to the core cell of a galactic gulag at some point in his life after the cosmic events of the Supreme War, something Thanos himself, a mere child, was the main mastermind behind of starting in the first place.

Retrieved from "https://marvelcomicsfanon.fandom.com/wiki/Thanos_(Earth-61712)?oldid=264656"
Community content is available under CC-BY-SA unless otherwise noted.