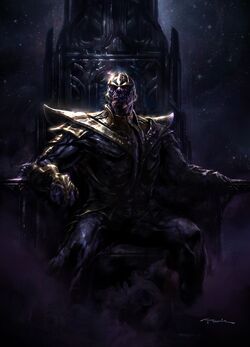 Earth-61615.8
Base Of Operations
The Sanctuary and Sanctuary II
Characteristics
Gender

I will shred this universe, down to its last atom. And with the stones you've collected for me, create a new one. Teeming with life, they'll know not what it has lost, but what it has been given. A grateful universe...

Thanos was one of the last sons of A'Lars, progenitor of the second colony of Eternals on Titan, and Sui-San, the last survivor of the original settlement of Eternals on Titan. Born with grey, hide-like skin and a massive body due to being born with the Deviant Syndrome, Thanos was a morose child who became obsessed with the concept of death, with his own main objective growing up was to bring stability to the universe, as he believed its massive population would inevitably use up the universe's entire supply of resources and condemn it.

Before the Invasion, Thanos seemed to have the same history with his Earth-61615 counterpart, up until his situational servant that was the diabolical Asgardian God of Mischief Loki was able to successfully fool the Avengers and the rest of Earth's mightiest heroes like them, during the significant Battle of New York into fighting his mirage or illusion, while the villain continues to his to spread the chaos caused by his single-minded and bloodthirsty army coming through the wormhole created by the Tesseract. As a devastating consequence to his effective strategy, the invasion of the timeline itself was prolonged for more than a few weeks, longer than it was supposed to be.

Despite his vast armies of the Chitauri and powerful weaponry, Loki was eventually defeated during the Battle of New York, which had also then resulted with both the Scepter-laden Infinity Stone and the Tesseract falling into the hands of the extreme A.I. Ultron who proceeded to destroy the stones afterwards after knowing its universal power and how it should be destroyed in order to prevent powerful beings from acquiring it, along with Ultron mercilessly killing Loki, believing it would avenged those who perished during the Invasion whom Loki was partly responsible for. The Other then reported to his master how the inhabitants of Earth were not as weak as they were thought to be. He also declared that challenging the Earth's heroes would be to court Death. Thanos rose to his feet and smiled at the prospect of what was coming.

After meeting Death in a hallucinatory realm once more, his main objective is to set the course of extensive search for the Infinity Stones for the sake of getting to please her, and his desire to achieve this goal is what led him to forging deals with the villains and rogue warriors, most notably Loki and Ronan the Accuser in their respective campaigns against Earth and Xandar. Both of these alliances cost Thanos much of his resources, including one of the stones, his servant The Other, and the loyalty of his favorite daughter, Gamora. Eventually, an enraged but still prepared Thanos lost his patience with the ultimate failure of his servants and opted to seek out the remaining Stones personally, now all by himself and his personal forces of dominion.

Following the failure of Loki to retrieve two of the Infinity Stones' on Earth, Thanos engaged in a ferocious crusade in order to obtain the Infinity Stones. During his mission, both Thanos and his Black Order invaded multiple planets and slaughtered thousands with ease in pursuit of gaining the stones, in which they successfully retrieved the remaining four which he still deemed to be useful, now that he has the Time Stone in his hands, theorizing that he may be able to restored the destroyed Space and Mind Stones by the time he comes to Earth. Setting his course to Earth whilst on his command ship Sanctuary II, Thanos and have found themselves trapped in an ambush by an oddly familiar force (only fewer compared to his), and an oddly familiar face, whose forces suddenly appeared in front of them through a wormhole, heading towards their direction.

As the opposing opposing side introduced himself, Thanos was satisfied to meet that it was his older, alternate reality self which led to him trying to join forces with him in his assault on Earth and grasp the remaining the Infinity Stones, explaining what he would do once he would finally get his hands on the universal artifacts and unite it: rebuilding the universe in its own image. The older Thanos seemed interested, especially after his younger self demonstrated the powers of the Stone, before the former asked him about the Tesseract. The younger Thanos seemed perplexed to why his older self was only interested in one of the stones, not aware that the older one was looking for something greater than just an encasement for an Infinity Stone, referring to a "real" Tesseract. Due to both the Thanos' misunderstandings, the younger one disregarded their distinctions and simply focused on the very alliance he had proposed for each other. The older Thanos smirked, seemingly in agreement with his proposal, only to swiftly impale the younger Mad Titan with both his and his own Double-Edged Sword.

The expression this reality's Thanos could give was only the look of shock due to his older self's sudden betrayal. His Black Order only witnesses the slaughter as they feel betrayed, yet confused seeing whether they can trust the older self of their master. The older Thanos then assured his younger self that he would do his goal for his own sake, only to claim that there could only be one of them to live. Pulling the swords he impaled on the younger Titan, the latter was mortally wounded as his rage and anger tries to keep him alive. Despite bleeding rapidly, Thanos tries to take on with his older self bare hands, but he was just too weak at such a situation wherein others would instantly die. His older self was amused of his perseverance, but the former still reminded that he sticks to his words, giving a powerful blow with a single fist that snaps his younger self's neck. The younger Mad Titan drops on the floor of his ship, dead. Looking at his corpse, the victor of the duel believed that what he has done was something he considered to be "merciful." In Thanos' death, his Black Order was spared since the older has never met anyone like them before, subsequently absorbing them along with the rest of Thanos' fleet into the older forces' ranks before continuing his younger self's goal for completing the Infinity Stones, along with his own personal quest for the great Tesseract.

Retrieved from "https://marvelcomicsfanon.fandom.com/wiki/Thanos_(Earth-61615.8)?oldid=265299"
Community content is available under CC-BY-SA unless otherwise noted.