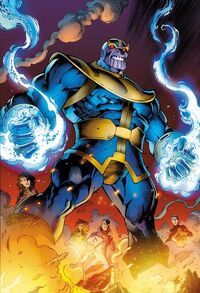 Thanos was the son of A'Lars and Sui-San, the king and queen of the big city known as Trisondias, on the planet Titan, a planet that was colonised by the powerful race called The Eternals. Although his parents and their people were all peaceful, Thanos wanted them to rule the entire planet. His parents refused, so he poisened them. When they were both dead, Thanos became king of Trisondias.

When Thanos became king, he started planning wars. He made his people believe that the other Eternals on Titan had killed his parents, and that they wanted to get rid of Trisondias. Soon, a war broke out, resulting into Thanos becoming the king of Titan. But that was not where he finished.

Thanos created a race of robots called ULTRON. They became the main soldiers of his army, and soon, there were more ULTRONS on Titan than Eternals. Eventually, Thanos ordered his ULTRONS to attack the people. They did so, and only a few survived. He then created a battle fleet to travel back to the Eternals' home planet and destroy it with a massive bomb. Before the Eternals realised what Thanos was planning to do, he launched the bomb, and the planet was destroyed. Thanos then ordered the ULTRONS to seek and destroy the last Eternals in the universe.

Now he was one of the last Eternals left in the universe, Thanos travelled the stars with his ULTRON army. He invaded planets, and claimed that he was a god. He enslaved entire races and species, and even killed some. Many armies tried to stop him, but the ULTRON army grew and Thanos' forces were too strong.

Thanos created his main base on the planet Arzargiz, which was an empty desert planet with a purple sky. As the planet was full of precious minerals, he put a massive slave camp on the planet. He also build a giant palace there, in which he would live, although he wasn't there very often, as he usually was on the command ship of his enormous battle fleet.

During his attempted invasion of the universe, Thanos came across another really powerful being who claimed to be a god; Axon. Thanos intended to bond with Axon, but the other so called 'god' had other plans, and destroyed two battle ships of Thanos' ULTRON army. Thanos decided to fight against Axon himself, and the two soon began their incredible battle, which lasted for days.

At some part during their battle the two unleashed massive amounts of energy at each other. They both missed, however, and the wave of energy flew into the universe. It hit a space shuttle from the planet Earth that was trying to catch and get information about a Solar Flare. The five people onboard the spaceship got affected by the wave of energy, and got incredible powers. Four of them formed a superhero team called The Fantastic Four, and the fifth one became a supervillain and the Fantastic Four's biggest enemy, known as Doctor Doom.

Eventually they ended up on Arzarqiz, and continued their battle in Thanos' palace. Half of the palace was destroyed during the battle, but at last Thanos won, and killed Axon. With that he proved that he was one of the most powerful beings in the universe. He was wrong, however...

At some point during his attempted invasion of the universe, Thanos decided to invade the Nine Realms, starting with Asgard, and after that Vanaheim and Jotunheim. This was a bad idea, however, as the Asgardians, the Vanir, the Mountain-, Storm- and Frost Giants bonded together to stop the invasion.

As the ULTRON army landed on Asgard, they found themselves under attack by the bonded races, which had formed a giant army. The landed ships were immediately destroyed, and the others in the sky followed soon.

After his invasion fleet was destroyed during his attempted invasion of the Nine Realms, only six of Thanos' ships remained. The Asgardians had send a message through the universe to tell all other races and species about the now tiny battle fleet, so they had to hide to survive. This eventually brough Thanos back to Arzarqiz, only to discover that his base and palace had been destroyed, and that all the slaves had escaped and stolen the ships.

After this Thanos became extremely stressed, till a point were he eventually gave up on his conquest of the universe. He blew up the planet to leave no traces behind. This was an extremely bad decision, though, as the giant explosion was soon noticed by an intergalactic police force. Thanos' last ships were destroyed, and he was taken as a prisoner. They then froze him in suspended animation.

Although most of Thanos' army had been destroyed, a single ULTRON soldier escaped in an escape pod. The pod was ripped apart by meteorites soonly afterwards, though, and crash-landed on Earth. The pod was discovered by Avengers-member and scientist Hank Pym, who intended to partly rebuild the robot and make it part of Tony Stark's new world peace project.

This was very wrong, however, as the now new Ultron got a mind of his own, with only one memory left; conquer the universe! After intending to destroy the Helicarrier, he was fought and defeated by several S.H.I.E.L.D. and Avengers members. Ultron survived and escaped, however, and upgraded several times. He then became a big enemy of the Avengers and Earth itself!

Retrieved from "https://marvelcomicsfanon.fandom.com/wiki/Thanos_(Earth-5454)?oldid=69940"
Community content is available under CC-BY-SA unless otherwise noted.