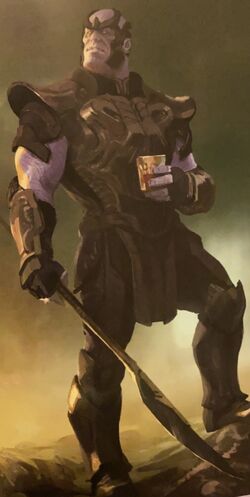 It's time we won this war, Quill. By any means necessary.

The Mad Titan Thanos has spread his will of death and tyranny across the galaxy, but even he could not have predicted the sudden onslaught unleashed by the Order of the World Tree.

Feeling slighted and disavowed, Thanos set out to tear the Order down piece by piece. His new purpose set him directly in line with the Guardians of the Galaxy, the merry crew that his favorite daughter, Gamora, was a part of before she died.

Retrieved from "https://marvelcomicsfanon.fandom.com/wiki/Thanos_(Earth-2001)?oldid=260918"
Community content is available under CC-BY-SA unless otherwise noted.